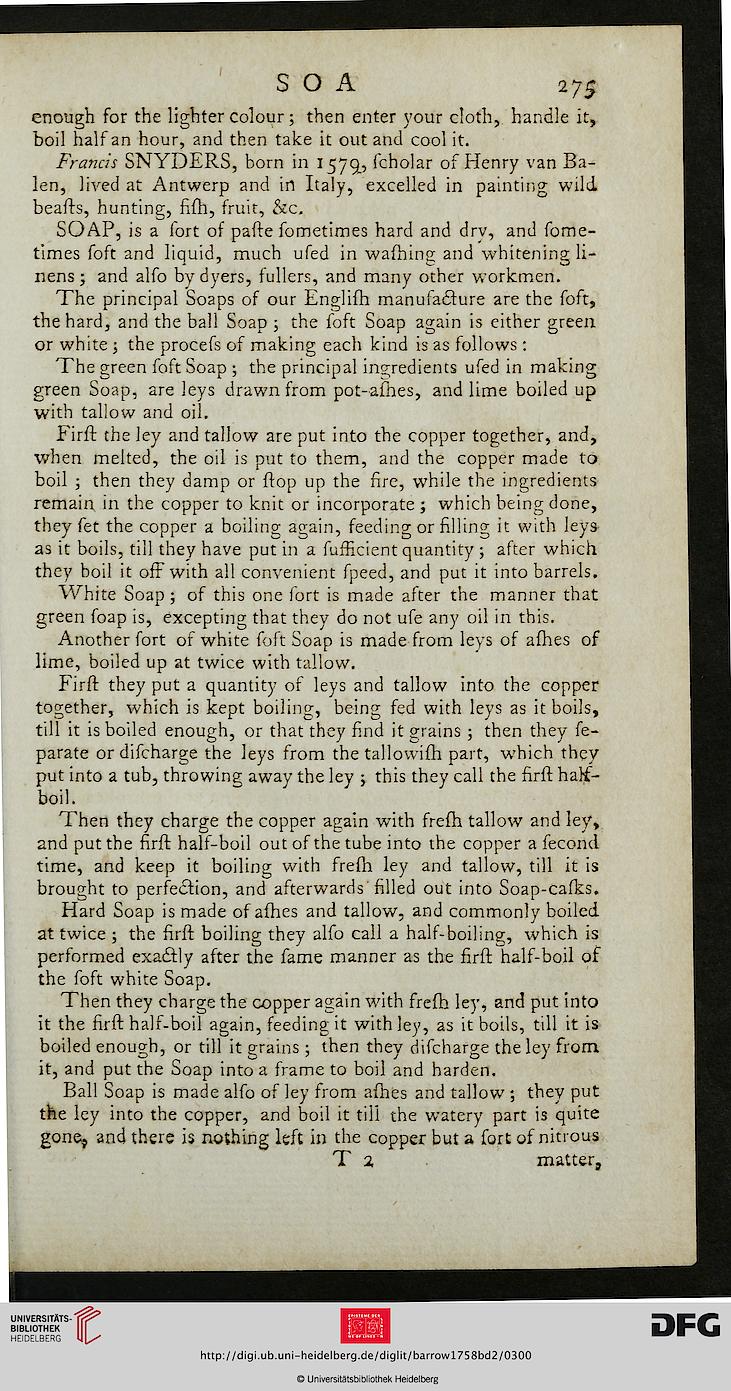 enough for the lighter colour; then enter your cloth, handle it,
boil half an hour, and then take it out and cool it.

SOAP, is a fort of pafte fometimes hard and drv, and fome-
times foft and liquid, much ufed in warning and whitening li-
nens ; and alfo by dyers, fullers, and many other workmen.

The principal Soaps of our Englifh manufacture are the foft,
the hard, and the ball Soap ; the foft Soap again is either green
or white ; the procefs of making each kind is as follows :

The green foft Soap ; the principal ingredients ufed in making
green Soap, are leys drawn from pot-afb.es, and lime boiled up
with tallow and oil.

Firft the ley and tallow are put into the copper together, and,
when melted, the oil is put to them, and the copper made to
boil ; then they damp or flop up the fire, while the ingredients
remain in the copper to knit or incorporate ; which being done,
they fet the copper a boiling again, feeding or filling it with ley*
as it boils, till they have put in a fufficient quantity ; after which
they boil it off with all convenient fpeed, and put it into barrels.

White Soap; of this one fort is made after the manner that
green foap is, excepting that they do not ufe any oil in this.

Another fort of white foft Soap is made from leys of allies of
lime, boiled up at twice with tallow.

Firft they put a quantity of leys and tallow into the copper
together, which is kept boiling, being fed with leys as it boils,
till it is boiled enough, or that they find it grains ; then they fe-
parate or difcharge the leys from thetallovvifh part, which they
put into a tub, throwing away the ley ; this they call the firft half-
boil.

Then they charge the copper again with frefh tallow and ley,
and put the firft half-boil out of the tube into the copper a feconcl
time, and keep it boiling with frefh ley and tallow, till it is
brought to perfection, and afterwards filled out into Soap-cafks.

Hard Soap is made of afhes and tallow, and commonly boiled
at twice ; the firft boiling they alfo call a half-boiling, which is
performed exactly after the fame manner as the firft half-boil of
the foft white Soap.

Then they charge the copper again with frefh ley, and put into
it the firft half-boil again, feeding it with ley, as it boils, till it is
boiled enough, or till it grains ; then they difcharge the ley from
it, and put the Soap into a frame to boil and harden.

Ball Soap is made alfo of ley from afhes and tallow ; they put
the ley into the copper, and boil it till the watery part is quite
gone, and there is nothing left in the copper but a fort of nitrous