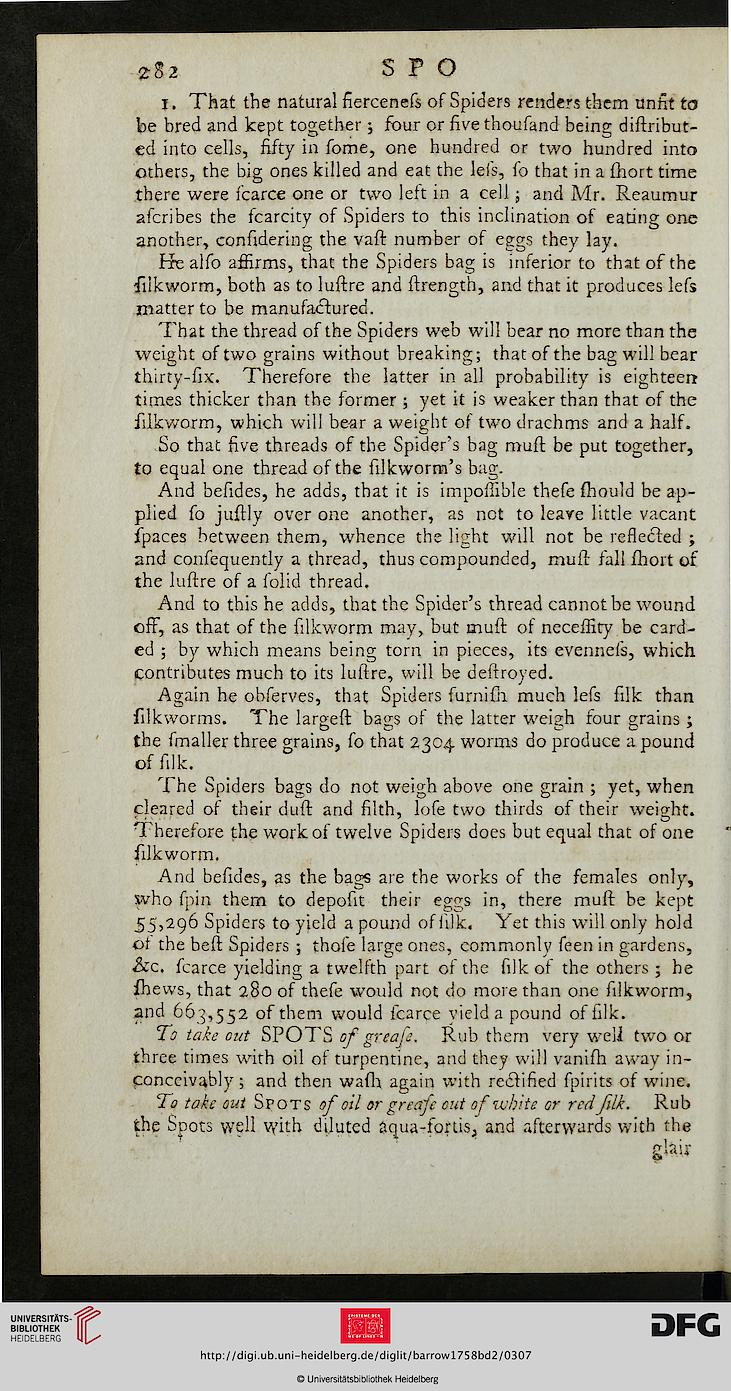 i. That the natural fiercenefs of Spiders renders them unfit to
be bred and kept together; four or five thoufand being diftribut-
cd into cells, fifty in fome, one hundred or two hundred into
others, the big ones killed and eat the lefs, fo that in a fhort time
there were fcarce one or two left in a cell; and Mr. Reaumur
afcribes the fcarcity of Spiders to this inclination of eating one
another, confidering the vaft number of eggs they lay.

fre alfo affirms, that the Spiders bag is inferior to that of the
filkworm, both as to luftre and ftrength, and that it produces lefs
matter to be manufactured.

That the thread of the Spiders web will bear no more than the
weight of two grains without breaking; that of the bag will bear
thirty-fix. Therefore the latter in all probability is eighteen
times thicker than the former ; yet it is weaker than that of the
filkworm, which will bear a weight of two drachms and a half.

So that five threads of the Spider's bag muft be put together,
to equal one thread of the fillcworm's bag.

And befides, he adds, that it is impoffible thefe fhould be ap-
plied fo juftly over one another, as net to leave little vacant
fpaces between them, whence the light will not be reflected ;
and confequently a thread, thus compounded, muil fall fhort of
the luftre of a folid thread.

And to this he adds, that the Spider's thread cannot be wound
off, as that of the filkworm may, but muft of neceffity be card-
ed ; by which means being torn in pieces, its evennefs, which
contributes much to its luftre, will be deftroyed.

Again he obferves, that Spiders furnifh much lefs filk than
filkworms. The larger! bags of the latter weigh four grains ;
the fmaller three grains, fo that 2304 worms do produce a pound
of filk.

The Spiders bags do not weigh above one grain ; yet, when
cleared of their duff and filth, lofe two thirds of their weight.
Therefore the work of twelve Spiders does but equal that of one
filkworm.

And befides, as the bags are the works of the females only,
who fpin them to depofit their eggs in, there muft be kept
55,296 Spiders to yield a pound of filk. Yet this will only hold
of the beft Spiders ; thofe large ones, commonly feen in gardens,
&c. fcarce yielding a twelfth part of the filk of the others ; he
fhevvs, that 280 of thefe would not do more than one filkworm,
and 663,552 of them would fcarce vield a pound of filk.

To take cut SPOTS of grcafj. Rub them very well two or
three times with oil of turpentine, and they will vanifh away in-
conceivably; and then wafh again with rectified fpirits of wmc.

To take out Spots of oil or greaje cut of white or red filk. Rub
the Spots well with diluted aqua-fortis, and afterwards with the