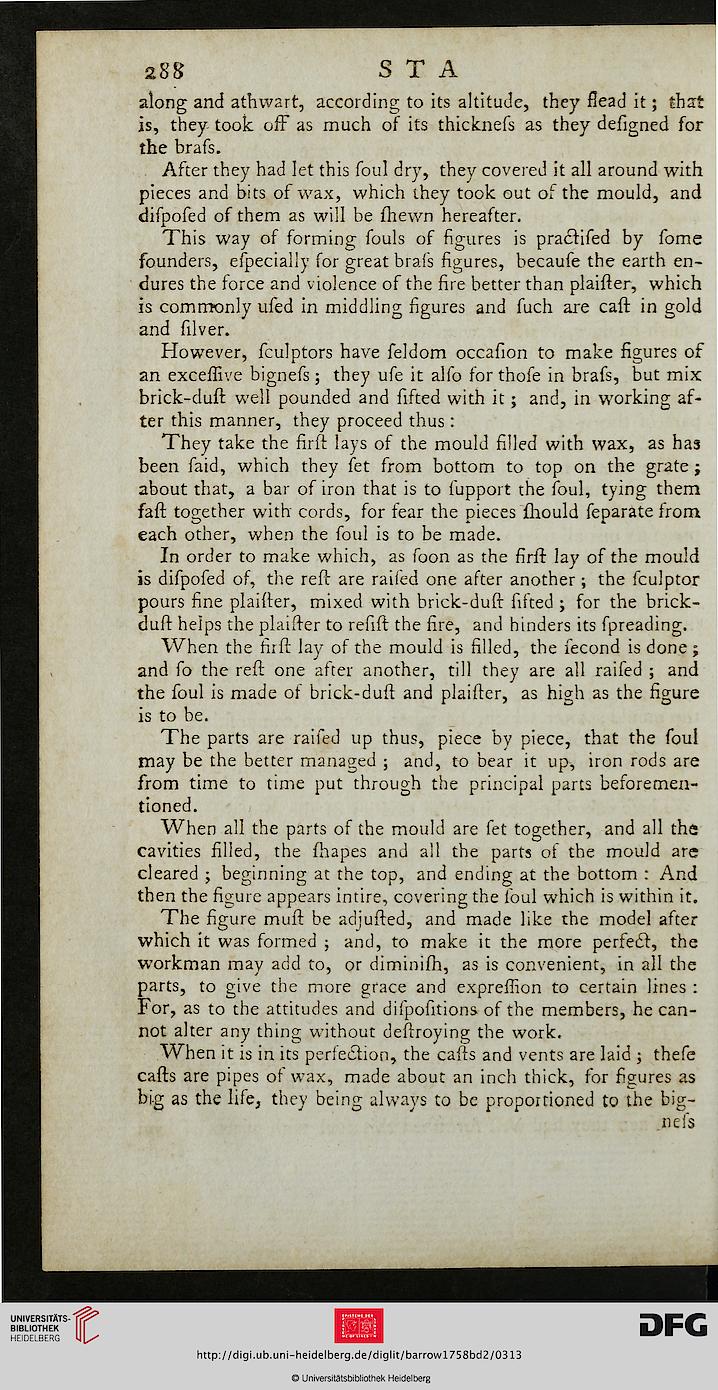 along and athwart, according to its altitude, they flead it; that
is, they took off as much of its thicknefs as they defigned for
the brafs.

After they had let this foul dry, they covered it all around with
pieces and bits of wax, which they took out of the mould, and
difpofed of them as will be fhewn hereafter.

This way of forming fouls of figures is practiSed by fome
founders, especially for great brafs figures, becaufe the earth en-
dures the force and violence of the fire better than plaifter, which
is commonly ufed in middling figures and fuch are call in gold
and filver.

However, fculptors have feldom occafion to make figures of
an exceffive bignefs; they ufe it alfo for thofe in brafs, but mix
brick-duft well pounded and fifted with it; and, in working af-
ter this manner, they proceed thus:

They take the firft lays of the mould filled with wax, as has
been faid, which they fet from bottom to top on the grate ;
about that, a bar of iron that is to Support the foul, tying them
faff, together with cords, for fear the pieces Should feparate from
each other, when the foul is to be made.

In order to make which, as foon as the firft lay of the mould
is difpofed of, the reft are raifed one after another; the fculptor
pours fine plainer, mixed with brick-duft fifted ; for the brick-
duft helps the plaifter to refill the fire, and hinders its fpreading.

When the firft lay of the mould is filled, the Second is done;
and fo the reft one after another, till they are all raifed ; and
the Soul is made of brick-duft and plaifter, as high as the figure
is to be.

The parts are raifed up thus, piece by piece, that the foul
may be the better managed ; and, to bear it up, iron rods are
from time to time put through the principal parts beforemen-
tioned.

The figure muft be adjufted, and made like the model after
which it was formed ; and, to make it the more perfecl:, the
workman may add to, or diminifh, as is convenient, in all the
parts, to give the more grace and expreffion to certain lines :
For, as to the attitudes and difpofitions of the members, he can-
not alter any thing without destroying the work.

When it is in its perfection, the cafts and vents are laid ; thefe
cafts are pipes of wax, made about an inch thick, for figures as
big as the life, they being always to be proportioned to the big-
nefs