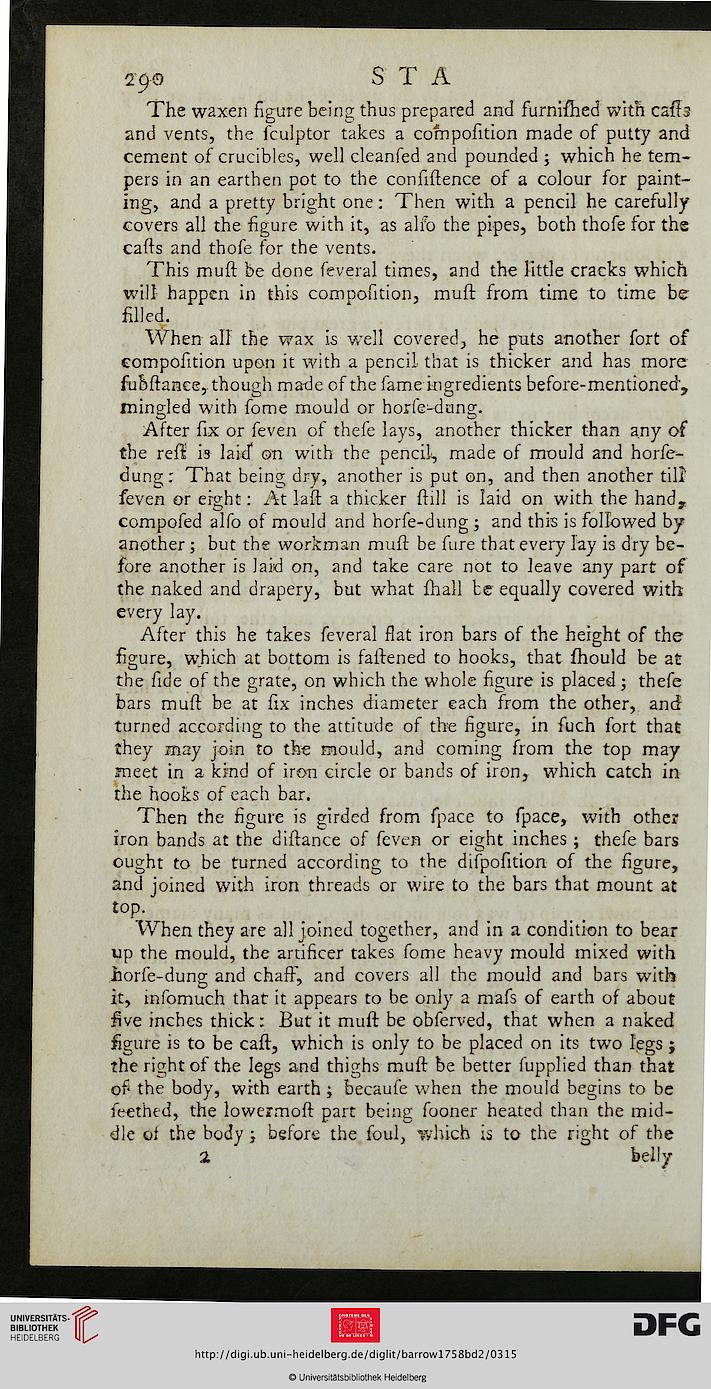 The waxen figure being thus prepared and furnifhed with caffs
and vents, the fculptor takes a cofnpofition made of putty and
cement of crucibles, well cleanfed and pounded ; which he tem-
pers in an earthen pot to the confidence of a colour for paint-
ing, and a pretty bright one : Then with a pencil he carefully
covers all the figure with it, as alio the pipes, both thofe for the
cafts and thofe for the vents.

This muft be done feveraj times, and the little cracks which
will happen in this compofition, muft from time to time be
filled.

When all the wax is well covered-, he puts another fort of
compofition upon it with a pencil that is thicker and has more
fubftance, though made of the fame ingredients before-mentioned,
mingled with fome mould or horfe-dnng.

After fix or feven of thefe lays, another thicker than any of
the reft i3 laid* on with the pencil, made of mould and horfe-
dung: That being dry, another is put on, and then another till
feven or eight: At Iaft a thicker (till is laid on with the hand,
compofed alfo of mould and horfe-dung ; and this is followed by
another ; but the workman muft be fare that every lay is dry be-
fore another is laid on, and take care not to leave any part of
the naked and drapery, but wThat fhall be equally covered with
every lay.

After this he takes feveral flat iron bars of the height of the
figure, which at bottom is fattened to hooks, that fhould be at
the fide of the grate, on which the whole figure is placed; thefe
bars muft be at fix inches diameter each from the other, and
turned according to the attitude of the figure, in fuch fort that
they may join to the mould, and coming from the top may
meet in a kind of iron circle or bands of iron, which catch in
the hooks of each bar.

Then the figure is girded from fpace to fpace, with other
iron bands at the diftance of feven or eight inches ; thefe bars
ought to be turned according to the difpofition of the figure,
and joined with iron threads or wire to the bars that mount at
top.

When they are all joined together, and in a condition to bear
up the mould, the artificer takes fome heavy mould mixed with
iorfe-dung and chaff, and covers all the mould and bars with
it, mfomuch that it appears to be only a mafs of earth of about
five inches thick: But it muft be obferved, that when a naked
figure is to be caft, which is only to be placed on its two legs ;
the richtof the legs and thighs muft be better fupplied than that
of the body, with earth ; becaufe when the mould begins to be
feethed, the lowermoft part being fuoner heated than the mid-
dle of the body ; before the foul, which is to the right of the
2 belly