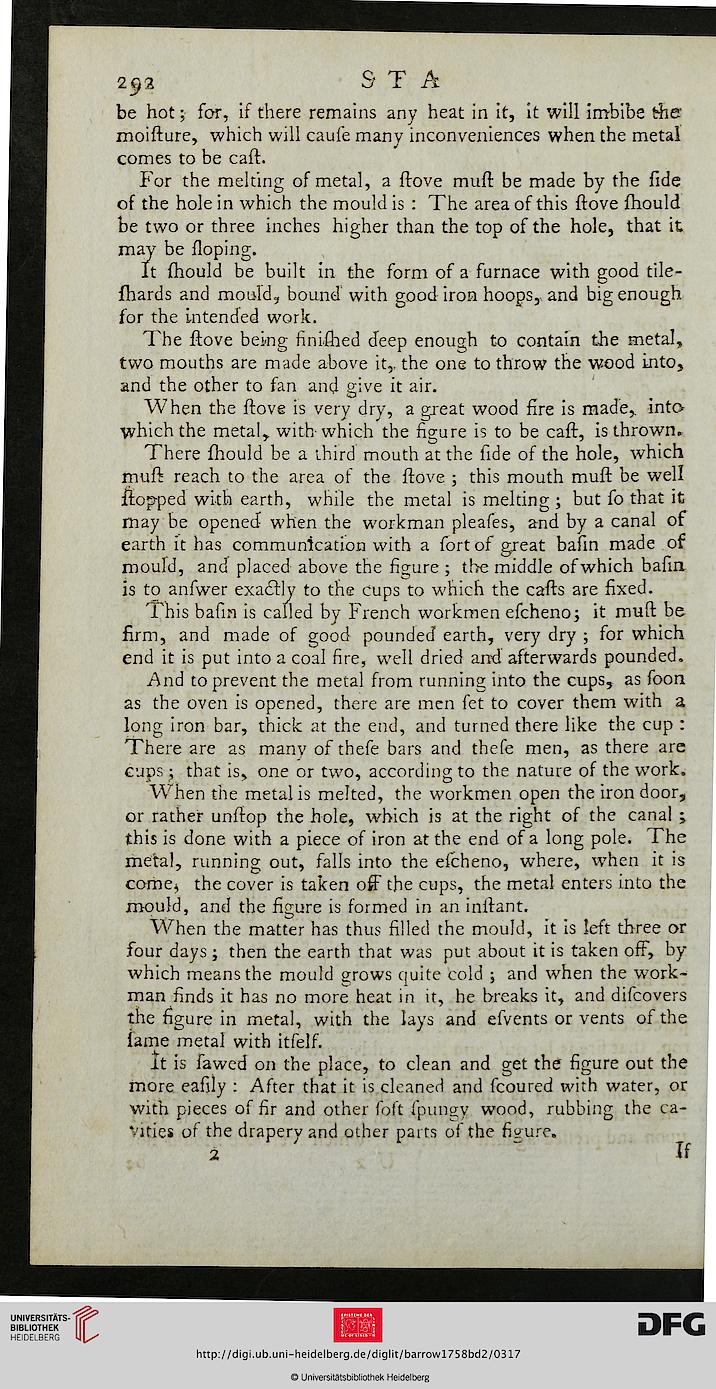 be hot; for, if there remains any heat in it, it will imbibe rfie
moifture, which will caufe many inconveniences when the metal
comes to be caft.

For the melting of metal, a (rove muft be made by the fide
of the hole in which the mould is : The area of this ftove fhould
be two or three inches higher than the top of the hole, that it
may be floping.

it mould be built in the form of a furnace with good tile-
fhards and mould, bound with good iron hoops, and big enough
for the Intended work.

The ftove being finished deep enough to contain the metal,
two mouths are made above it, the one to throw the wood into,
and the other to fan and give it air.

When the ftove is very dry, a great wood fire is made,, into-
which the metal, with which the figure is to be caft, is thrown.

There fhould be a third mouth at the fide of the hole, which
muft reach to the area of the ftove ; this mouth muft be well
flopped with earth, while the metal is melting ; but fo that it
may be opened when the workman pleafes, and by a canal of
earth it has communication with a fort of great bafin made of
mould, and placed above the figure ; the middle of which bafin
is to anfwer exactly to the cups to which the cafts are fixed.

This bafin is called by French workmen efcheno; it muft be
firm, and made of good pounded earth, very dry ; for which
end it is put into a coal fire, well dried and afterwards pounded.

And to prevent the metal from running into the cups, as foon
as the oven is opened, there are men fet to cover them with a
long iron bar, thick at the end, and turned there like the cup :
There are as manv of thefe bars and thefe men, as there are
cups; that is> one or two, according to the nature of the work.

When the metal is melted, the workmen open the iron door,
or rather unftop the hole, which is at the right of the canal ;
this is done with a piece of iron at the end of a long pole. The
metal, running out, falls into the efcheno, where, when it is
come* the cover is taken off the cups, the metal enters into the
mould, and the figure is formed in an inftant.

When the matter has thus filled the mould, it is left three or
four days; then the earth that was put about it is taken off", by
which means the mould grows quite cold ; and when the work-
man finds it has no more heat in it, he breaks it, and difcovers
the figure in metal, with the lays and efvents or vents of the
fame metal with itfelf.

it is fawed on the place, to clean and get the figure out the
more eafily : After that it is cleaned and fcoured with water, or
with pieces of fir and other (oft (pungy wood, rubbing the ca-
nities of the drapery and other parts of the figure.