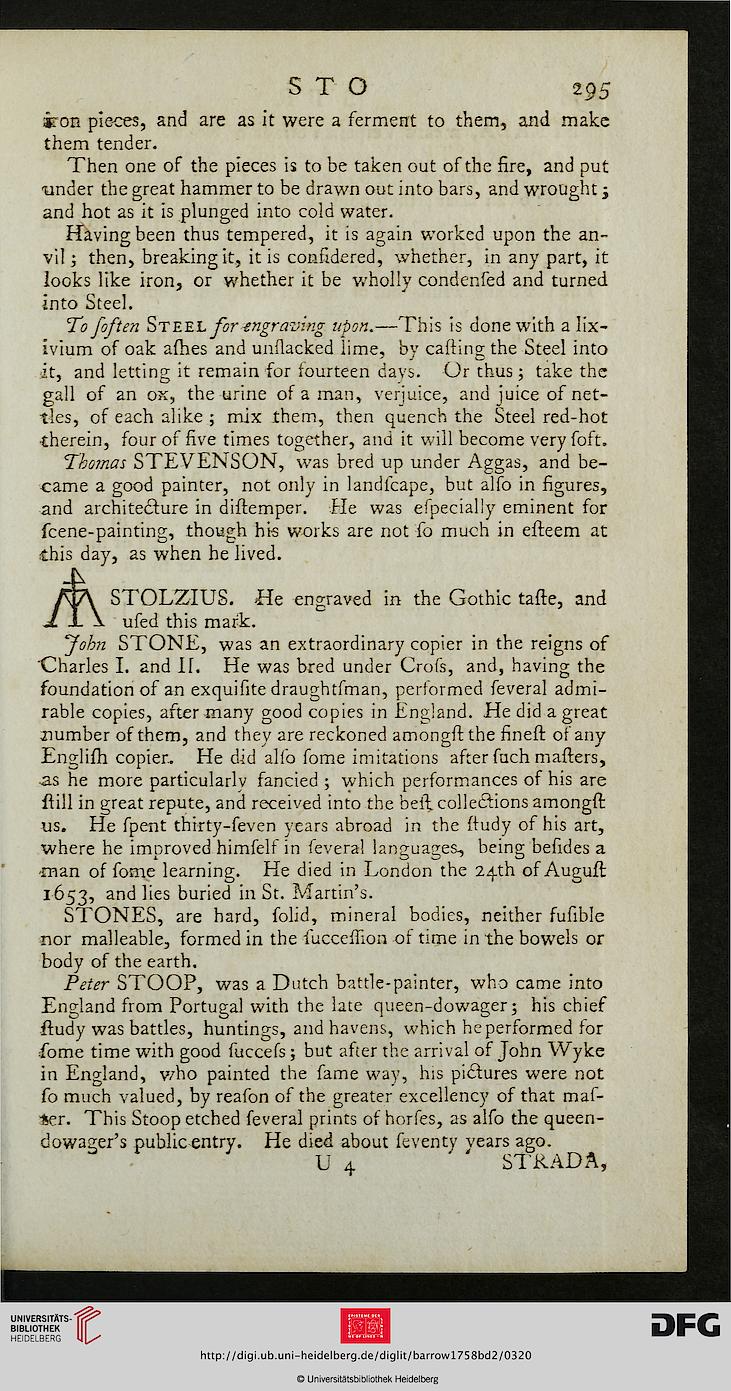 iron pieces, and are as it were a ferment to them, and make
them tender.

Then one of the pieces is to be taken out of the fire, and put
•under the great hammer to be drawn out into bars, and wrought;
and hot as it is plunged into cold water.

Having been thus tempered, it is again worked upon the an-
vil ; then, breaking it, it is confidered, whether, in any part, it
looks like iron, or whether it be wholly condenfed and turned
into Steel.

To /often Steel for engraving upon.—This is done with a lix-
ivium of oak afhes and unflacked iime, by cafting the Steel into
it, and letting it remain for fourteen days. Or thus; take the
gall of an ok, the urine of a man, verjuice, and juice of net-
tles, of each alike ; mix them, then quench the Steel red-hot
■therein, four of five times together, and it will become very foft.

Thomas STEVENSON, was bred up under Aggas, and be-
came a good painter, not only in landfcape, but alfo in figures,
and architecture in diftemper. He was efpecially eminent for
fcene-painting, though his works are not fo much in efteem at
this day, as when he lived.

ASTOLZIUS. He engraved in the Gothic tafte, and
ufed this mark.

"John STONE, was an extraordinary copier in the reigns of
Charles I. and If. He was bred under Crofs, and, having the
foundation of an exquifite draughtfman, performed feveral admi-
rable copies, after many good copies in England. He did a great
.number of them, and they are reckoned amongfr. the fineft of any
Englifh copier. He did alio fome imitations after fuch matters,
as he more particularly fancied ; which performances of his are
full in great repute, and received into the belt collections amongft
us. He fpent thirty-feven years abroad in the ftudy of his art,
where he improved himfelf in feveral languages-, being befides a
man of forne learning. He died in London the 24th of Augull
1653, and lies buried in St. Martin's.

STONES, are hard, folid, mineral bodies, neither fufible
nor malleable, formed in the fucceffion or time in the bowels or
body of the earth.

Peter STOOP, was a Dutch battle-painter, who came into
England from Portugal with the late queen-dowager; his chief
fludy was battles, huntings, and havens, which he performed for
fome time with good fuccefs ; but after the arrival of John Wyke
in England, who painted the fame way, his pictures were not
fo much valued, by reafon of the greater excellency of that maf-
*er. This Stoop etched feveral prints of horfes, as alfo the queen-
dowager's public entry. He died about fcventy vears ago.