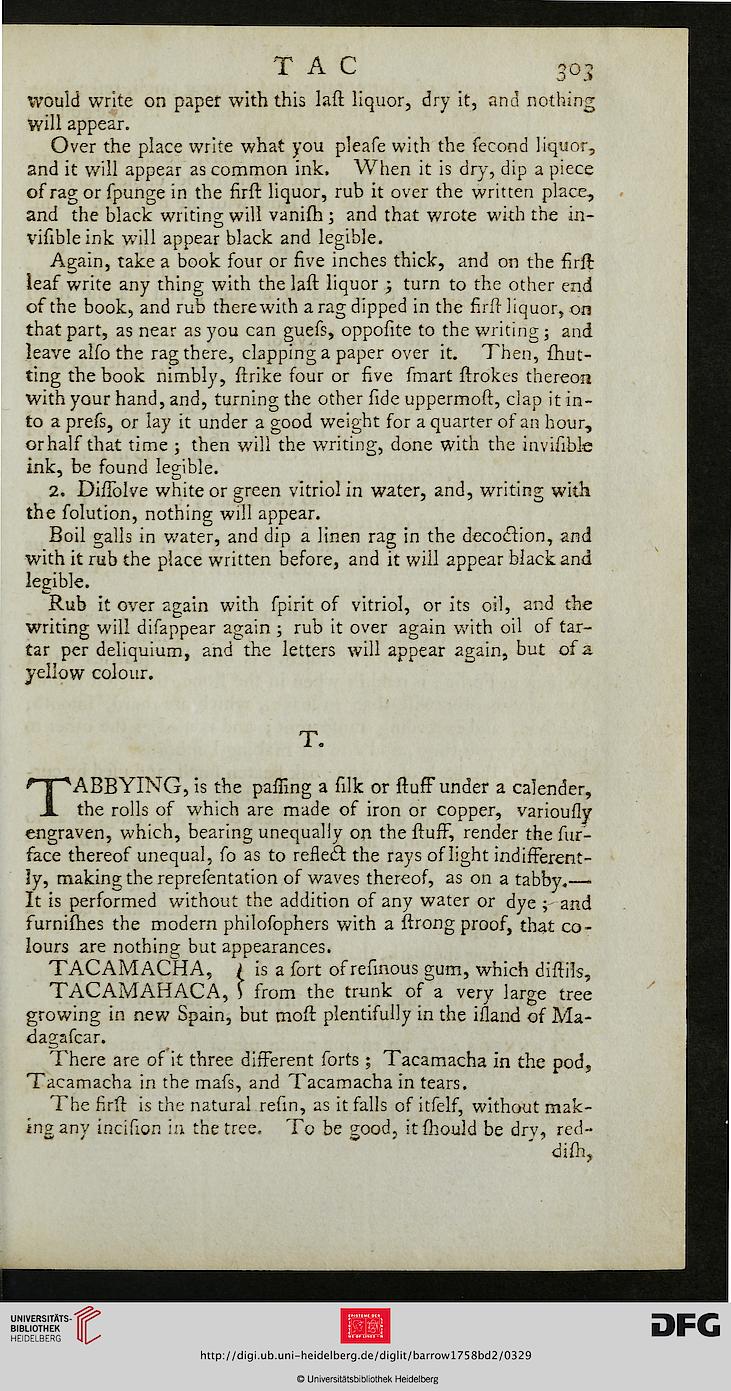 would write on paper with this lafl liquor, dry it, ana nothing
will appear.

Over the place write what you pleafe with the fecond liquor,
and it will appear as common ink. When it is dry, dip a piece
of rag or fpunge in the firft liquor, rub it over the written place,
and the black writing will vanifh ; and that wrote with the in-
vifible ink will appear black and legible.

Again, take a book four or five inches thick, and on the firft
leaf write any thing with the laft liquor ; turn to the other end
of the book, and rub therewith a rag dipped in the firfl liquor, on
that part, as near as you can guefs, oppofite to the writing ; and
leave alfo the rag there, clapping a paper over it. Then, {hut-
ting the book nimbly, ftrike four or five fmart ftrokes thereon
with your hand, and, turning the other fide uppermoft, clap it in-
to a prefs, or lay it under a good weight for a quarter of an hour,
or half that time ; then will the writing, done with the invifible
ink, be found legible.

2. DhTolve white or green vitriol in water, and, writing with
the folution, nothing will appear.

Boil galls in water, and dip a linen rag in the decoction, and
with it rub the place written before, and it will appear black and
legible.

TABBYING, is the palling a filk or ftuff under a calender,
the rolls of which are made of iron or copper, varioufly
engraven, which, bearing unequally on the ftuff, render the fur-
face thereof unequal, fo as to reflect the rays of light indifferent-
ly, making the reprefentation of waves thereof, as on a tabby.—
It is performed without the addition of any water or dye ; and
furnifhes the modern philofophers with a ftrong proof, that co-
lours are nothing but appearances.

TACAMACHA, I is a fort ofrefinous gum, which diftils,
TACAMAHACA, ) from the trunk of a very large tree
growing in new Spain, but moff. plentifully in the ifland of Ma-
dagafcar.

The hrft is the natural refm, as it falls of itfelf, without mak-
ing any incifion in the tree. To be good, itfhould be drv, red-