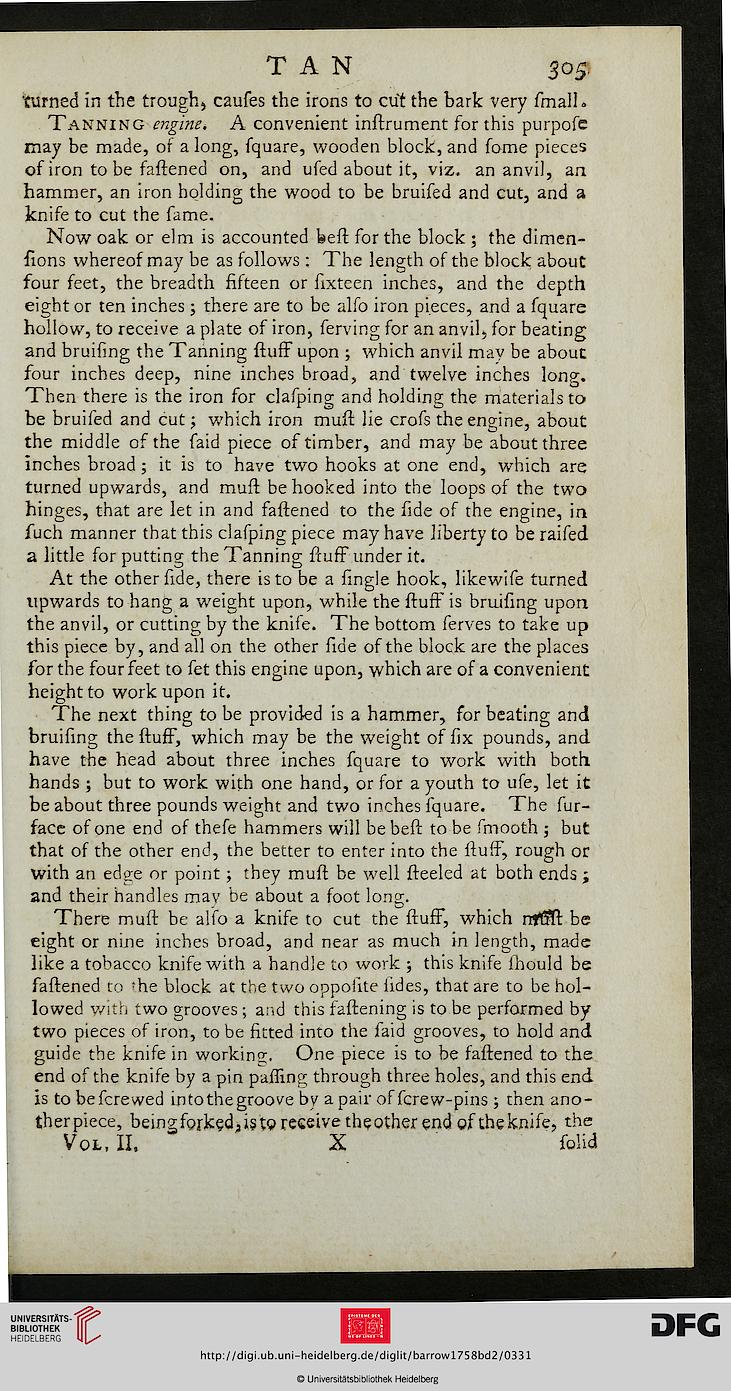 'turned in the trough, caufes the irons to cut the bark very fmalh
Tanning engine. A convenient inftrument for this purpofe
may be made, of a long, fquare, wooden block, and fome pieces
of iron to be faftened on, and ufed about it, viz. an anvil, an
hammer, an iron holding the wood to be bruifed and cut, and a
knife to cut the fame.

Now oak or elm is accounted bed: for the block ; the dimen-
fions whereof may be as follows: The length of the block about
four feet, the breadth fifteen or fixteen inches, and the depth
eight or ten inches; there are to be alfo iron pieces, and a fquare
hollow, to receive a plate of iron, ferving for an anvil, for beating
and bruifing the Tanning ftufF upon ; which anvil may be about
four inches deep, nine inches broad, and twelve inches long.
Then there is the iron for clafping and holding the materials to
be bruifed and cut; which iron muff lie crofs the engine, about
the middle of the faid piece of timber, and may be about three
inches broad ; it is to have two hooks at one end, which are
turned upwards, and muff be hooked into the loops of the two
hinges, that are let in and faftened to the fide of the engine, in
fuch manner that this clafping piece may have liberty to be raifed
a little for putting the Tanning ftufF under it.

At the other fide, there is to be a fingle hook, likewife turned
upwards to hang a weight upon, while the ftuff is bruifing upon
the anvil, or cutting by the knife. The bottom ferves to take up
this piece by, and all on the other fide of the block are the places
for the four feet to fet this engine upon, which are of a convenient
height to work upon it.

The next thing to be provided is a hammer, for beating and
bruifing the ftuff, which may be the weight of fix pounds, and
have the head about three inches fquare to work with both
hands ; but to work with one hand, or for a youth to ufe, let it
be about three pounds weight and two inches fquare. The fur-
face of one end of thefe hammers will be beft to be fmooth ; but
that of the other end, the better to enter into the ftuff, rough or
with an edge or point; they muft be well fteeled at both ends ;
and their handles mav be about a foot long.

There muft be alfo a knife to cut the fluff, which rrftSft be
eight or nine inches broad, and near as much in length, made
like a tobacco knife with a handle to work ; this knife fhould be
faftened to -he block at the two oppolite iides, that are to be hol-
lowed with two grooves ; and this faftening is to be performed by
two pieces of iron, to be fitted into the faid grooves, to hold and
guide the knife in working. One piece is to be faftened to the
end of the knife by a pin puffing through three holes, and this end
is to befcrevved intothegroove by a pair of fcrew-pins ; then ano-
therpiece, beingforkedj is to receive theother end oftheknife, the
Vol, II. X folid