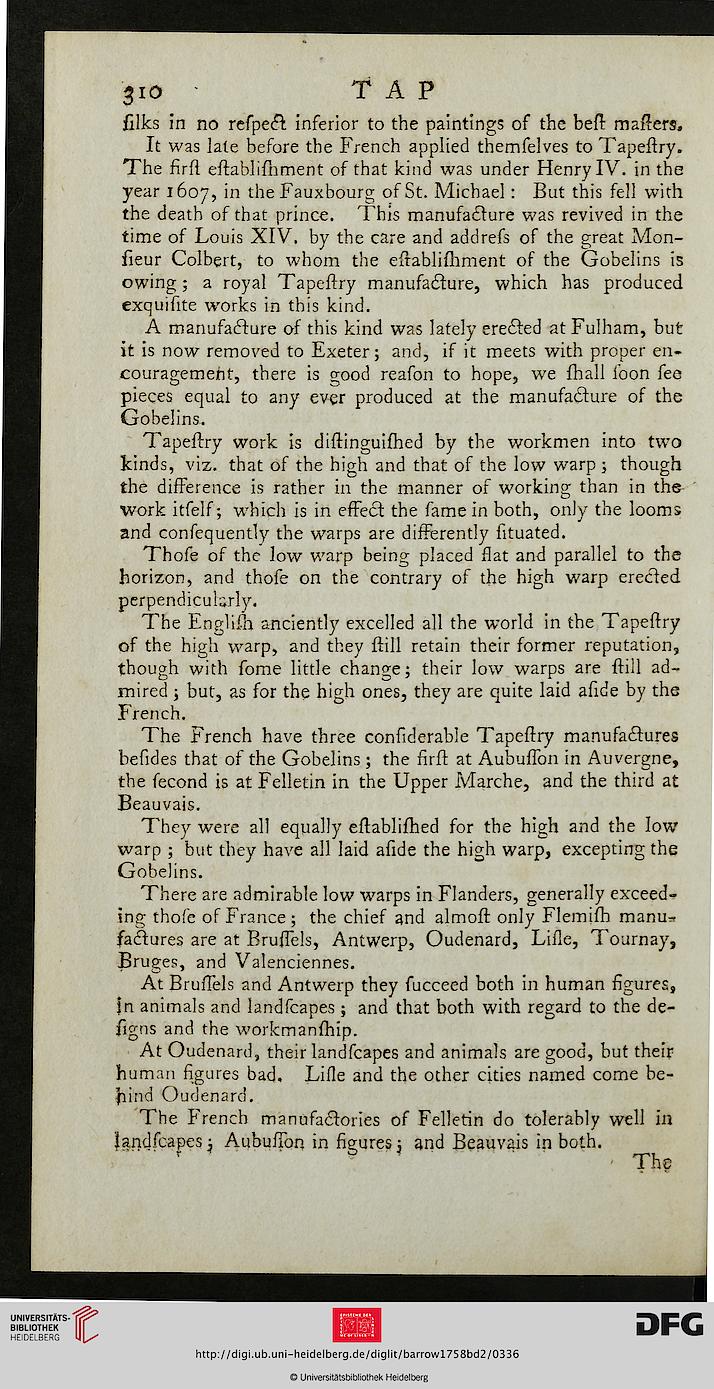 filks in no refpect inferior to the paintings of the beft matters.

It was late before the French applied themfelves to Tapeftry.
The firft eftablifnment of that kind was under Henry IV. in the
year 1607, in the Fauxbourg of St. Michael: But this fell with
the death of that prince. This manufacture was revived in the
time of Louis XIV. by the care and addrefs of the great Mon-
fieur Colbert, to whom the eftablifhment of the Gobelins is
owing; a royal Tapeftry manufacture, which has produced
exquifite works in this kind.

A manufacture of this kind was lately erected atFulham, but
it is now removed to Exeter; and, if it meets with proper en-
couragement, there is good reafon to hope, we fhall loon fee
pieces equal to any ever produced at the manufacture of the
Gobelins.

Tapeftry work is diflinguifhed by the workmen into two
kinds, viz. that of the high and that of the low warp ; though
the difference is rather in the manner of working than in th&
work itfelf; which is in effect the fame in both, only the looms
and confequently the warps are differently fituated.

Thofe of the low warp being placed flat and parallel to the
horizon, and thofe on the contrary of the high warp erected
perpendicubrly.

The Englifn anciently excelled all the world in the Tapeftry
of the high warp, and they ftill retain their former reputation,
though with fome little change; their low warps are ftill ad-
mired ; but, as for the high ones, they are quite laid afide by the
French.

The French have three confiderable Tapeftry manufactures
befides that of the Gobelins; the fir ft at Aubuflbn in Auvergne,
the fecond is at Felletin in the Upper Marche, and the third at
Beauvais.

They were all equally eftablifhed for the high and the low
warp ; but they have all laid afide the high warp, excepting the
Gobelins.

There are admirable low warps in Flanders, generally exceed-
ing thofe of France ; the chief and almoft only Flemifh manu*
factures are at Rruflels, Antwerp, Oudenard, Lifle, Tournay,
Bruges, and Valenciennes.

At Bruffels and Antwerp they fucceed both in human figures,
jn animals and landfcapes ; and that both with regard to the de-
signs and the workmanfhip.

At Oudenard, their landfcapes and animals are good, but their
human figures bad. Lifle and the other cities named come be-
hind Oudenard.

The French manufactories of Felletin do tolerably well in
landfcapes, Aubuffon in figures; and Beauvais in both.