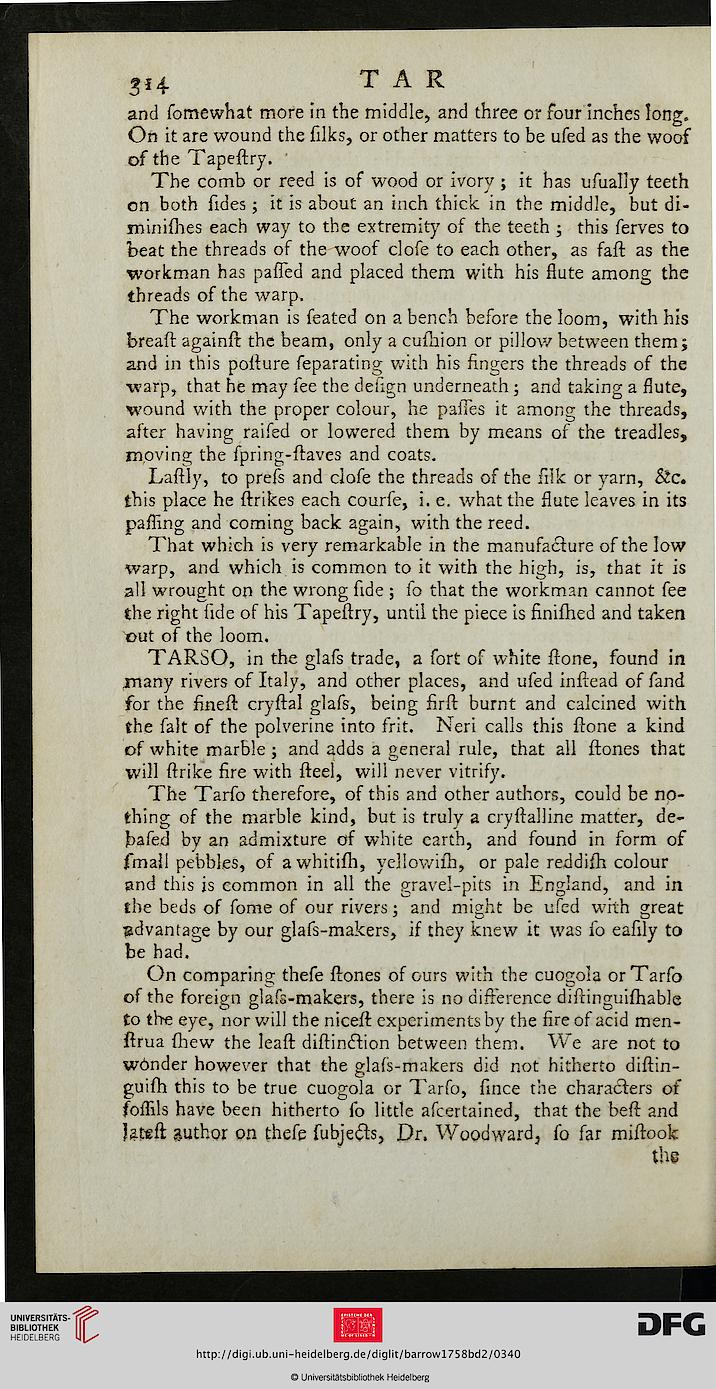 and fomewhat more in the middle, and three or four inches long.
On it are wound the filks, or other matters to be ufed as the woof
of the Tapeftry.

The comb or reed is of wood or ivory ; it has ufually teeth
on both fides; it is about an inch thick in the middle, but di-
minimes each way to the extremity of the teeth ; this ferves to
beat the threads of the woof clofe to each other, as faft as the
workman has pafted and placed them with his flute among the
threads of the warp.

The workman is feated on a bench before the loom, with his
bread againft the beam, only a cuihion or pillow between them;
and in this pofture feparating with his fingers the threads of the
warp, that he may fee the defign underneath; and taking a flute,
wound with the proper colour, he paiTes it among the threads,
after having raifed or lowered them by means of the treadles,
moving the fpring-ftaves and coats.

Laftly, to prefs and ciofe the threads of the fiik or yarn, &c.
this place he (hikes each courfe, i. e. what the flute leaves in its
pafling and coming back again, with the reed.

That which is very remarkable in the manufacture of the low
warp, and which is common to it with the high, is, that it is
all wrought on the wrong fide ; fo that the workman cannot fee
the right fide of his Tapeftry, until the piece is finifhed and taken
out of the loom.

TARSO, in the glafs trade, a fort of white (tone, found in
many rivers of Italy, and other places, and ufed inftead of fand
for the fineft cryftal glafs, being firft burnt and calcined with
the fait of the polverine into frit. Neri calls this Irone a kind
of white marble ; and adds a general rule, that all (tones that
will ftrike fire with fteel, will never vitrify.

The Tarfo therefore, of this and other authors, could be no-
thing of the marble kind, but is truly a cryfralline matter, de-
bafed by an admixture of white earth, and found in form of
fmall pebbles, of awhitifh, yeliov/iih, or pale reddilh colour
and this is common in all the gravel-pits in England, and in
the beds of fome of our rivers; and might be ufed with great
advantage by our glafs-makers, if they knew it was ib eafily to
be had.

On comparing thefe (tones of ours with the cuogola or Tarfo
of the foreign glafs-makers, there is no difference diftinguifhable
to the eye, nor will the niceft experiments by the fire of acid men-
firua (hew the leaft diflinclion between them. We are not to
wOnder however that the glals-makers did not hitherto diftin-
guifh this to be true cuogola or Tarfo, fince the characters of
foifils have been hitherto fo little afcertained, that the bed: and
lateft author on thefe fubje&s, Dr. Woodward, fo far miftook