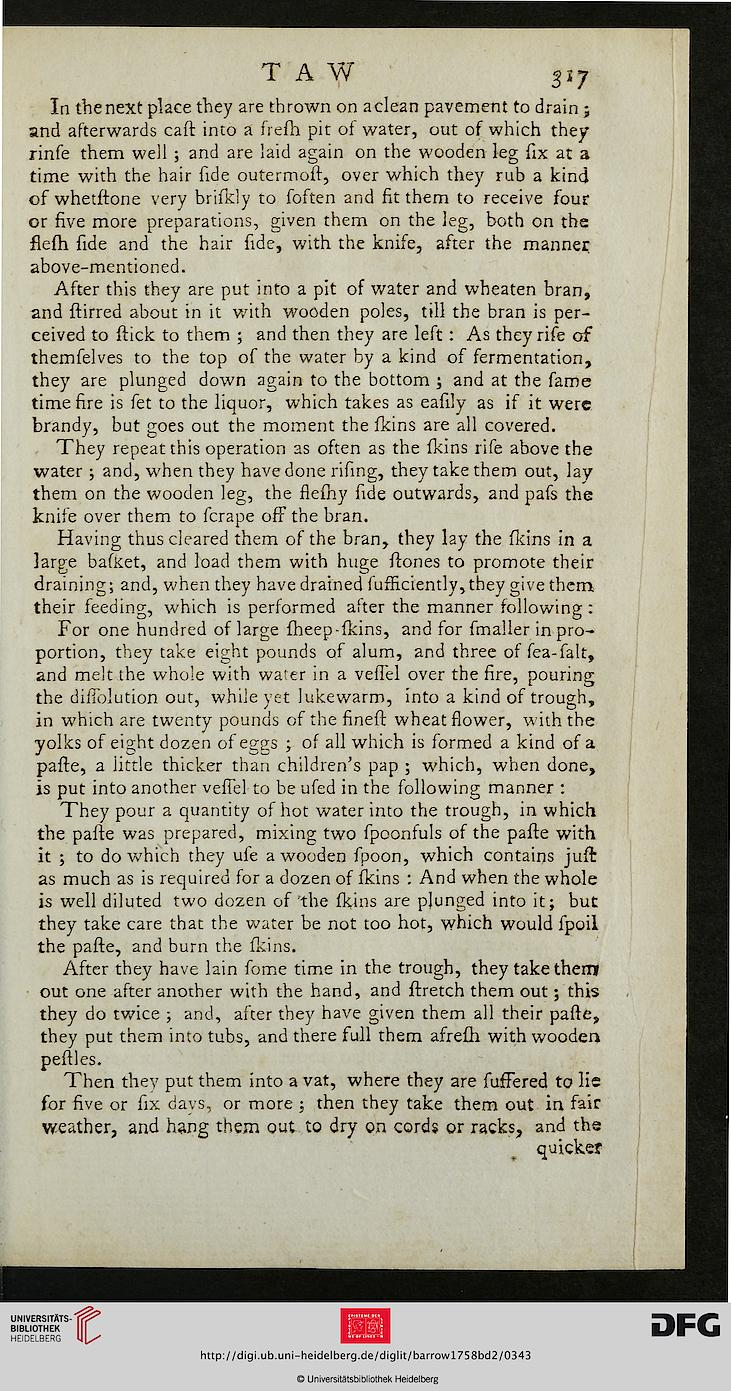 In the next place they are thrown on aclean pavement to drain ;
and afterwards caft into a frefh pit of water, out of which they
rinfe them well ; and are laid again on the wooden leg fix at a
time with the hair fide outermoft, over which they rub a kind
of whetftone very brifkly to foften and fit them to receive four
or five more preparations, given them on the leg, both on the
flefh fide and the hair fide, with the knife, after the manner
above-mentioned.

After this they are put into a pit of water and wheaten bran,
and ftirred about in it with wooden poles, till the bran is per-
ceived to ftick to them ; and then they are left: As they rife of
themfelves to the top of the water by a kind of fermentation,
they are plunged down again to the bottom ; and at the fame
time fire is fet to the liquor, which takes as eafily as if it were
brandy, but goes out the moment the fkins are all covered.

They repeat this operation as often as the fkins rife above the
water ; and, when they have done rifing, they take them out, lay
them on the wooden leg, the flefhy fide outwards, and pafs the
knife over them to fcrape off the bran.

Having thus cleared them of the bran, they lay the fkins in a
large baiKet, and load them with huge ftones to promote their
draining; and, when they have drained fufficiently, they give them
their feeding, which is performed after the manner following :
For one hundred of large fheep-fkins, and for fmaller in pro-
portion, they take eight pounds of alum, and three of fea-fa!t,
and melt the whole with water in a vefTel over the fire, pouring
the diftblution out, while yet lukewarm, into a kind of trough,
in which are twenty pounds of the fineft wheat flower, with the
yolks of eig;ht dozen of eggs ; of all which is formed a kind of a
pafte, a little thicker than children's pap ; which, when done,
is put into another vefTel to be ufed in the following manner :

They pour a quantity of hot water into the trough, in which
the pafte was prepared, mixing two fpoonfuls of the pafte with
it ; to do which they ufe a wooden fpoon, which contains juft
as much as is required for a dozen of fkins : And when the whole
is well diluted two dozen of the fkins are pjunged into it; but
they take care that the water be not too hot, which would fpoil
the pafte, and burn the fkins.

After they have lain fome time in the trough, they take them
out one after another with the hand, and ftretch them out; this
they do twice ; and, after they have given them all their pafte,
they put them into tubs, and there full them afrefh with wooden
peftles.

Then they put them into a vat, where they are fuffered to lie
for five or fix days, or more ; then they take them out in fair
weather, and hang them out to dry on cords or racks, and the