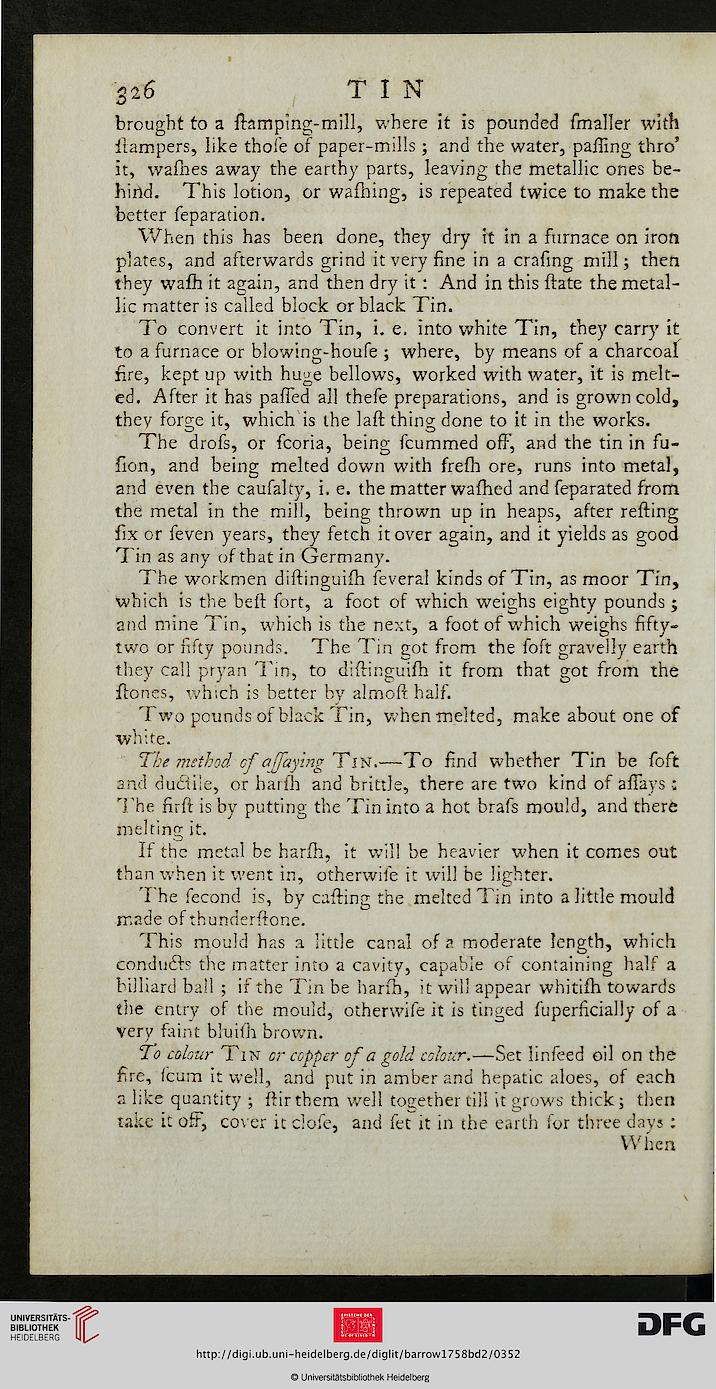 brought to a ftnmping-mill, where it is pounded fmaller with
Hampers, like thole of paper-mil's; and the water, palling thro'
it, wafhes away the earthy parts, leaving the metallic ones be-
hind. This lotion, or warning, is repeated twice to make the
better feparation.

When this has been done, they dry it in a furnace on iron
plates, and afterwards grind it very fine in a crafing mill; then
they wafh it again, and then dry it : And in this (rate the metal-
lic matter is called block or black Tin.

To convert it into Tin, i. e. into white Tin, they carry it
to a furnace or blowing-houfe ; where, by means of a charcoal
fire, kept up with huge bellows, worked with water, it is melt-
ed. After it has paffed all thefe preparations, and is grown cold,
they forge it, which is the la ft thing done to it in the works.

The drofs, or fcoria, being fcummed off, and the tin in fu-
fion, and being melted down with frefh ore, runs into metal,
and even the caufalty, i. e. the matter warned and feparated from
the metal in the mill, being thrown up in heaps, after refting
fix or feven years, they fetch it over again, and it yields as good
Tin as any of that in Germany.

Two pounds of black Tin, when melted, make about one of
white.

The method of a (faying Tin.—To find whether Tin be foft
and duciile, or hailh and brittle, there are two kind of allays :
The firft is by putting the Tin into a hot brafs mould, and there
melting it.

If the metal be harfh, it will be heavier when it comes out
than when it went in, otherwife it will be lighter.

The fecond is, by calling the melted Tin into a little mould
made of thunderftcne.

This mould has a little canal of? moderate length, which
conduc~b the matter into a cavity, capable of containing half a
billiard ball ; if the Tin be harfh, it will appear whitifh towards
the entry of the mould, otherwife it is tinged fuperfkially of a
very faint bluifh brown.

To colour Tin or copper of a gold colour,—Set linfeed oil on the
f re, fcum it well, and put in amber and hepatic aloes, of each
a like quantity ; ftir them well together till it grows thick; then
take it off, cover it clofe, and fet it in the earth for three days :