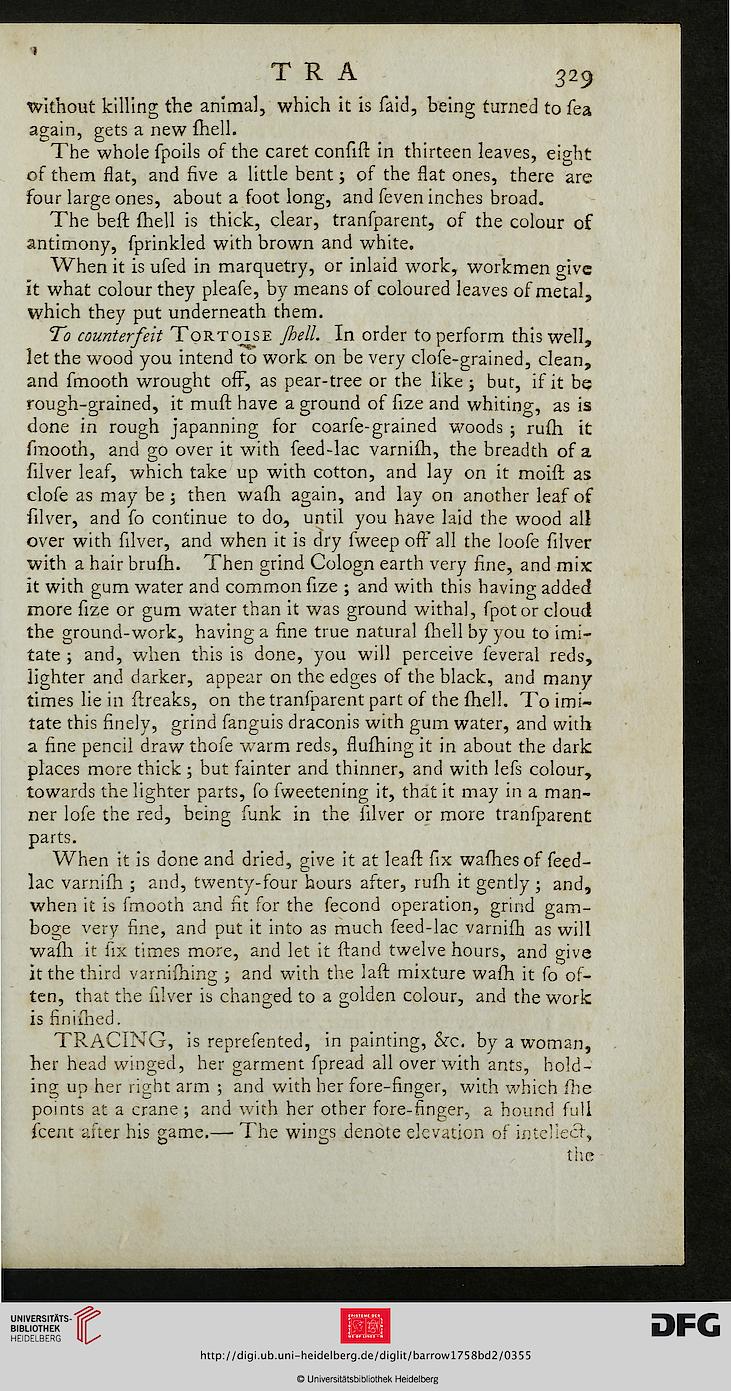 without killing the animal, which it is faid, being turned tofea
again, gets a new {hell.

The whole fpoils of the caret confift in thirteen leaves, eight
of them flat, and five a little bent j of the flat ones, there are
four large ones, about a foot long, and feven inches broad.

The beft fhell is thick, clear, tranfparent, of the colour of
antimony, fprinkled with brown and white.

When it is ufed in marquetry, or inlaid work, workmen give
it what colour they pleafe, by means of coloured leaves of metal,
which they put underneath them.

To counterfeit Tortoise /hell. In order to perform this well,
let the wood you intend to work on be very clofe-grained, clean,
and fmooth wrought off, as pear-tree or the like ; but, if it be
rough-grained, it muff have a ground of fize and whiting, as is
done in rough japanning for coarfe-grained woods ; rufh it
fmooth, and go over it with feed-lac varnifh, the breadth of a
filver leaf, which take up with cotton, and lay on it moiff. as
clofe as may be; then wafh again, and lay on another leaf of
filver, and fo continue to do, until you have laid the wood all
over with filver, and when it is dry fweep off all the loofe filver
with a hair brum. Then grind Cologn earth very fine, and mix
it with gum water and common fize ; and with this having added
more fize or gum water than it was ground withal, fpotor cloud
the ground-work, having a fine true natural fhell by you to imi-
tate ; and, when this is done, you will perceive feveral reds,
lighter and darker, appear on the edges of the black, and many
times lie in flreaks, on the tranfparent part of the fhell. To imi-
tate this finely, grind fanguis draconis with gum water, and with
a fine pencil draw thofe warm reds, flufhing it in about the dark
places more thick; but fainter and thinner, and with lefs colour,
towards the lighter parts, fo fweetening it, that it may in a man-
ner lofe the red, being funk in the filver or more tranfparent
parts.

When it is done and dried, give it at leafl fix wafhesof feed-
lac varnifh ; and, twenty-four hours after, rufh it gently ; and,
when it is fmooth and fit for the fecond operation, grind gam-
boge very fine, and put it into as much feed-lac varnifh as will
wafh it fix times more, and let it ftand twelve hours, and give
it the third varnifhing ; and with the laft mixture wafh it fo of-
ten, that the filver is changed to a golden colour, and the work
is finifhed.

TRACING, is reprefented, in painting, &c. by a woman,
her head winged, her garment fpread all over with ants, hold-
ing up her right arm ; and with her fore-finger, with which fhe
points at a crane; and with her other fore-finger, a hound full
(cent after his game.— The wings denote elevation of intellect,