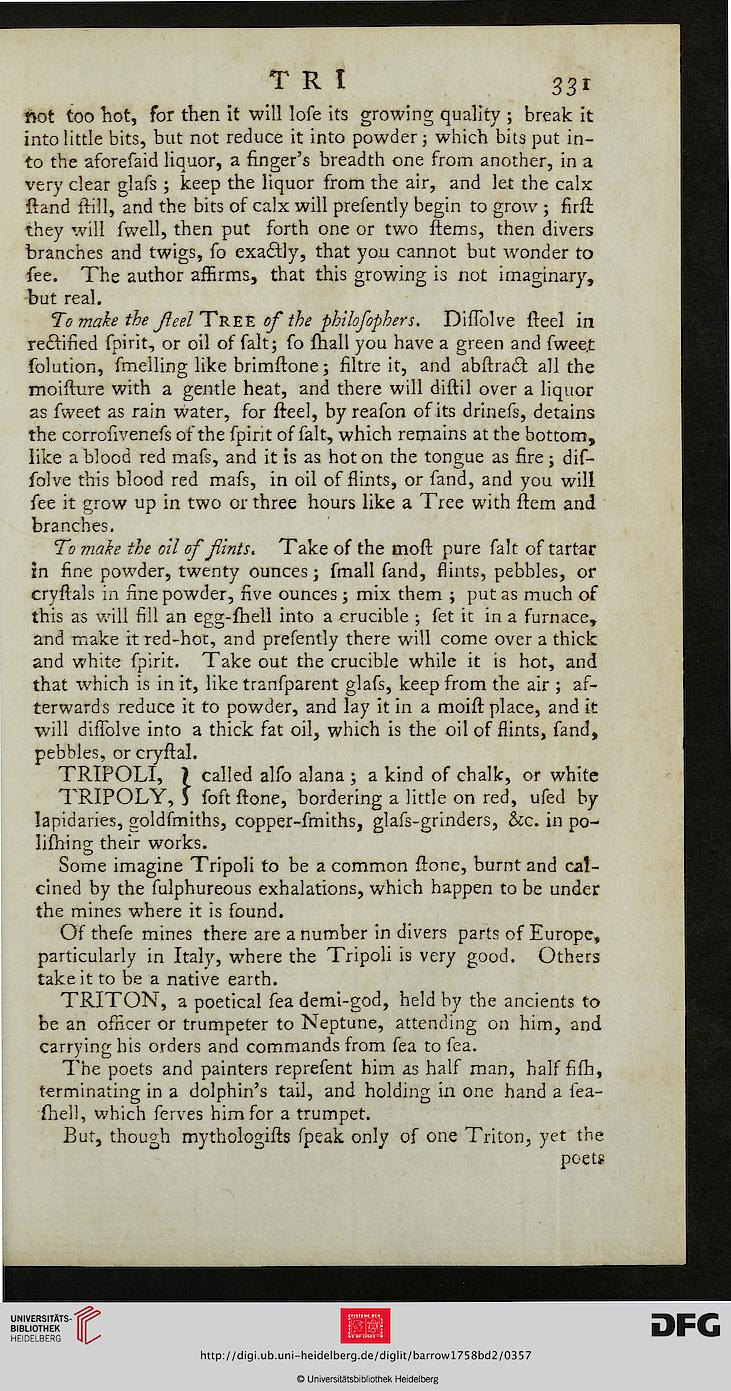 not too hot, for then it will lofe its growing quality ; break it
into little bits, but not reduce it into powder; which bits put in-
to the aforefaid liquor, a finger's breadth one from another, in a
very clear glafs ; keep the liquor from the air, and let the calx
ftand ftnl, and the bits of calx will prefently begin to grow ; firft
they will fwell, then put forth one or two ftems, then divers
branches and twigs, fo exactly, that you cannot but wonder to
fee. The author affirms, that this growing is not imaginary,
but real.

To make the J?eel Tree of the phtlofophers. Diflblve {feel in
reclined fpirit, or oil of fait; fo {hall you have a green and fwee.t
folution, fmelling like brimftone; filtre it, and abftra£l all the
rnoifture with a gentle heat, and there will diftil over a liquor
as fweet as rain water, for fteel, by reafon of its drinefs, detains
the corrcfivenefs of the fpirit of fait, which remains at the bottom,
like a blood red mafs, and it is as hot on the tongue as fire; dif-
foive this blood red mafs, in oil of flints, or fand, and you will
fee it grow up in two or three hours like a Tree with item and
branches.

To make the oil of flints. Take of the mod: pure fait of tartar
in fine powder, twenty ounces; fmall fand, flints, pebbles, or
cryflals in fine powder, five ounces; mix them ; put as much of
this as will fill an egg-fhell into a crucible ; fet it in a furnace,
and make it red-hoc, and prefently there will come over a thick
and white fpirit. Take out the crucible while it is hot, and
that which is in it, like tranfparent glafs, keep from the air ; af-
terwards reduce it to powder, and lay it in a moift place, and it
will diflblve into a thick fat oil, which is the oil of flints, fand,
pebbles, or cryftal.

TRIPOLI, 7 called alfo alana ; a kind of chalk, or white

Some imagine Tripoli to be a common ftone, burnt and cal-
cined by the fulphureous exhalations, which happen to be under
the mines where it is found.

Of thefe mines there are a number in divers parts of Europe,
particularly in Italy, where the Tripoli is very good. Others
take it to be a native earth.

TRITON, a poetical fea demi-god, held by the ancients to
be an officer or trumpeter to Neptune, attending on him, and
carrying his orders and commands from fea to fea.

The poets and painters reprefent him as half man, half fifh,
terminating in a dolphin's tail, and holding in one hand a fea-
Ihell, which ferves him for a trumpet.

But, though mythologies fpeak only of one Triton, yet the