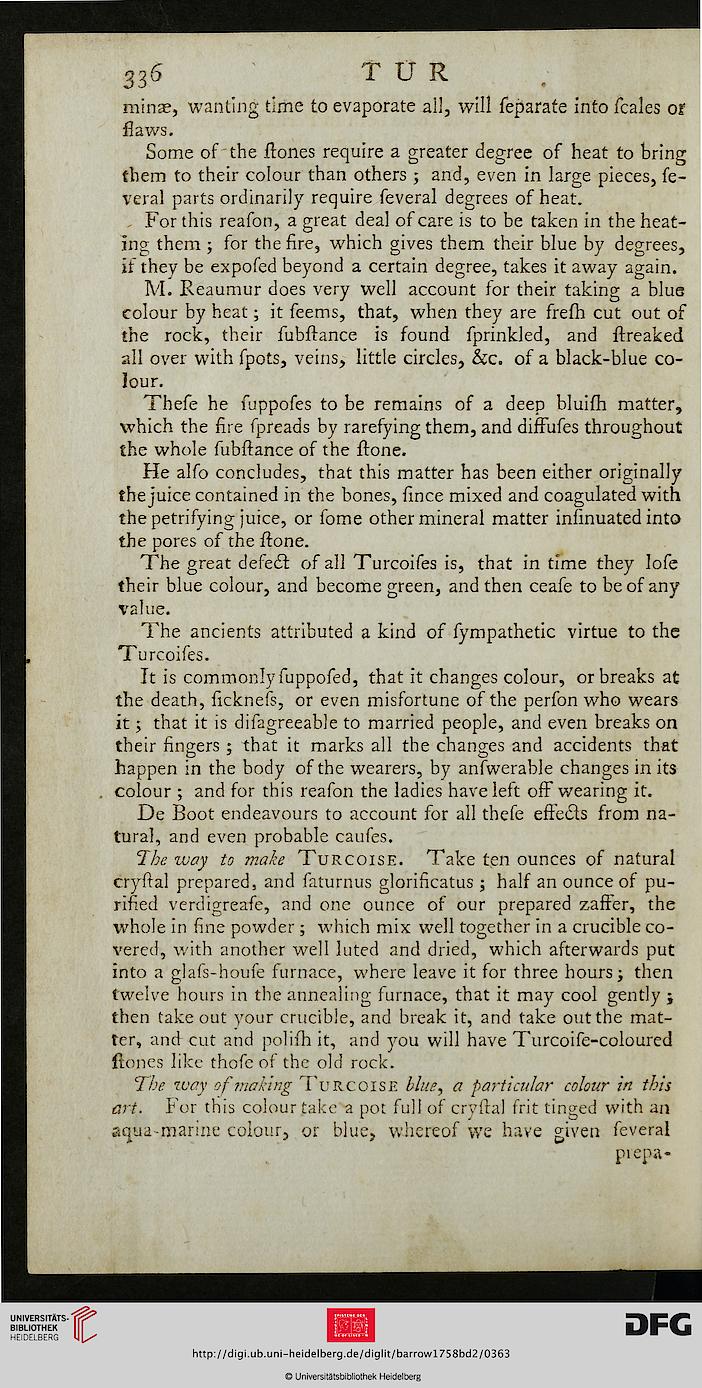 minae, wanting time to evaporate all, will feparate into (bales of
flaws.

Some of the ftones require a greater degree of heat to bring
tbem to their colour than others ; and, even in large pieces, fe-
veral parts ordinarily require feveral degrees of heat.

For this reafon, a great deal of care is to be taken in the heat-
ing them ; for the fire, which gives them their blue by degrees,
if they be expofed beyond a certain degree, takes it away again.

M. Reaumur does very well account for their taking a blues
colour by heat; it feems, that, when they are frefh cut out of
the rock, their iubftance is found fprinkled, and ftreaked
all over with fpots, veins, little circles, &c. of a black-blue co-
lour.

He alfo concludes, that this matter has been either originally
the juice contained in the bones, fince mixed and coagulated with
the petrifying juice, or fome other mineral matter infinuated into
the pores of the ftone.

The great defect of all Turcoifes is, that in time they lofe
their blue colour, and become green, and then ceafe to be of any
value.

The ancients attributed a kind of fympathetic virtue to the
Turcoifes.

It is commonly fuppofed, that it changes colour, or breaks at
the death, ficknefs, or even misfortune of the perfon who wears
it; that it is difagreeable to married people, and even breaks on
their fingers : that it marks all the changes and accidents that
happen in the body of the wearers, by anfwerable changes in its
colour ; and for this reafon the ladies have left off wearing it.

De Boot endeavours to account for all thefe eftedis from na-
tural, and even probable caufes.

The way to make Turcoise. Take ten ounces of natural
cryftal prepared, and faturnus glorificatus ; half an ounce of pu-
rified verdigreafe, and one ounce of our prepared zaffer, the
whole in fine powder ; which mix well together in a crucible co-
vered, with another well luted and dried, which afterwards put
into a glafs-houfe furnace, where leave it for three hours; then
twelve hours in the annealing furnace, that it may cool gently ;
then take out your crucible, and break it, and take out the mat-
ter, and cut and polifh it, and you will have Turcoife-coloured
flones like thofc of the old rock.

The Way of making Turcoise blue, a particular colour in this
art. For this colour take a pot full of cryiral frit tinged with an
aqua marine colour, or blue, whereof we have given feveral