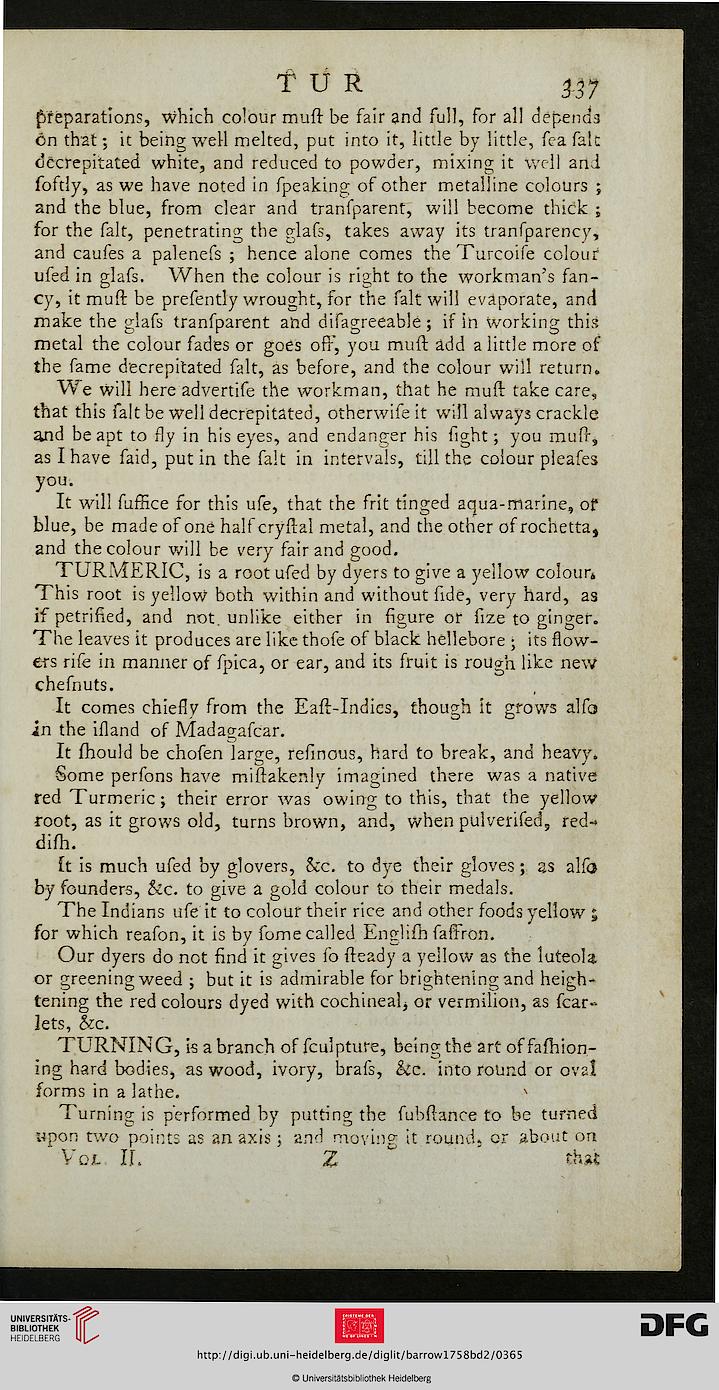 preparations, which colour muft be fair and full, for all depends
on that; it being well melted, put into it, little by little, Tea fait
o'ecrepitated white, and reduced to powder, mixing it Well and
foftly, as we have noted in fpeaking of other metalline colours ;
and the blue, from clear and tranfparent, will become thick ;
for the fait, penetrating the glafs, takes away its tranfparency,
and caufes a palenefs ; hence alone comes the Turcoife colour
ufed in glafs. When the colour is right to the workman's fan-
cy, it muft be prefently wrought, for the fait will evaporate, and
make the glafs tranfparent and difagreeable ; if in Working this
metal the colour fades or goes oft", you muft add a little more of
the fame decrepitated fait, as before, and the colour will return.

We Will here advertife the workman, that he muft take care,
that this fait be well decrepitated, otherwife it will always crackle
and be apt to fly in his eyes, and endanger his fight; you muff,
as I have faid, put in the fait in intervals, till the colour pleafes
you.

It will fuffice for this ufe, that the frit tinged aqua-marine, of
blue, be made of one half cryftal metal, and the other of rochetta,
and the colour will be very fair and good.

TURMERIC, is a root ufed by dyers to give a yellow co!our4
This root is yellow both within and without fide, very hard, as
if petrified, and not unlike either in figure or fize to ginger.
The leaves it produces are like thofe of black hellebore ; its flow-
ers rife in manner of fpica, or ear, and its fruit is rough like new
chefnuts.

It comes chiefly from the Eaft-Indics, though it grows alfo
in the ifland of Mada^afcar.

It fhould be chofen large, refinous, hard to break, and heavy.

Some perfons have miftakenly imagined there was a native
red Turmeric; their error was owing to this, that the yellow
root, as it grows old, turns brown, and, when pulverifed, red*
difh.

ft is much ufed by glovers, &c. to dye their gloves; as alfo
by founders, &c. to give a gold colour to their medals.

The Indians ufe it to colour their rice and other foods yellow ;
for which reafon, it is by fome called Englifh faffron.

Our dyers do not find it gives fo fteady a yellow as the luteola
or greening weed ; but it is admirable for brightening and heigh-
tening the red colours dyed with cochinealj or vermilion, as fear-
Jets, &c.

TURNING, is a branch of fculpture, being the art of fafhion-
ing hard bodies, as wood, ivory, brafs, &c. into round or oval
forms in a lathe. »

Turning is performed by putting the fubftanee to be turned
upon two points as an axis; and moving it round, or about on