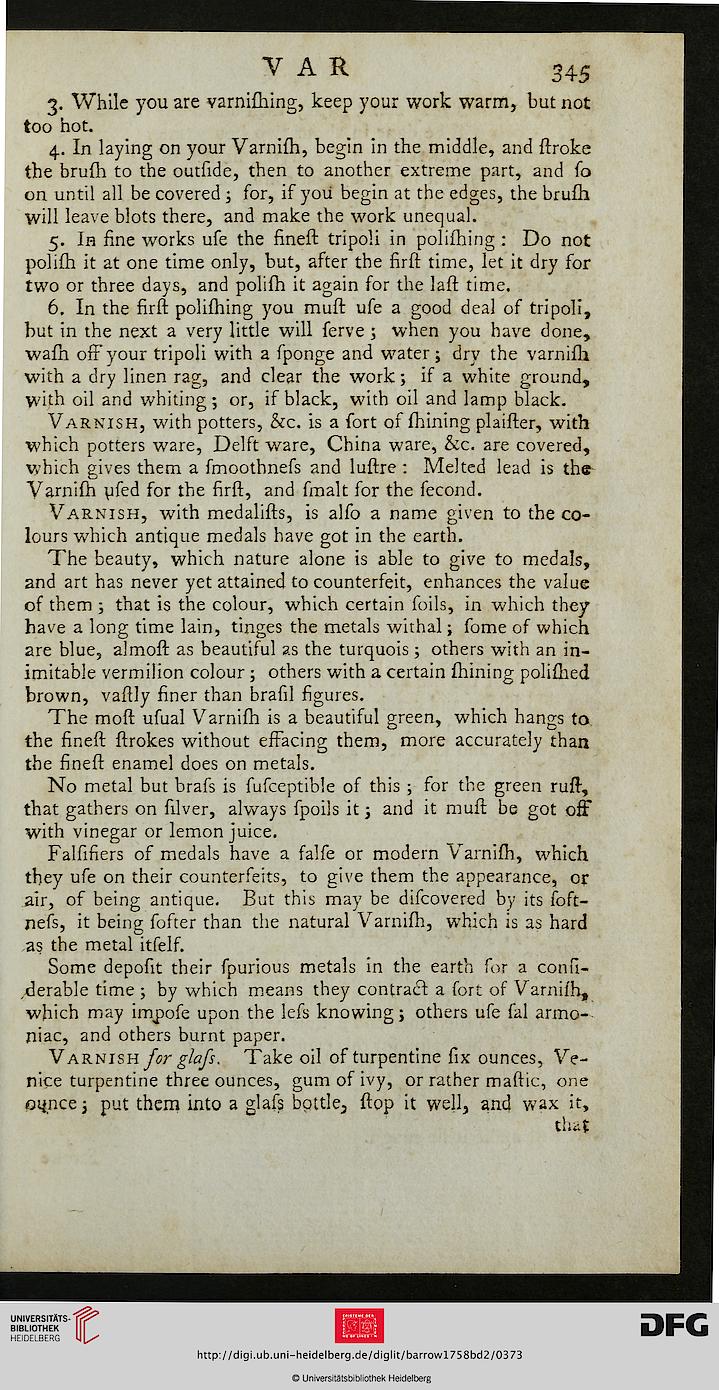 3. While you are varnifhing, keep your work warm, but not
too hot.

4. In laying on your Varnifh, begin in the middle, and ftroke
the brum to the outfide, then to another extreme part, and fo
on until all be covered ; for, if you begin at the edges, the brufh
will leave blots there, and make the work unequal.

5. In fine works ufe the fineft tripoli in polifhing : Do not
polifh it at one time only, but, after the fir ft time, let it dry for
two or three days, and polifh it again for the laft time.

6. In the firft polifhing you muft ufe a good deal of tripoli,
but in the next a very little will ferve ; when you have done,
wafh off your tripoli with a fponge and water; dry the varnifh
with a dry linen rag, and clear the work; if a white ground,
with oil and whiting; or, if black, with oil and lamp black.

Varnish, with potters, &c. is a fort of mining plaifter, with
which potters ware, Delft ware, China ware, &c. are covered,
which gives them a fmoothnefs and luff re : Melted lead is the
Varnifh yfed for the firft, and fmalt for the fecond.

Varnish, with medalifts, is alfo a name given to the co-
lours which antique medals have got in the earth.

The beauty, which nature alone is able to give to medals,
and art has never yet attained to counterfeit, enhances the value
of them ; that is the colour, which certain foils, in which they
have a long time lain, tinges the metals withal; fome of which
are blue, almoft as beautiful as the turquois; others with an in-
imitable vermilion colour ; others with a certain fhining polifhed
brown, vaftly finer than brafil figures.

The moft ufual Varnifh is a beautiful green, which hangs to
the fineft ftrokes without effacing them, more accurately than
the fineft enamel does on metals.

No metal but brafs is fufceptible of this ; for the green ruft,
that gathers on filver, always fpoils it; and it muft be got off
with vinegar or lemon juice.

Falfifiers of medals have a falfe or modern Varnifh, which
they ufe on their counterfeits, to give them the appearance, or
air, of being antique. But this may be difcovered by its foft-
nefs, it being fofter than the natural Varnifh, which is as hard
as the metal itfelf.

Some depofit their fpurious metals in the earth for a conu-
derable time ; by which means they contract a fort of Varnifh,
which may impofe upon the lefs knowing; others ufe fal armo-
niac, and others burnt paper.

Varnish for glafs. Take oil of turpentine fix ounces, Ve-
nice turpentine three ounces, gum of ivy, or rather maftic, one
oynce; put them into a glafs bottle, flop it well, and wax it,