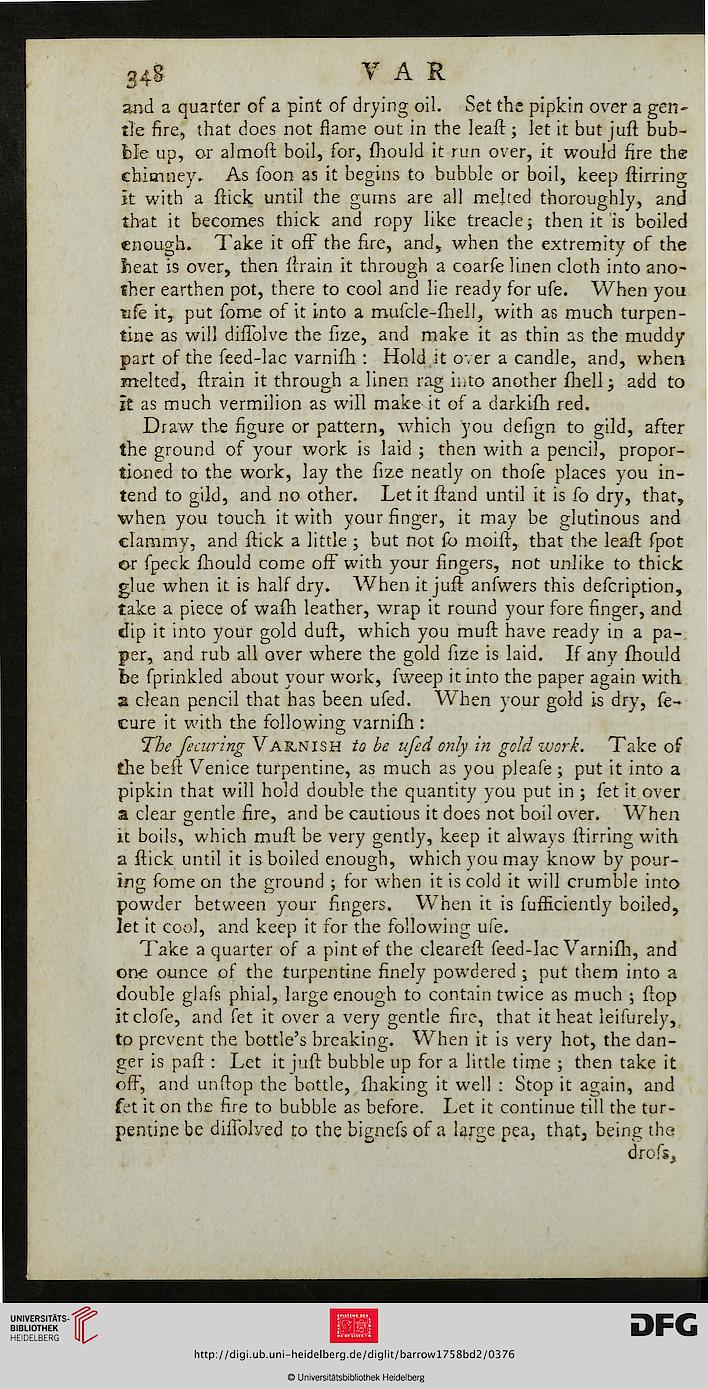 and a quarter of a pint of drying oil. Set the pipkin over a gen-
tle fire, that does not flame out in the leaf! ; let it but juft bub-
ble up, or almoft boil, for, mould it run over, it would fire the
chimney- As foon as it begins to bubble or boil, keep ftirring
it with a flick until the gums are all melted thoroughly, and
that it becomes thick and ropy like treacle; then it is boiled
enough. Take it off the fire, and, when the extremity of the
heat is over, then flrain it through a coarfe linen cloth into ano-
ther earthen pot, there to cool and lie ready for ufe. When you
tife it, put fome of it into a mufcle-fhel), with as much turpen-
tine as will difTolve the fize, and make it as thin as the muddy
part of the feed-lac varnifh : Hold it over a candle, and, when
melted, ftrain it through a linen rag into another fhell; add to
it as much vermilion as will make it of a darkifh red.

Draw the figure or pattern, which you defign to gild, after
the ground of your work is laid ; then with a pencil, propor-
tioned to the work, lay the fize neatly on thofe places you in-
tend to gild, and no other. Let it fland until it is fo dry, that,
when you touch it with your finger, it may be glutinous and
clammy, and flick a little ; but not fo moifr, that the leail fpot
or fpeck mould come off with your fingers, not unlike to thick
glue when it is half dry. When it juft anfwers this defcription,
take a piece of wafh leather, wrap it round your fore finger, and
dip it into your gold dull, which you mull: have ready in a pa-
per, and rub all over where the gold fize is laid. If any mould
be fprinkled about your work, fiveep it into the paper again with
a clean pencil that has been ufed. When your gold is dry, fe-
cure it with the following varnifh :

The feairing Varnish to be ufed only in goldzvork. Take of
die beft Venice turpentine, as much as you pleafe ; put it into a
pipkin that will hold double the quantity you put in ; fet it over
a clear gentle fire, and be cautious it does not boil over. When
it boils, which mull be very gently, keep it always llirring with
a Hick until it is boiled enough, which you may know by pour-
ing fome on the ground ; for when it is cold it will crumble into
powder between your fingers. When it is fufficiently boiled,
let it cool, and keep it for the following ufe.

Take a quarter of a pint of the cleareft feed-lac Varnifh, and
one ounce of the turpentine finely powdered ; put them into a
double glafs phial, large enough to contain twice as much ; flop
itclofe, and fet it over a very gentle fire, that it heat leifurely,
to prevent the bottle's breaking. When it is very hot, the dan-
ger is pad : Let it juft bubble up for a little time ; then take it
off, and unftop the bottle, fhaking it well : Stop it again, and
fet it on the fire to bubble as before. Let it continue till the tur-
pentine be diffolved to the bignefs of a large pea, that, being tha