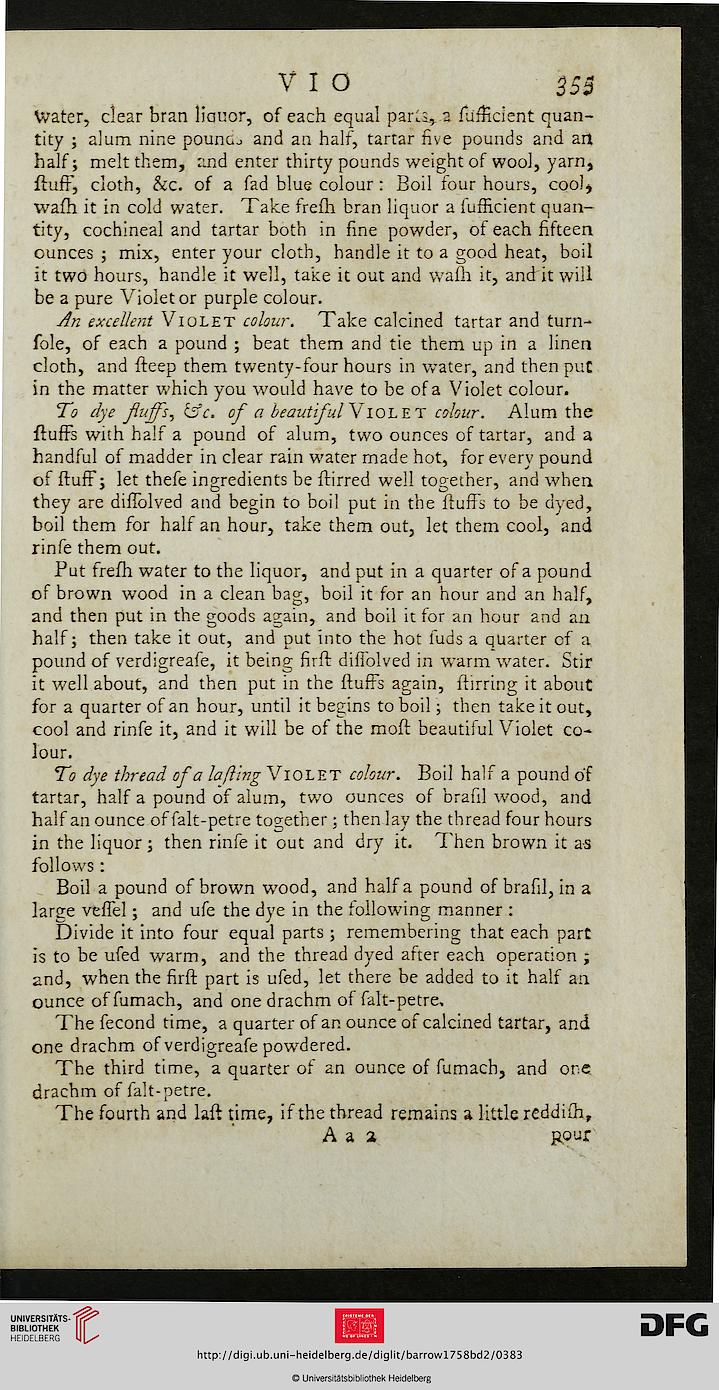 Water, clear bran liquor, of each equal parts, a Cii&dent quan-
tity ; alum nine pounc and an half, tartar five pounds and an
half j melt them, and enter thirty pounds weight of wool, yarn,
fluff, cloth, &c. of a fad blue colour : Boil four hours, cool,
wafh it in cold water. Take frefh bran liquor a fufficient quan-
tity, cochineal and tartar both in fine powder, of each fifteen
ounces ; mix, enter your cloth, handle it to a good heat, boil
it two hours, handle it well, take it out and wafh it, and it will
be a pure Violet or purple colour.

An excellent Violet colour. Take calcined tartar and turn-
fole, of each a pound ; beat them and tie them up in a linen
cloth, and fleep them twenty-four hours in water, and then put
in the matter which you would have to be of a Violet colour.

To dye fluffs, iZc. of a beautiful Violet colour. Alum the
fluffs with half a pound of alum, two ounces of tartar, and a
handful of madder in clear rain water made hot, for every pound
of fluff; let thefe ingredients be ftirred well together, and when
they are diffolved and begin to boil put in the fluffs to be dyed,
boil them for half an hour, take them out, let them cool, and
rinfe them out.

To dye thread of a lafting Violet colour. Boil half a pound of
tartar, half a pound of alum, two ounces of brafil wood, and
half an ounce of falt-petre together; then lay the thread four hours
in the liquor; then rinfe it out and dry it. Then brown it as
follows:

Boil a pound of brown wood, and half a pound of brafil, in a
large veffel; and ufe the dye in the following manner :

Divide it into four equal parts ; remembering that each part
is to be ufed warm, and the thread dyed after each operation ;
2nd, when the firft part is ufed, let there be added to it half an
ounce of fumach, and one drachm of falt-petre.

The fecond time, a quarter of an ounce of calcined tartar, and
one drachm of verdigreafe powTdered.

The third time, a quarter of an ounce of fumach, and ore
drachm of falt-petre.

The fourth and laft time, if the thread remains a little rcddiih,