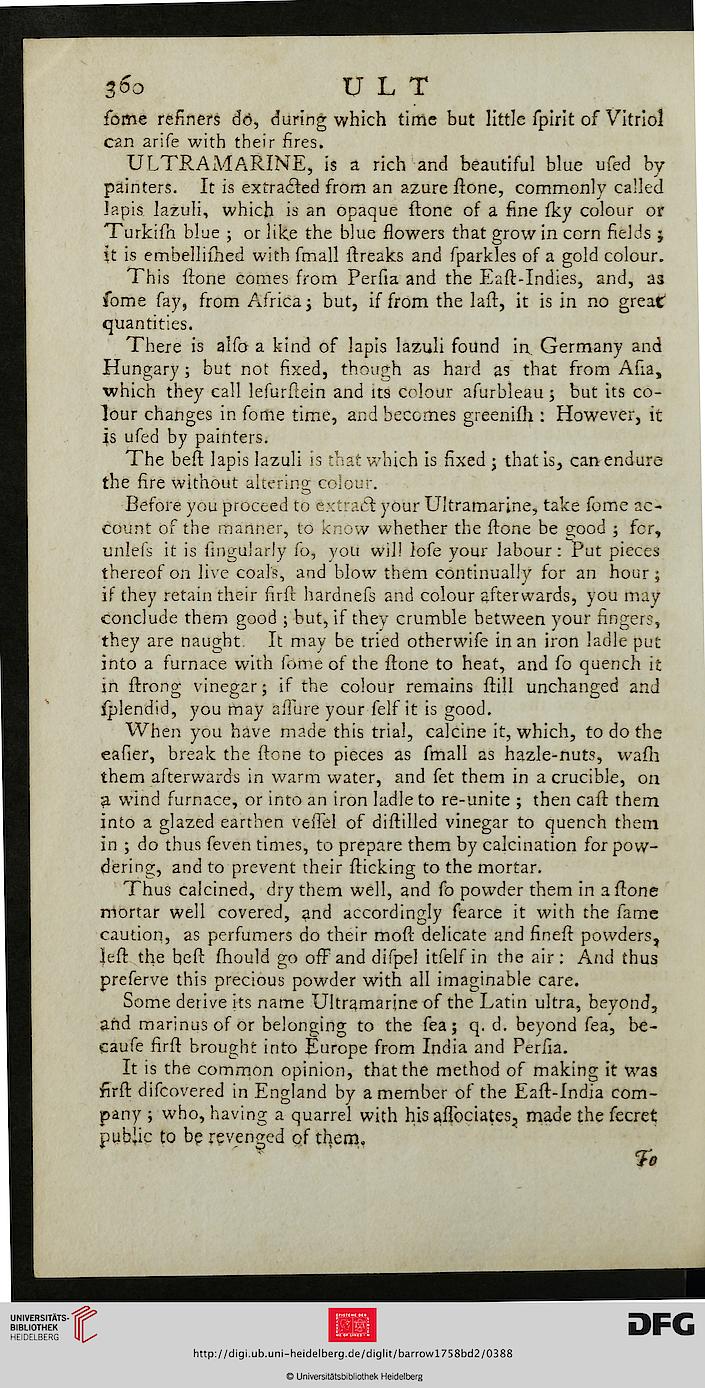 fome refiners do, during which time but little fpirit of Vitriol

can arife with their fires.

ULTRAMARINE, is a rich and beautiful blue ufed by-
painters. It is extracted from an azure ftone, commonly called
lapis lazuli, which is an opaque ftone of a fine fky colour or
Turkifn blue ; or like the blue flowers that grow in corn fields ;
h is embelliihed with fmall ftreaks and fparkles of a gold colour.

This ftone comes from Perfia and the Eaft-Indies, and, as
fome fay, from Africa j but, if from the laft, it is in no great
quantities.

There is alfo a kind of lapis lazuli found in Germany and
Hungary ; but not fixed, though as hard as that from Afia,
which they call lefurflein and its colour afurbleau; but its co-
lour changes in fome time, and becomes greenifh : However, it
is ufed by painters.

The beft lapis lazuli >s that which is fixed ; that is, can endure
the fire without altering colour.

Before you proceed to extract your Ultramarine, take fome ac-
count of the manner, to know whether the ftone be good ; fcr,
imlefs it is fingularly fo, you will lofe your labour: Put pieces
thereof on live coals, and blow them continually for an hour ;
if they retain their fir ft hardnefs and colour afterwards, you may
conclude them good ; but, if thev crumble between your fingers,
they are naught. It may be tried otherwife in an iron ladle put
into a furnace with fome of the ftone to heat, and fo quench it
in ftrong vinegar; if the colour remains ftill unchanged and
fplendid, you may allure your felf it is good.

When you have made this trial, calcine it, which, to do the
eafier, break the ftone to pieces as fmall as hazle-nuts, wafh
them afterwards in warm water, and fet them in a crucible, on
a wind furnace, or into an iron ladle to re-unite ; then caft them
into a glazed earthen veffel of diftilled vinegar to quench them
in ; do thus feven times, to prepare them by calcination for pow-
dering, and to prevent their flicking to the mortar.

Thus calcined, dry them well, and fo powder them in a ftone
mortar well covered, and accordingly fearce it with the fame
caution, as perfumers do their moft delicate and fineft powders,
left the beft fhould go off and difpel itfelf in the air: And thus
preferve this precious powder with all imaginable care.

Some derive its name Ultramarine of the Latin ultra, beyond,
and marinusof or belonging to the fea; q. d. beyond fea, be-
eaufe firft brought into Europe from India and Perfia.

It is the common opinion, that the method of making it was
frft difcovered in England by a member of the Eaft-India com-
pany ; who, having a quarrel with his aflbciates3 made the fecret
public to be revenged of them.