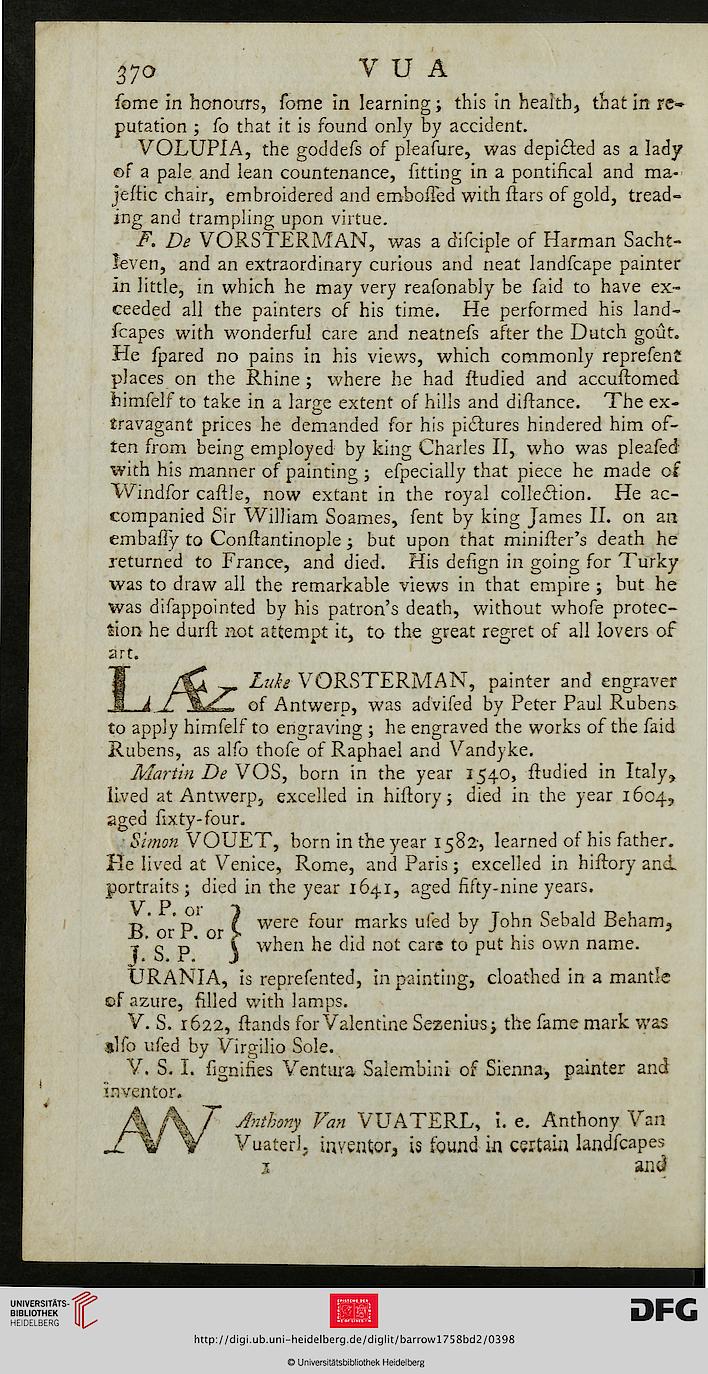 Information about OCR text
370 V U A

feme in honours, fome in learning; this in health, that in re-
putation ; fo that it is found only by accident.

VOLUPIA, the goddefs of pleafure, was depicted as a lady
of a pale and lean countenance, fitting in a pontifical and ma-
jeftic chair, embroidered and embofTed with ftars of gold, tread-
ing and trampling upon virtue.

F. De VORSTERMAN, was a difciple of Harman Sacht-
leven, and an extraordinary curious and neat landfcape painter
in little, in which he may very reafonably be faid to have ex-
ceeded all the painters of his time. He performed his land-
fcapes with wonderful care and neatnefs after the Dutch gout.
He fpared no pains in his views, which commonly reprefent
places on the Rhine ; where he had ftudied and accuftomed
himfelf to take in a large extent of hills and diftance. The ex-
travagant prices he demanded for his pictures hindered him of-
ten from being employed by king Charles II, who was pleafed
with his manner of painting ; efpecially that piece he made of
Windfor caftle, now extant in the royal collection. He ac-
companied Sir William Soames, fent by king James II. on an
embafly to Conftantinople ; but upon that minifter's death he
returned to France, and died. His defign in going for Turky
was to draw all the remarkable views in that empire ; but he
^vas difappointed by his patron's death, without whofe protec-
tion he durft not attempt it, to the great regret of all lovers of
art.

L/C Luhe VORSTERMAN, painter and engraver
.jTjB^L of Antwerp, was advifed by Peter Paul Rubens
to apply himfelf to engraving ; he engraved the works of the faid
Rubens, as alfo thofe of Raphael and Vandyke.

Martin De VOS, born in the year 1540, ftudied in Italy,
lived at Antwerp, excelled in hiitory; died in the year 1604,
aged fixty-four.

Simon VOUET, born in the year 1582, learned of his father.
He lived at Venice, Rome, and Paris; excelled in hiftoryar.i
portraits; died in the year 1641, aged fifty-nine years.

URANIA, is reprefented, in painting, cloathed in a mantle
of azure, filled with lamps.