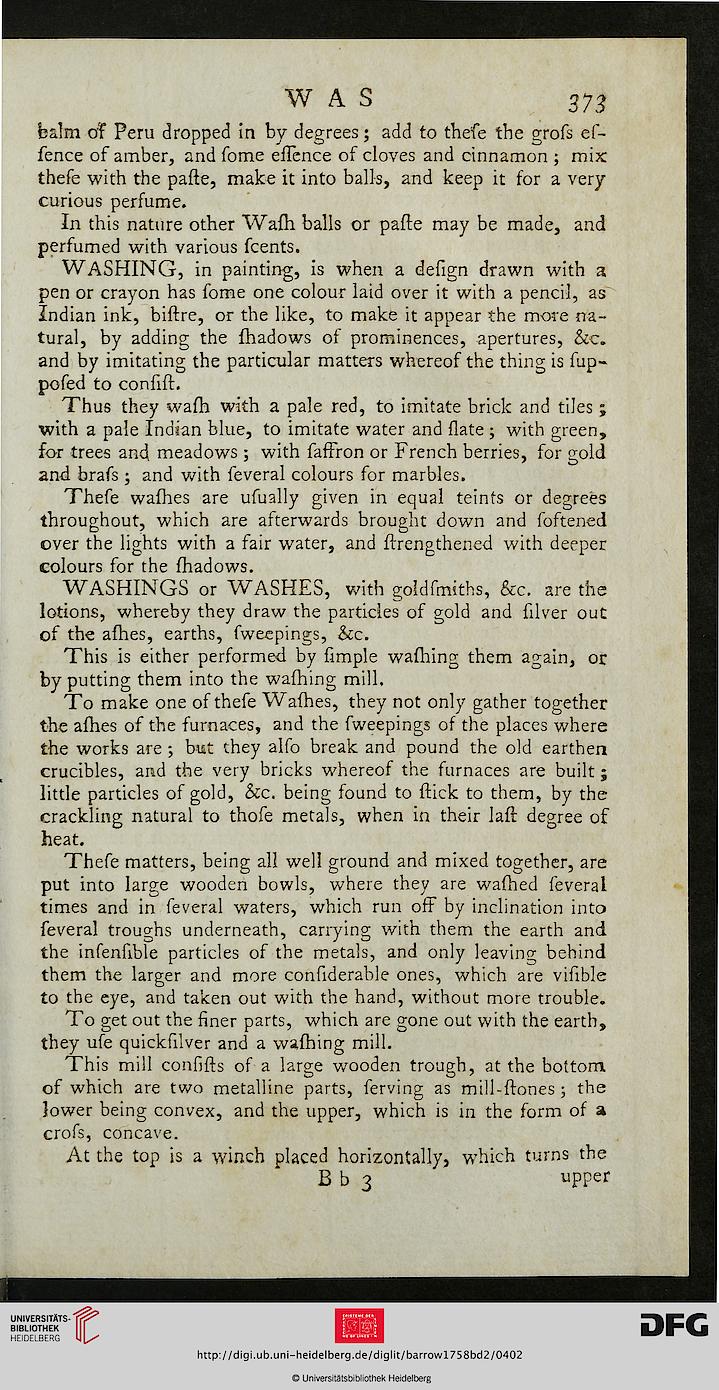 Information about OCR text
WAS 273

balm of Peru dropped in by degrees; add to thefe the grofs ef-
fence of amber, and fome elTence of cloves and cinnamon ; mix
thefe with the pafte, make it into balls, and keep it for a very
curious perfume.

In this nature other Wafh balls or pafte may be made, and
perfumed with various fcents.

WASHING, in painting, is when a defign drawn with a
pen or crayon has fome one colour laid over it with a pencil, as
Indian ink, biftre, or the like, to make it appear the more na-
tural, by adding the fhadows of prominences, apertures, &c.
and by imitating the particular matters whereof the thing is fup-
pofed to confift.

Thus they wafh with a pale red, to imitate brick and tiles ;
with a pale Indian blue, to imitate water and flate ; with green,
for trees and meadows ; with faffron or French berries, for gold
and brafs; and with feveral colours for marbles.

Thefe wafhes are ufually given in equal teinfs or degrees
throughout, which are afterwards brought down and foftened
over the lights with a fair water, and ftrengthened with deeper
colours for the fhadows.

WASHINGS or WASHES, with goldfmiths, &c. are the
lotions, whereby they draw the particles of gold and filver out
of the afhes, earths, fweepings, &c.

This is either performed by fimple wafhing them again, or
by putting them into the wafhing mill.

To make one of thefe Wafhes, they not only gather together
the afhes of the furnaces, and the fweepings of the places where
the works are ; but they alfo break and pound the old earthen
crucibles, and the very bricks whereof the furnaces are built;
little particles of gold, &c. being found to flick to them, by the
crackling natural to thofe metals, when in their laft degree of
heat.

Thefe matters, being all well ground and mixed together, are
put into large wooden bowls, where they are wafhed feveral
times and in feveral waters, which run oft by inclination into
feveral troughs underneath, carrying with them the earth and
the infenfible particles of the metals, and only leaving behind
them the larger and more confiderable ones, which are vifible
to the eye, and taken out with the hand, without more trouble.

To get out the finer parts, which are gone out with the earth,
they ufe quickfilver and a wafhing mill.

This mill confifts of a large wooden trough, at the bottom,
of which are two metalline parts, ferving as mill-ftones ; the
lower being convex, and the upper, which is in the form of a
crofs, concave.

At the top is a winch placed horizontally, which turns the