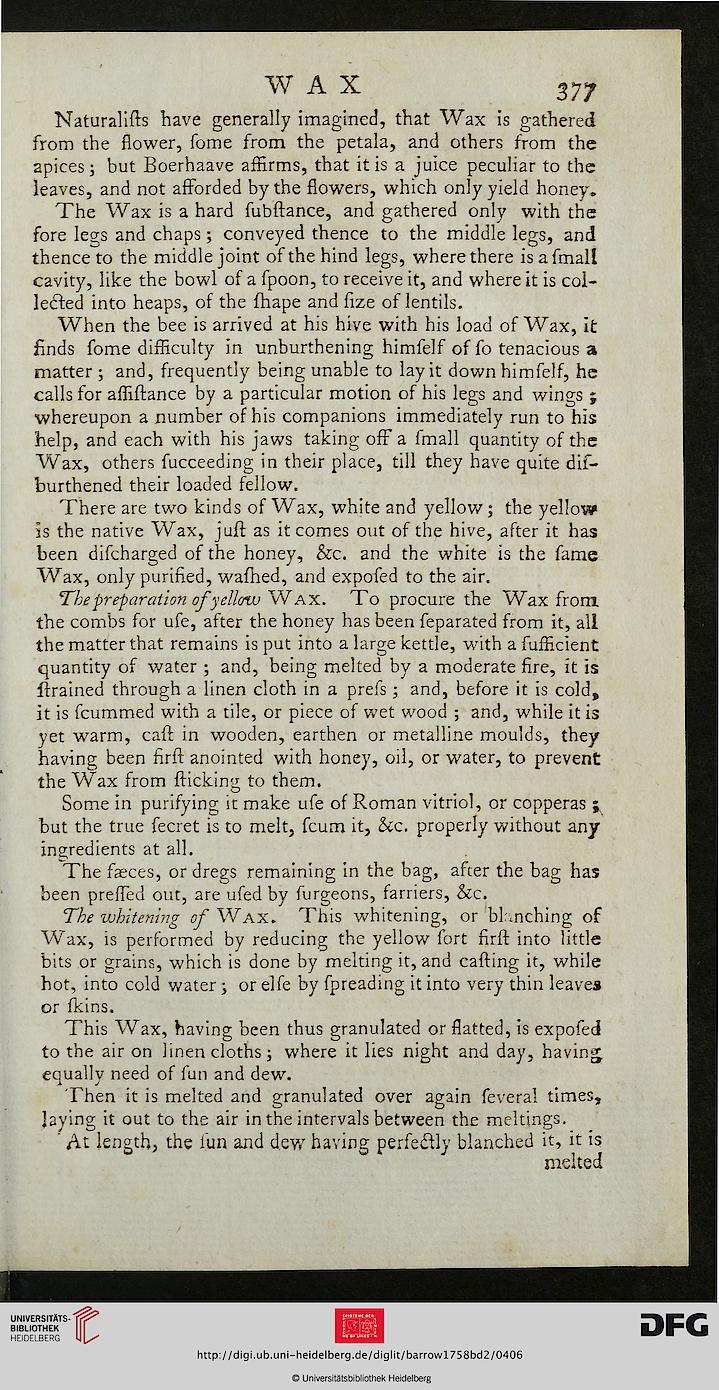 Naturalifts have generally imagined, that Wax is gathered
from the flower, fome from the petala, and others from the
apices; but Boerhaave affirms, that it is a juice peculiar to the
leaves, and not afforded by the flowers, which only yield honey.

The Wax is a hard fubftance, and gathered only with the
fore legs and chaps; conveyed thence to the middle legs, and
thence to the middle joint of the hind legs, where there isafmall
cavity, like the bowl of a fpoon, to receive it, and where it is col-
lected into heaps, of the fhape and fize of lentils.

When the bee is arrived at his hive with his load of Wax, it
finds fome difficulty in unburthening himfelf of fo tenacious a
matter ; and, frequently being unable to lay it down himfelf, he
calls for affiftance by a particular motion of his legs and wings ;
whereupon a number of his companions immediately run to his
help, and each with his jaws taking off a fmall quantity of the
W"ax, others fucceeding in their place, till they have quite dif-
burthened their loaded fellow.

There are two kinds of Wax, white and yellow; the yellow
is the native Wax, juft as it comes out of the hive, after it has
been difcharged of the honey, &c. and the white is the fame
Wax, only purified, warned, and expofed to the air.

The preparation of yellow Wax. To procure the Wax from
the combs for ufe, after the honey has been feparated from it, all
the matter that remains is put into a large kettle, with a fufficient
quantity of water ; and, being melted by a moderate fire, it is
ftrained through a linen cloth in a prefs; and, before it is cold,
it is fcummed with a tile, or piece of wet wood ; and, while it is
yet warm, caft in wooden, earthen or metalline moulds, they
having been firft anointed with honey, oil, or water, to prevent
the Wax from {ticking to them.

Some in purifying it make ufe of Roman vitriol, or copperas ;
but the true fecret is to melt, fcum it, he. properly without any
ingredients at all.

The fasces, or dregs remaining in the bag, after the bag has
been prefTed out, are ufed by furgeons, farriers, &c.

The whitening of Wax. This whitening, or blanching of
Wax, is performed by reducing the yellow fort firft into little
bits or grains, which is done by melting it, and calling it, while
hot, into cold water •> or elfe by fpreading it into very thin leaves
or fkins.

This Wax, having been thus granulated or flatted, is expofed
to the air on linen cloths; where it lies night and day, havin*
equally need of fun and dew.

Then it is melted and granulated over again fevera! times,
laying it out to the air in the intervals between the meltings.
' At length, the (tin and dew having perfectly blanched it, it is