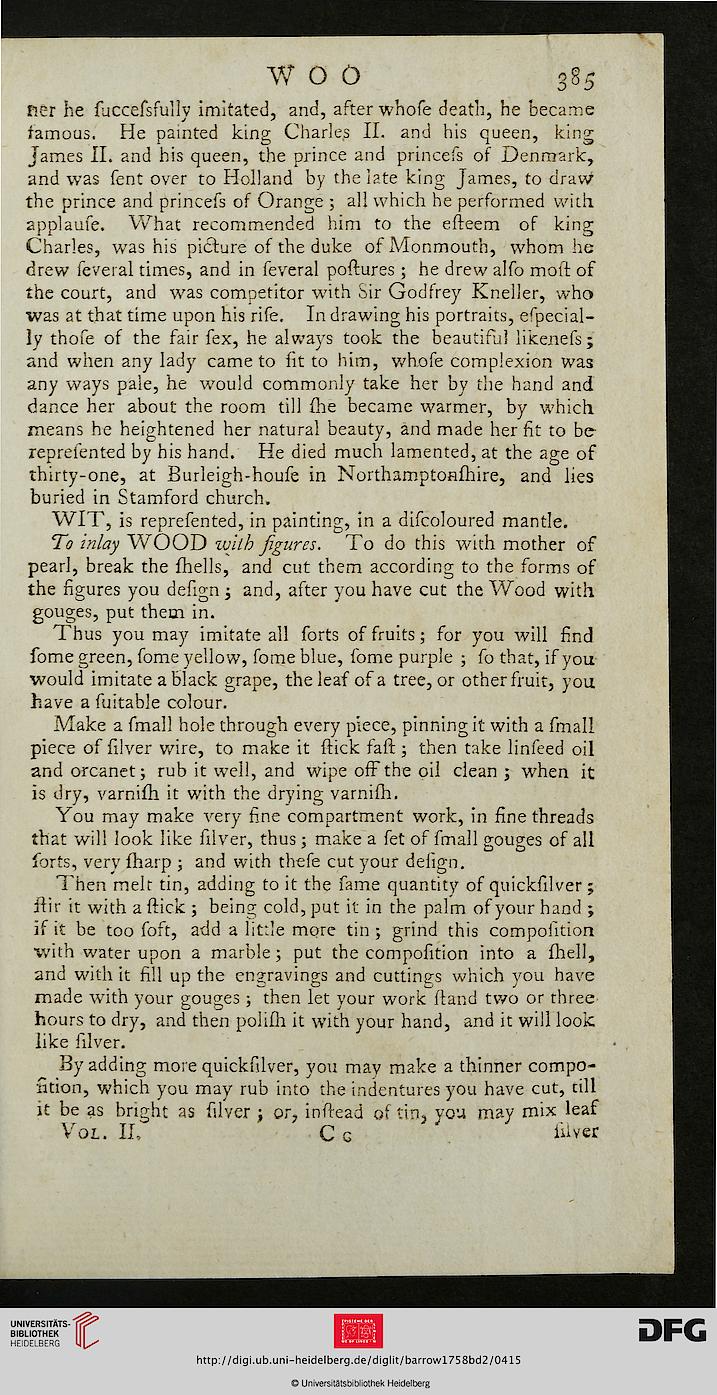 ner he fuccefsfully imitated, and, after whofe death, he became
famous. He painted king Charles II. and his queen, king
James II. and his queen, the prince and princefs of Denmark,
and was fent over to Holland by the late king James, to draw
the prince and princefs of Orange ; all which he performed with,
applaufe. What recommended him to the efteem of king
Charles, was his picture of the duke of Monmouth, whom he
drew feveial times, and in feveral poftures ; he drew alfo moil of
the court, and was competitor with Sir Godfrey Kneller, who
was at that time upon his rife. In drawing his portraits, especial-
ly thofe of the fair fex, he always took the beautiful likenefs;
and when any lady came to fit to him, whofe complexion was
any ways pale, he would commonly take her by the hand and
dance her about the room till (he became warmer, by which
means he heightened her natural beauty, and made her fit to be-
reprefented by his hand. He died much lamented, at the age of
thirty-one, at Burleigh-houfe in Northamptonfhire, and lies
buried in Stamford church.

WIT, is reprefented, in painting, in a difcoloured mantle.
To inlay WOOD with figures. To do this with mother of
pearl, break the fhells, and cut them according to the forms of
the figures you defign j and, after you have cut the Wood with,
gouges, put them in.

Thus you may imitate all forts of fruits; for you will find
fome green, fome yellow, fome blue, fome purple ; fo that, if you
would imitate a black grape, the leaf of a tree, or other fruit, you
have a fuitable colour.

Make a fmall hole through every piece, pinning it with a fmall
piece of filver wire, to make it flick faft ; then take linfeed oil
and orcanet; rub it well, and wipe off the oil clean ; when it
is dry, varnifh it with the drying varnifh.

You may make very fine compartment work, in fine threads
that will look like filver, thus; make a fet of fmall gouges of all
forts, very fharp ; and with thefe cut your defign.

Then melt tin, adding to it the fame quantity of quickfilver;
ftir it with a flack ; being cold, put it in the palm of your hand ;
if it be too foft, add a little more tin ; grind this compofition
with water upon a marble; put the compofition into a fhell,
and with it fill up the engravings and cuttings which you have
made with your gouges ; then let your work Hand two or three
hours to dry, and then polifh it with your hand, and it will look
like filver.

By adding more quickfilver, you may make a thinner compo-
sition, which you may rub into the indentures you have cut, till
it be as bright as filver ; or, inftead of tin, you may mix leaf