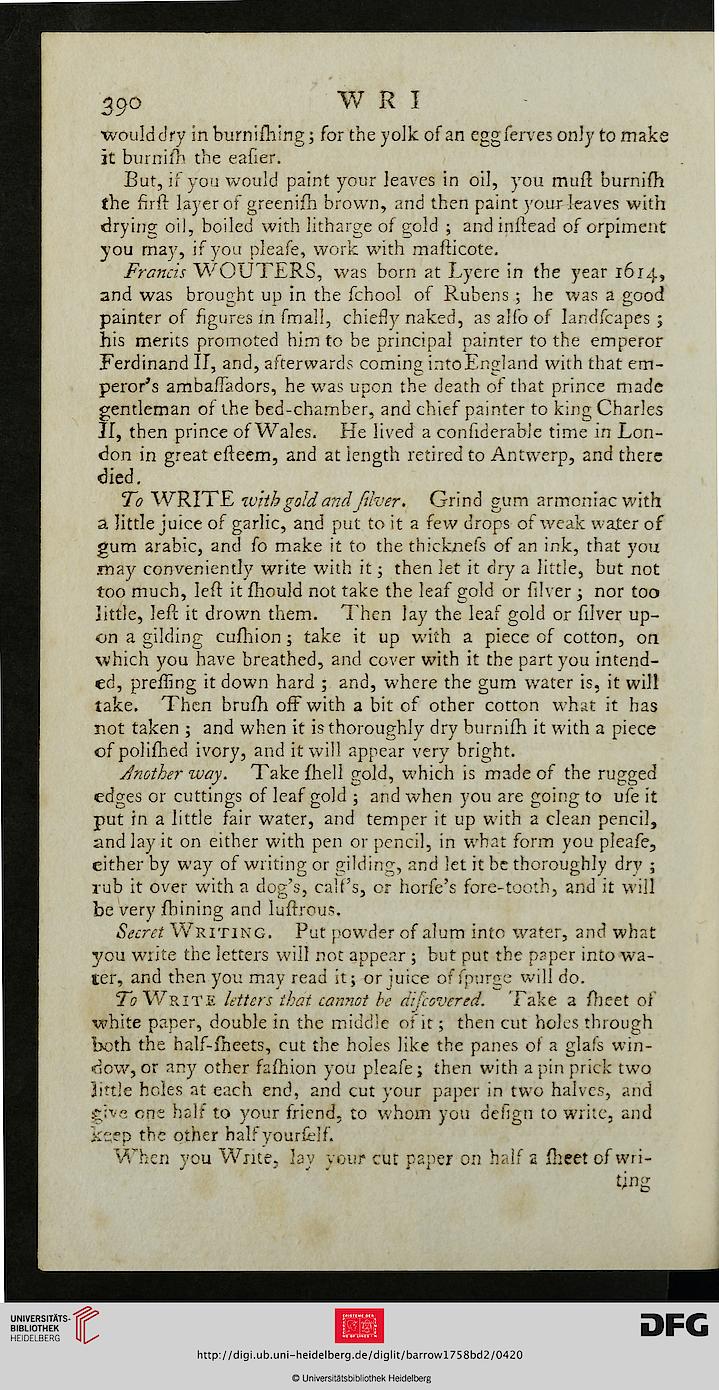 But, if you would paint your leaves in oil, you mufi burnifh
the firft layer of greenifh brown, and then paint your-leaves with
drying oil, boiled with litharge of gold ; and inftead of orpiment
you may, if you pleafe, work with mafticote.

Francis WOUTERS, was born at Lyere in the year 1614,
and was brought up in the fchool of Rubens; he was a good
painter of figures in fmall, chiefly naked, as alio of lardfcapes;
his merits promoted him to be principal painter to the emperor
Ferdinand If, and, afterwards coming intoEngland with that em-
peror's ambaJTadors, he was upon the death of that prince made
gentleman of the bed-chamber, and chief painter to king Charles
If, then prince of Wales. He lived a confiderable time in Lon-
don in great efteem, and at length retired to Antwerp, and there
died.

To WRITE ivhb gold and fiver. Grind gum armoniac with
a little juice of garlic, and put to it a few drops of weak water of
gum arabic, and fo make it to the thicknefs of an ink, that you
may conveniently write with it; then let it dry a little, but not
too much, left it mould not take the leaf gold or fib er ; nor too
little, left it drown them. Then lay the leaf gold or filver up-
on a gilding cufhion ; take it up with a piece of cotton, on
which you have breathed, and cover with it the part you intend-
ed, preffing it down hard ; and, where the gum water is, it will
take. Then brum off with a bit of other cotton what it has
not taken ; and when it is thoroughly dry burnifh it with a piece
of polifhed ivory, and it will appear very bright.

Another way. Take fhell gold, which is made of the rugged
edges or cuttings of leaf gold ; and when you are going to ufe it
put in a little fair water, and temper it up with a clean pencil,
and lay it on either with pen or pencil, in what form you pleafe,
either by way of writing or gilding, and let it be thoroughly drv ;
rub it over with a dog's, call's, or horfe's fore-tooth, and it will
be very mining and luftrou*.

Secret Writing. Put powder of alum into water, and what
you write the letters will not appear ; but put the paper into wa-
ter, and then you may read it; or juice ofYporge will do.

To WrITI letters that cannot be di[covered. Take a fheet of
■white paper, double in the middle of it; then cut holes through
both the half-fheets, cut the holes like the panes of a glafs win-
dow, or any other fafhion you pleafe; then with a pin prick two
3itt!e holes at each end, and cut your paper in two halves, and
give one half to your friend, to whom you defign to write, and
keep the other half yourfelf.

When you Write, by your cut paper on half 2 fheet of wri-
ting