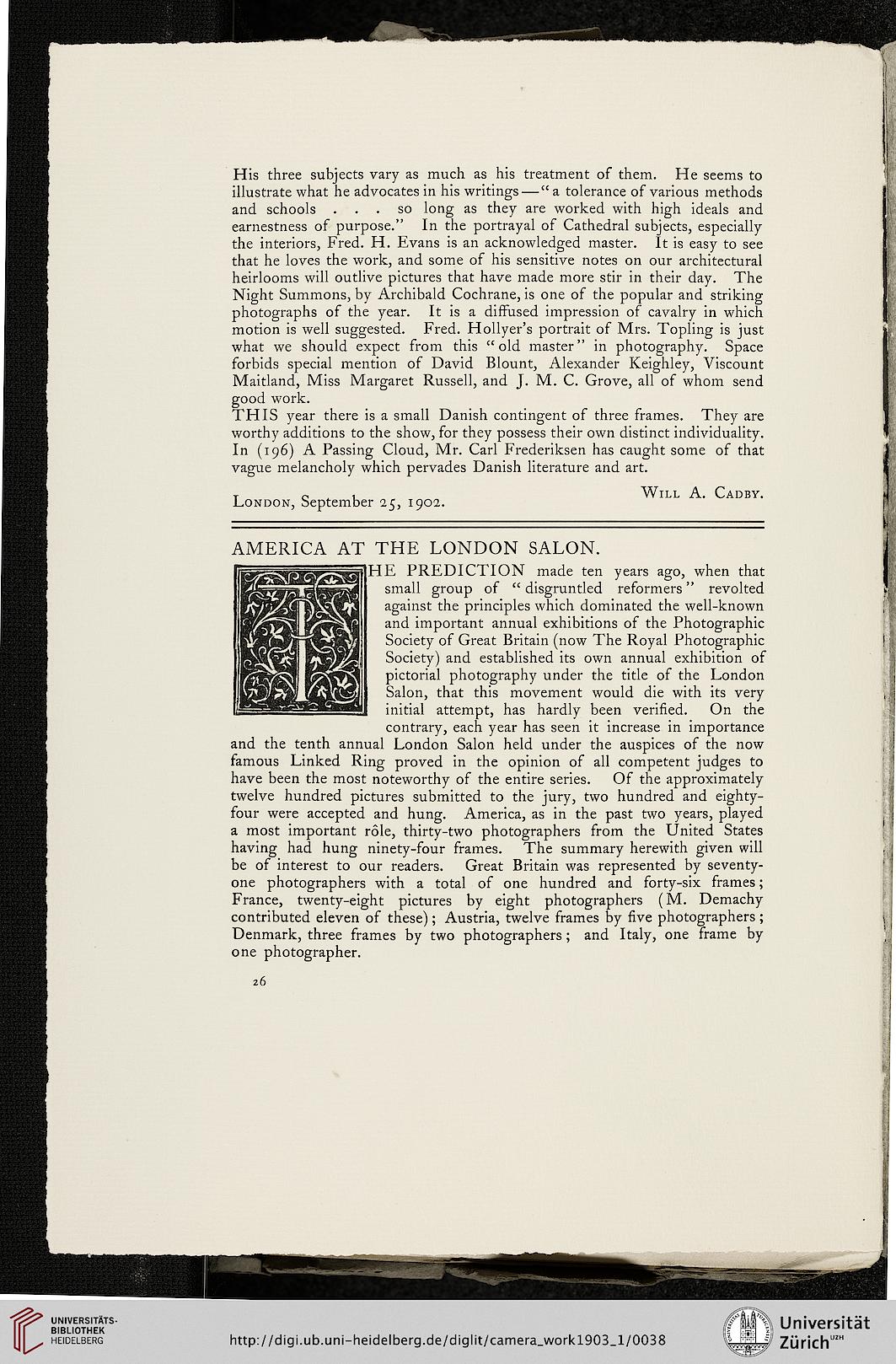 Information about OCR text
A manually made transcription or edition is also available for this page. Please change to the tab "transrciption" or "edition."
His three subjects vary as much as his treatment of them. He seems to
illustrate what he advocates in his writings — “ a tolerance of various methods
and schools ...so long as they are worked with high ideals and
earnestness of purpose.” In the portrayal of Cathedral subjects, especially
the interiors, Fred. H. Evans is an acknowledged master. It is easy to see
that he loves the work, and some of his sensitive notes on our architectural
heirlooms will outlive pictures that have made more stir in their day. The
Night Summons, by Archibald Cochrane, is one of the popular and striking
photographs of the year. It is a diffused impression of cavalry in which
motion is well suggested. Fred. Hollyer’s portrait of Mrs. Topling is just
what we should expect from this “ old master” in photography. Space
forbids special mention of David Blount, Alexander Keighley, Viscount
Maitland, Miss Margaret Russell, and J. M. C. Grove, all of whom send
good work.
THIS year there is a small Danish contingent of three frames. They are
worthy additions to the show, for they possess their own distinct individuality.
In (196) A Passing Cloud, Mr. Carl Frederiksen has caught some of that
vague melancholy which pervades Danish literature and art.

AMERICA AT THE LONDON SALON.
THE PREDICTION made ten years ago, when that
small group of “ disgruntled reformers ” revolted
against the principles which dominated the well-known
and important annual exhibitions of the Photographic
Society of Great Britain (now The Royal Photographic
Society) and established its own annual exhibition of
pictorial photography under the title of the London
Salon, that this movement would die with its very
initial attempt, has hardly been verified. On the
contrary, each year has seen it increase in importance
and the tenth annual London Salon held under the auspices of the now
famous Linked Ring proved in the opinion of all competent judges to
have been the most noteworthy of the entire series. Of the approximately
twelve hundred pictures submitted to the jury, two hundred and eighty-
four were accepted and hung. America, as in the past two years, played
a most important rôle, thirty-two photographers from the United States
having had hung ninety-four frames. The summary herewith given will
be of interest to our readers. Great Britain was represented by seventy-
one photographers with a total of one hundred and forty-six frames;
France, twenty-eight pictures by eight photographers (M. Demachy
contributed eleven of these); Austria, twelve frames by five photographers;
Denmark, three frames by two photographers; and Italy, one frame by
one photographer.