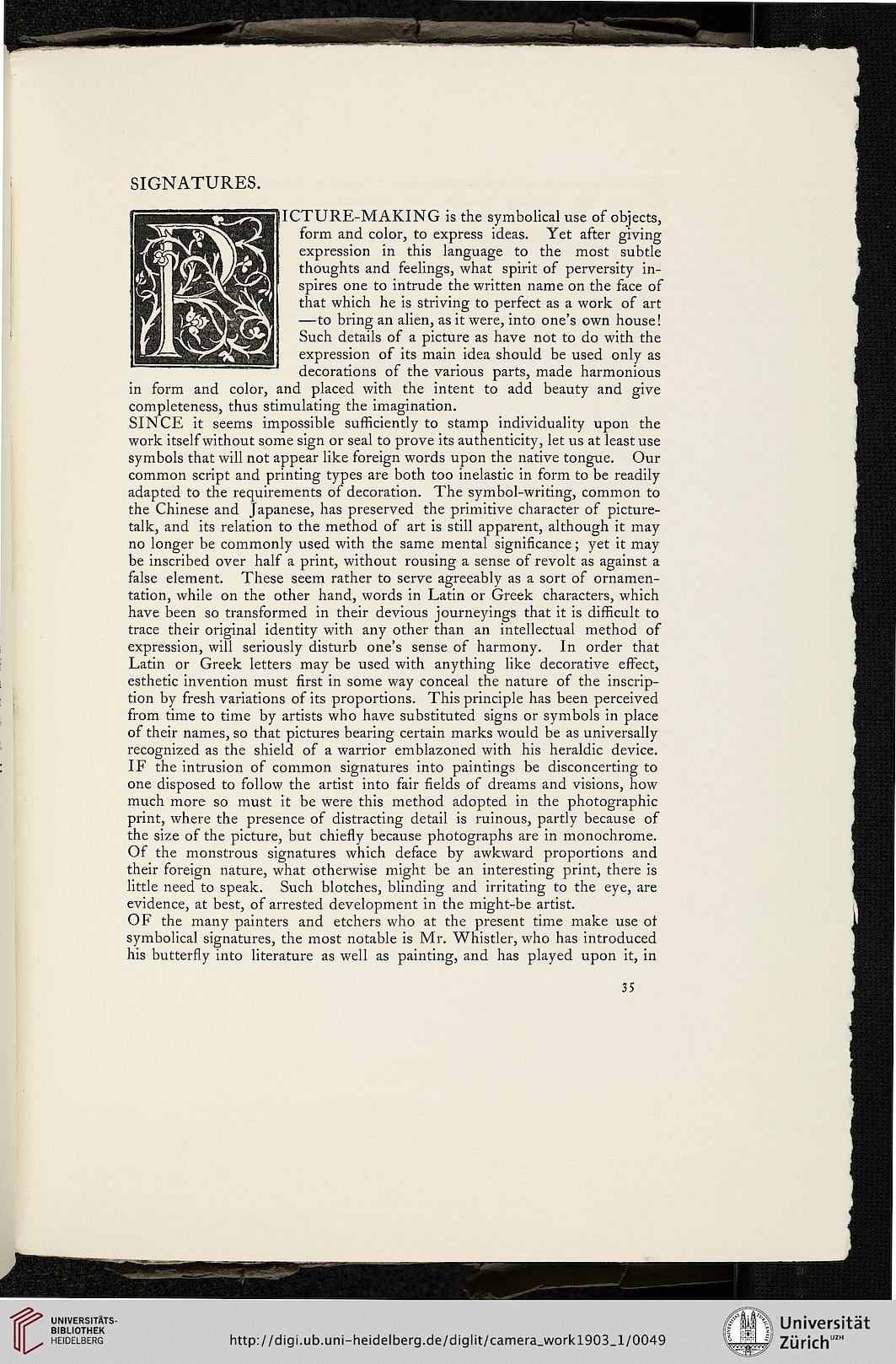 Information about OCR text
A manually made transcription or edition is also available for this page. Please change to the tab "transrciption" or "edition."
SIGNATURES.

PICTURE-MAKING is the symbolical use of objects,
form and color, to express ideas. Yet after giving
expression in this language to the most subtle
thoughts and feelings, what spirit of perversity in-
spires one to intrude the written name on the face of
that which he is striving to perfect as a work of art
—to bring an alien, as it were, into one’s own house!
Such details of a picture as have not to do with the
expression of its main idea should be used only as
decorations of the various parts, made harmonious
in form and color, and placed with the intent to add beauty and give
completeness, thus stimulating the imagination.
SINCE it seems impossible sufficiently to stamp individuality upon the
work itself without some sign or seal to prove its authenticity, let us at least use
symbols that will not appear like foreign words upon the native tongue. Our
common script and printing types are both too inelastic in form to be readily
adapted to the requirements of decoration. The symbol-writing, common to
the Chinese and Japanese, has preserved the primitive character of picture-
talk, and its relation to the method of art is still apparent, although it may
no longer be commonly used with the same mental significance; yet it may
be inscribed over half a print, without rousing a sense of revolt as against a
false element. These seem rather to serve agreeably as a sort of ornamen-
tation, while on the other hand, words in Latin or Greek characters, which
have been so transformed in their devious journeyings that it is difficult to
trace their original identity with any other than an intellectual method of
expression, will seriously disturb one's sense of harmony. In order that
Latin or Greek letters may be used with anything like decorative effect,
esthetic invention must first in some way conceal the nature of the inscrip-
tion by fresh variations of its proportions. This principle has been perceived
from time to time by artists who have substituted signs or symbols in place
of their names, so that pictures bearing certain marks would be as universally
recognized as the shield of a warrior emblazoned with his heraldic device.
IF the intrusion of common signatures into paintings be disconcerting to
one disposed to follow the artist into fair fields of dreams and visions, how
much more so must it be were this method adopted in the photographic
print, where the presence of distracting detail is ruinous, partly because of
the size of the picture, but chiefly because photographs are in monochrome.
Of the monstrous signatures which deface by awkward proportions and
their foreign nature, what otherwise might be an interesting print, there is
little need to speak. Such blotches, blinding and irritating to the eye, are
evidence, at best, of arrested development in the might-be artist.
OF the many painters and etchers who at the present time make use ot
symbolical signatures, the most notable is Mr. Whistler, who has introduced
his butterfly into literature as well as painting, and has played upon it, in