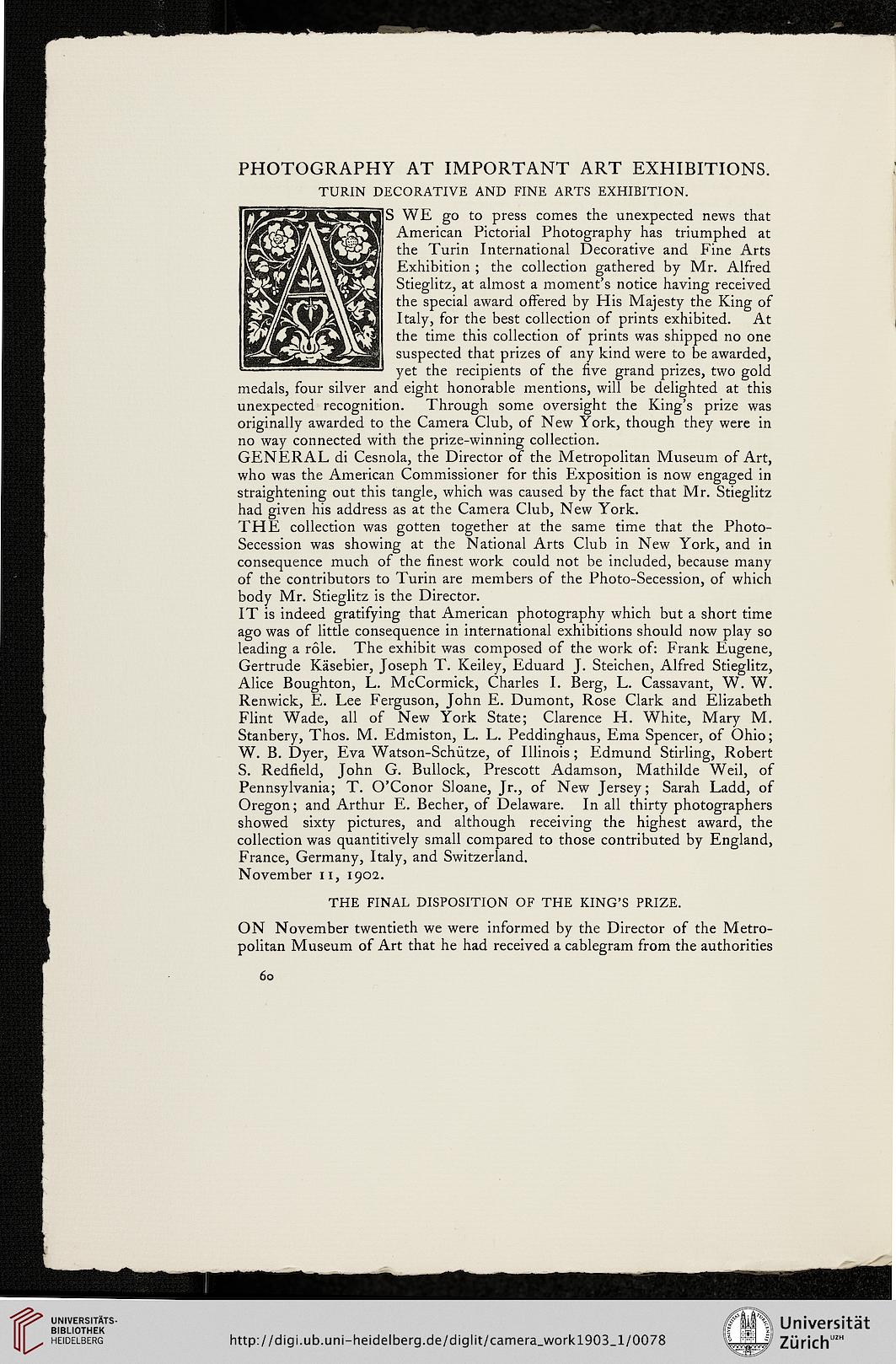 Information about OCR text
A manually made transcription or edition is also available for this page. Please change to the tab "transrciption" or "edition."
PHOTOGRAPHY AT IMPORTANT ART EXHIBITIONS.
TURIN DECORATIVE AND FINE ARTS EXHIBITION.

AS WE go to press comes the unexpected news that
American Pictorial Photography has triumphed at
the Turin International Decorative and Fine Arts
Exhibition ; the collection gathered by Mr. Alfred
Stieglitz, at almost a moment’s notice having received
the special award offered by His Majesty the King of
Italy, for the best collection of prints exhibited. At
the time this collection of prints was shipped no one
suspected that prizes of any kind were to be awarded,
yet the recipients of the five grand prizes, two gold
medals, four silver and eight honorable mentions, will be delighted at this
unexpected recognition. Through some oversight the King’s prize was
originally awarded to the Camera Club, of New York, though they were in
no way connected with the prize-winning collection.
GENERAL di Cesnola, the Director of the Metropolitan Museum of Art,
who was the American Commissioner for this Exposition is now engaged in
straightening out this tangle, which was caused by the fact that Mr. Stieglitz
had given his address as at the Camera Club, New York.
THE collection was gotten together at the same time that the Photo-
Secession was showing at the National Arts Club in New York, and in
consequence much of the finest work could not be included, because many
of the contributors to Turin are members of the Photo-Secession, of which
body Mr. Stieglitz is the Director.
IT is indeed gratifying that American photography which but a short time
ago was of little consequence in international exhibitions should now play so
leading a rôle. The exhibit was composed of the work of: Frank Eugene,
Gertrude Käsebier, Joseph T. Keiley, Eduard J. Steichen, Alfred Stieglitz,
Alice Boughton, L. McCormick, Charles I. Berg, L. Cassavant, W. W.
Renwick, E. Lee Ferguson, John E. Dumont, Rose Clark and Elizabeth
Flint Wade, all of New York State; Clarence H. White, Mary M.
Stanbery, Thos. M. Edmiston, L. L. Peddinghaus, Ema Spencer, of Ohio;
W. B. Dyer, Eva Watson-Schütze, of Illinois; Edmund Stirling, Robert
S. Redfield, John G. Bullock, Prescott Adamson, Mathilde Weil, of
Pennsylvania; T. O'Conor Sloane, Jr., of New Jersey; Sarah Ladd, of
Oregon; and Arthur E. Becher, of Delaware. In all thirty photographers
showed sixty pictures, and although receiving the highest award, the
collection was quantitively small compared to those contributed by England,
France, Germany, Italy, and Switzerland.
November 11, 1902.
THE FINAL DISPOSITION OF THE KING’SPRIZE.
ON November twentieth we were informed by the Director of the Metro-
politan Museum of Art that he had received a cablegram from the authorities