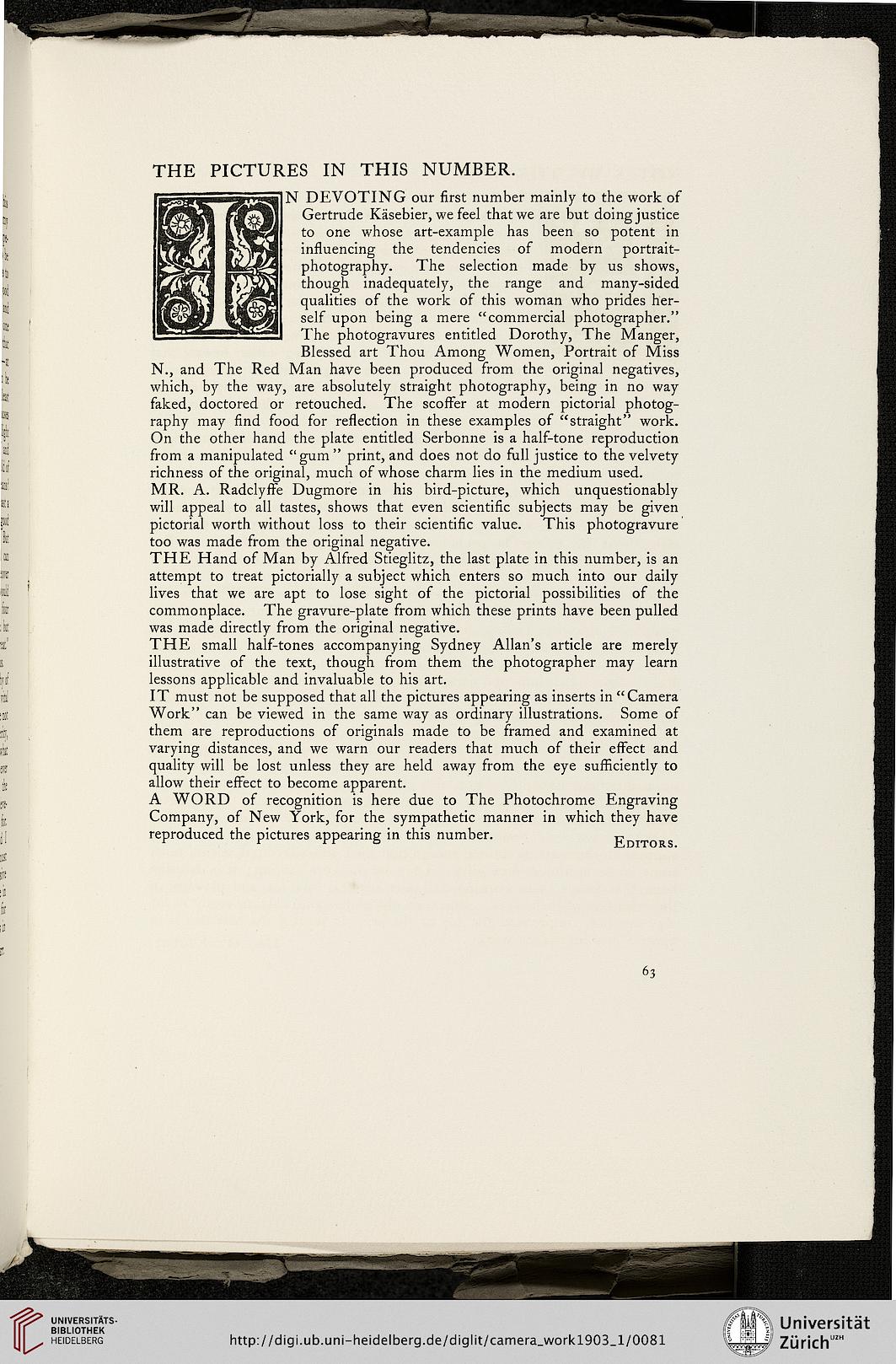 Information about OCR text
A manually made transcription or edition is also available for this page. Please change to the tab "transrciption" or "edition."
THE PICTURES IN THIS NUMBER.

IN DEVOTING our first number mainly to the work of
Gertrude Käsebier, we feel that we are but doing justice
to one whose art-example has been so potent in
influencing the tendencies of modern portrait-
photography. The selection made by us shows,
though inadequately, the range and many-sided
qualities of the work of this woman who prides her-
self upon being a mere “commercial photographer.”
The photogravures entitled Dorothy, The Manger,
Blessed art Thou Among Women, Portrait of Miss
N., and The Red Man have been produced from the original negatives,
which, by the way, are absolutely straight photography, being in no way
faked, doctored or retouched. The scoffer at modern pictorial photog-
raphy may find food for reflection in these examples of “straight” work.
On the other hand the plate entitled Serbonne is a half-tone reproduction
from a manipulated “ gum ” print, and does not do full justice to the velvety
richness of the original, much of whose charm lies in the medium used.
MR. A. Radclyffe Dugmore in his bird-picture, which unquestionably
will appeal to all tastes, shows that even scientific subjects may be given
pictorial worth without loss to their scientific value. This photogravure
too was made from the original negative.
THE Hand of Man by Alfred Stieglitz, the last plate in this number, is an
attempt to treat pictorially a subject which enters so much into our daily
lives that we are apt to lose sight of the pictorial possibilities of the
commonplace. The gravure-plate from which these prints have been pulled
was made directly from the original negative.
THE small half-tones accompanying Sydney Allan's article are merely
illustrative of the text, though from them the photographer may learn
lessons applicable and invaluable to his art.
IT must not be supposed that all the pictures appearing as inserts in "Camera
Work” can be viewed in the same way as ordinary illustrations. Some of
them are reproductions of originals made to be framed and examined at
varying distances, and we warn our readers that much of their effect and
quality will be lost unless they are held away from the eye sufficiently to
allow their effect to become apparent.
A WORD of recognition is here due to The Photochrome Engraving
Company, of New York, for the sympathetic manner in which they have
reproduced the pictures appearing in this number. Editors