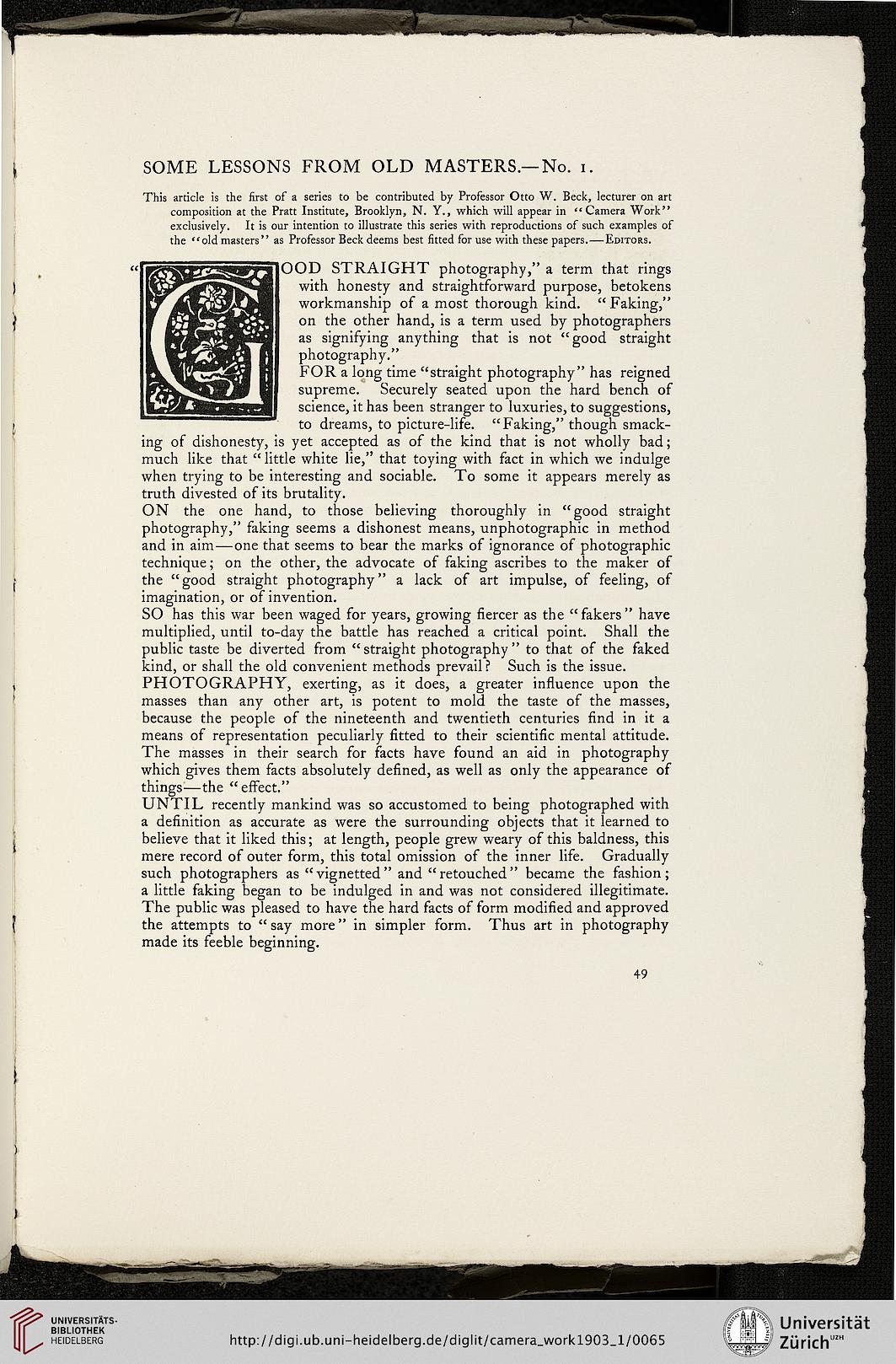 Information about OCR text
A manually made transcription or edition is also available for this page. Please change to the tab "transrciption" or "edition."
SOME LESSONS FROM OLD MASTERS—No. I.

This article is the first of a series to be contributed by Professor Otto W. Beck, lecturer on art
composition at the Pratt Institute, Brooklyn, N. Y., which will appear in “ Camera Work”
exclusively. It is our intention to illustrate this series with reproductions of such examples of
the “old masters” as Professor Beck deems best fitted for use with these papers.—Editors.


" GOOD STRAIGHT photography,” a term that rings
with honesty and straightforward purpose, betokens
workmanship of a most thorough kind. “Faking,”
on the other hand, is a term used by photographers
as signifying anything that is not “good straight
photography.”
FOR a long time “straight photography” has reigned
supreme. Securely seated upon the hard bench of
science, it has been stranger to luxuries, to suggestions,
to dreams, to picture-life. “Faking,” though smack-
ing of dishonesty, is yet accepted as of the kind that is not wholly bad;
much like that " little white lie,” that toying with fact in which we indulge
when trying to be interesting and sociable. To some it appears merely as
truth divested of its brutality.
ON the one hand, to those believing thoroughly in “good straight
photography,” faking seems a dishonest means, unphotographic in method
and in aim—one that seems to bear the marks of ignorance of photographic
technique; on the other, the advocate of faking ascribes to the maker of
the “good straight photography” a lack of art impulse, of feeling, of
imagination, or of invention.
SO has this war been waged for years, growing fiercer as the "fakers” have
multiplied, until to-day the battle has reached a critical point. Shall the
public taste be diverted from " straight photography ” to that of the faked
kind, or shall the old convenient methods prevail ? Such is the issue.
PHOTOGRAPHY, exerting, as it does, a greater influence upon the
masses than any other art, is potent to mold the taste of the masses,
because the people of the nineteenth and twentieth centuries find in it a
means of representation peculiarly fitted to their scientific mental attitude.
The masses in their search for facts have found an aid in photography
which gives them facts absolutely defined, as well as only the appearance of
things—the "effect.”
UNTIL recently mankind was so accustomed to being photographed with
a definition as accurate as were the surrounding objects that it learned to
believe that it liked this; at length, people grew weary of this baldness, this
mere record of outer form, this total omission of the inner life. Gradually
such photographers as " vignetted” and " retouched” became the fashion;
a little faking began to be indulged in and was not considered illegitimate.
The public was pleased to have the hard facts of form modified and approved
the attempts to " say more ” in simpler form. Thus art in photography
made its feeble beginning.