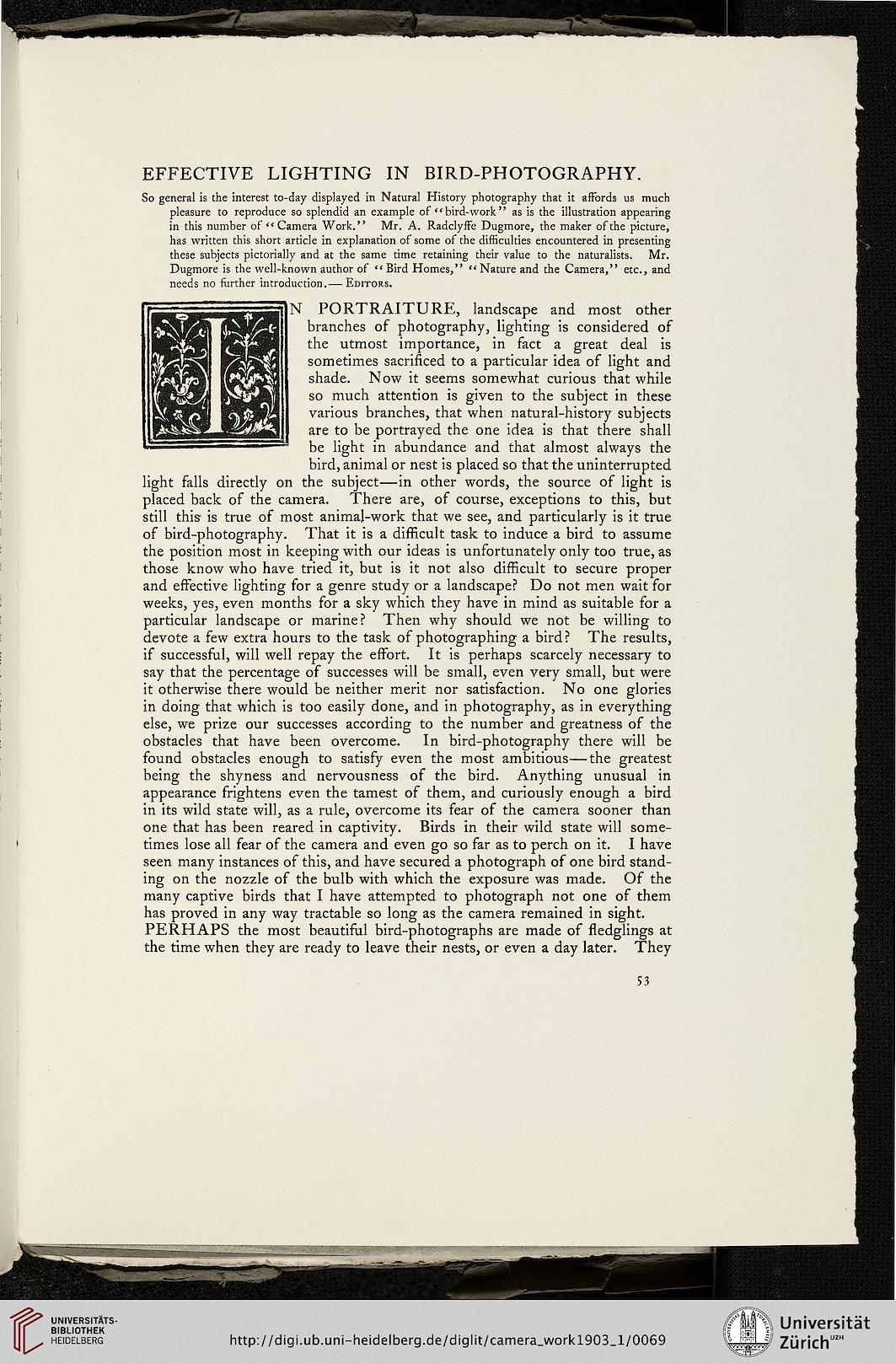 Information about OCR text
A manually made transcription or edition is also available for this page. Please change to the tab "transrciption" or "edition."
EFFECTIVE LIGHTING IN BIRD-PHOTOGRAPHY.
So general is the interest to-day displayed in Natural History photography that it affords us much
pleasure to reproduce so splendid an example of “ bird-work ” as is the illustration appearing
in this number of “ Camera Work." Mr. A. Radclyffe Dugmore, the maker of the picture,
has written this short article in explanation of some of the difficulties encountered in presenting
these subjects pictorially and at the same time retaining their value to the naturalists. Mr.
Dugmore is the well-known author of “ Bird Homes," “Nature and the Camera," etc., and
needs no further introduction.— Editors.
IN PORTRAITURE, landscape and most other
branches of photography, lighting is considered of
the utmost importance, in fact a great deal is
sometimes sacrificed to a particular idea of light and
shade. Now it seems somewhat curious that while
so much attention is given to the subject in these
various branches, that when natural-history subjects
are to be portrayed the one idea is that there shall
be light in abundance and that almost always the
bird, animal or nest is placed so that the uninterrupted
light falls directly on the subject—in other words, the source of light is
placed back of the camera. There are, of course, exceptions to this, but
still this is true of most animal-work that we see, and particularly is it true
of bird-photography. That it is a difficult task to induce a bird to assume
the position most in keeping with our ideas is unfortunately only too true, as
those know who have tried it, but is it not also difficult to secure proper
and effective lighting for a genre study or a landscape? Do not men wait for
weeks, yes, even months for a sky which they have in mind as suitable for a
particular landscape or marine? Then why should we not be willing to
devote a few extra hours to the task of photographing a bird? The results,
if successful, will well repay the effort. It is perhaps scarcely necessary to
say that the percentage of successes will be small, even very small, but were
it otherwise there would be neither merit nor satisfaction. No one glories
in doing that which is too easily done, and in photography, as in everything
else, we prize our successes according to the number and greatness of the
obstacles that have been overcome. In bird-photography there will be
found obstacles enough to satisfy even the most ambitious—the greatest
being the shyness and nervousness of the bird. Anything unusual in
appearance frightens even the tamest of them, and curiously enough a bird
in its wild state will, as a rule, overcome its fear of the camera sooner than
one that has been reared in captivity. Birds in their wild state will some-
times lose all fear of the camera and even go so far as to perch on it. I have
seen many instances of this, and have secured a photograph of one bird stand-
ing on the nozzle of the bulb with which the exposure was made. Of the
many captive birds that I have attempted to photograph not one of them
has proved in any way tractable so long as the camera remained in sight.
PERHAPS the most beautiful bird-photographs are made of fledglings at
the time when they are ready to leave their nests, or even a day later. They