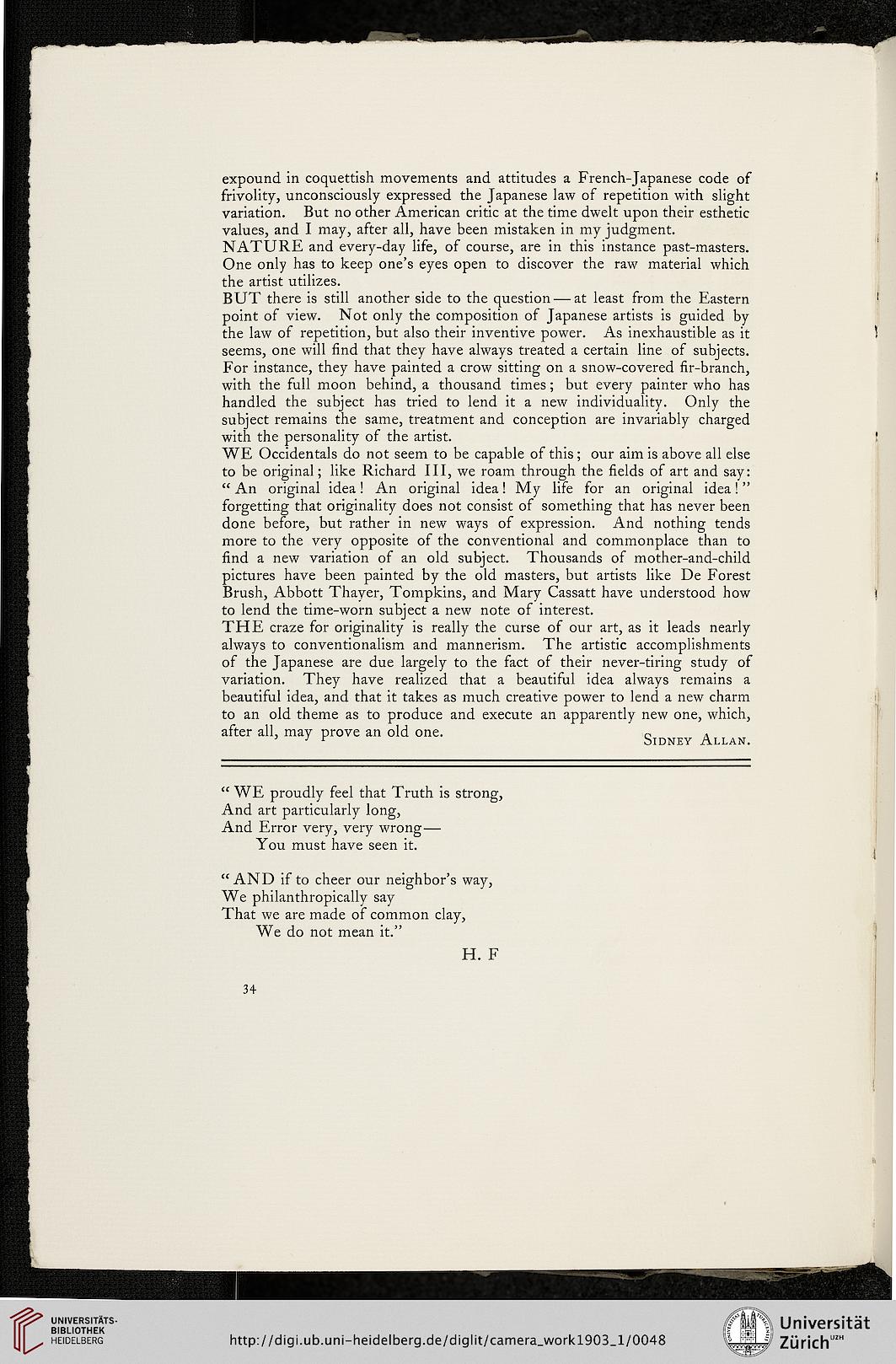 Information about OCR text
A manually made transcription or edition is also available for this page. Please change to the tab "transrciption" or "edition."
expound in coquettish movements and attitudes a French-Japanese code of
frivolity, unconsciously expressed the Japanese law of repetition with slight
variation. But no other American critic at the time dwelt upon their esthetic
values, and I may, after all, have been mistaken in my judgment.
NATURE and every-day life, of course, are in this instance past-masters.
One only has to keep one’s eyes open to discover the raw material which
the artist utilizes.
BUT there is still another side to the question — at least from the Eastern
point of view. Not only the composition of Japanese artists is guided by
the law of repetition, but also their inventive power. As inexhaustible as it
seems, one will find that they have always treated a certain line of subjects.
For instance, they have painted a crow sitting on a snow-covered fir-branch,
with the full moon behind, a thousand times; but every painter who has
handled the subject has tried to lend it a new individuality. Only the
subject remains the same, treatment and conception are invariably charged
with the personality of the artist.
WE Occidentals do not seem to be capable of this; our aim is above all else
to be original; like Richard III, we roam through the fields of art and say:
“ An original idea! An original idea! My life for an original idea! ”
forgetting that originality does not consist of something that has never been
done before, but rather in new ways of expression. And nothing tends
more to the very opposite of the conventional and commonplace than to
find a new variation of an old subject. Thousands of mother-and-child
pictures have been painted by the old masters, but artists like De Forest
Brush, Abbott Thayer, Tompkins, and Mary Cassatt have understood how
to lend the time-worn subject a new note of interest.
THE craze for originality is really the curse of our art, as it leads nearly
always to conventionalism and mannerism. The artistic accomplishments
of the Japanese are due largely to the fact of their never-tiring study of
variation. They have realized that a beautiful idea always remains a
beautiful idea, and that it takes as much creative power to lend a new charm
to an old theme as to produce and execute an apparently new one, which,
after all, may prove an old one. Sidney Allan

“WE proudly feel that Truth is strong,
And art particularly long,
And Error very, very wrong—
You must have seen it.
“ AND if to cheer our neighbor’sway,
We philanthropically say
That we are made of common clay,
We do not mean it.”