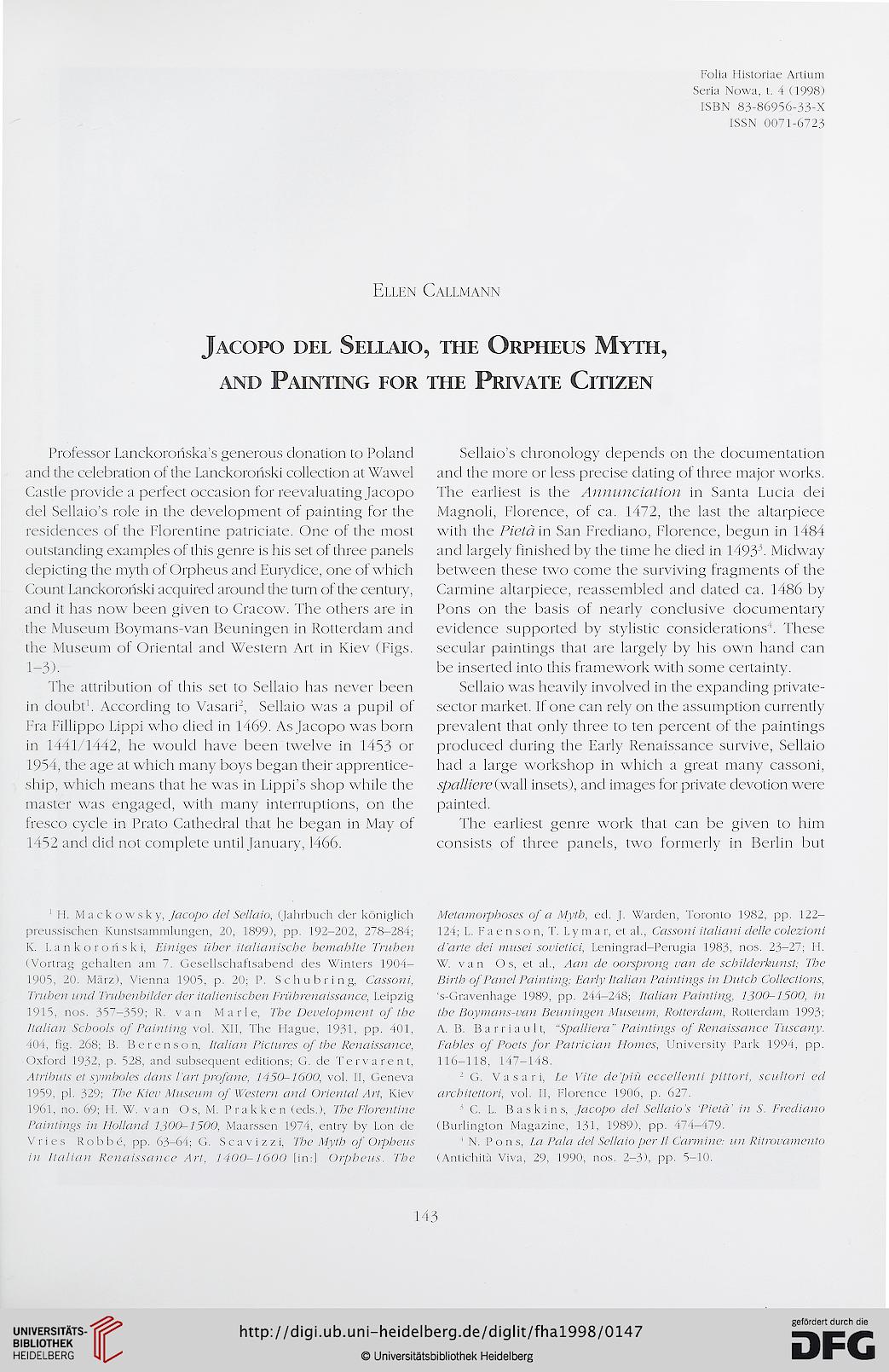 Professor Lanckorońska’s generous donation to Poland
and the celebration of the Lanckoroński collection at Wawel
Castle provide a perfect occasion for reevaluating Jacopo
del Sellaio’s role in the development of painting for the
residences of the Florentine patriciate. One of the most
outstanding examples of this genrc is his set of three panels
depicting the myth of Orpheus and Eurydice, one of which
Count Lanckoroński acąuired around the tum of the century,
and it has now been given to Cracow. The others are in
the Museurn Boymans-van Beuningen in Rotterdam and
the Museurn of Oriental and Western Art in Kiev (Figs.
1-3).

The attribution of this set to Sellaio has never been
in doubt1 * * * V. According to Vasari2, Sellaio was a pupil of
Fra Fillippo Lippi who clied in 1469- As Jacopo was born
in 1441/1442, he woulcl have been twelve in 1453 or
1954, the age at which many boys began their apprentice-
ship, which means that he was in Lippi’s shop while the
master was engaged, with many interruptions, on the
fresco cycle in Prato Cathedral that he began in May of
1452 and dicl not complete until January, 1466.

Sellaio’s chronology clepends on the documentation
and the morę or less precise dating of three major works.
The earliest is the Annunciation in Santa Lucia dei
Magnoli, Florence, of ca. 1472, the last the altarpiece
with the Pieta in San Frediano, Florence, begun in 1484
and largely finished by the time he clied in 14933. Midway
between these two come the surviving fragments of the
Carmine altarpiece, reassembled and dated ca. 1486 by
Pons on the basis of nearly conclusive documentary
evidence supported by stylistic considerations4. These
secular paintings that are largely by his own hand can
be inserted into this framework with some certainty.

Sellaio was heavily involved in the expanding private-
sector market. If one can rely on the assumption currently
prevalent that only three to ten percent of the paintings
produced during the Early Renaissance survive, Sellaio
had a larg* workshop in which a great many cassoni,
spalliere ( wali insets), and images for private devotion were
painted.

The earliest genre work that can be given to him
consists of three panels, two formerly in Berlin but