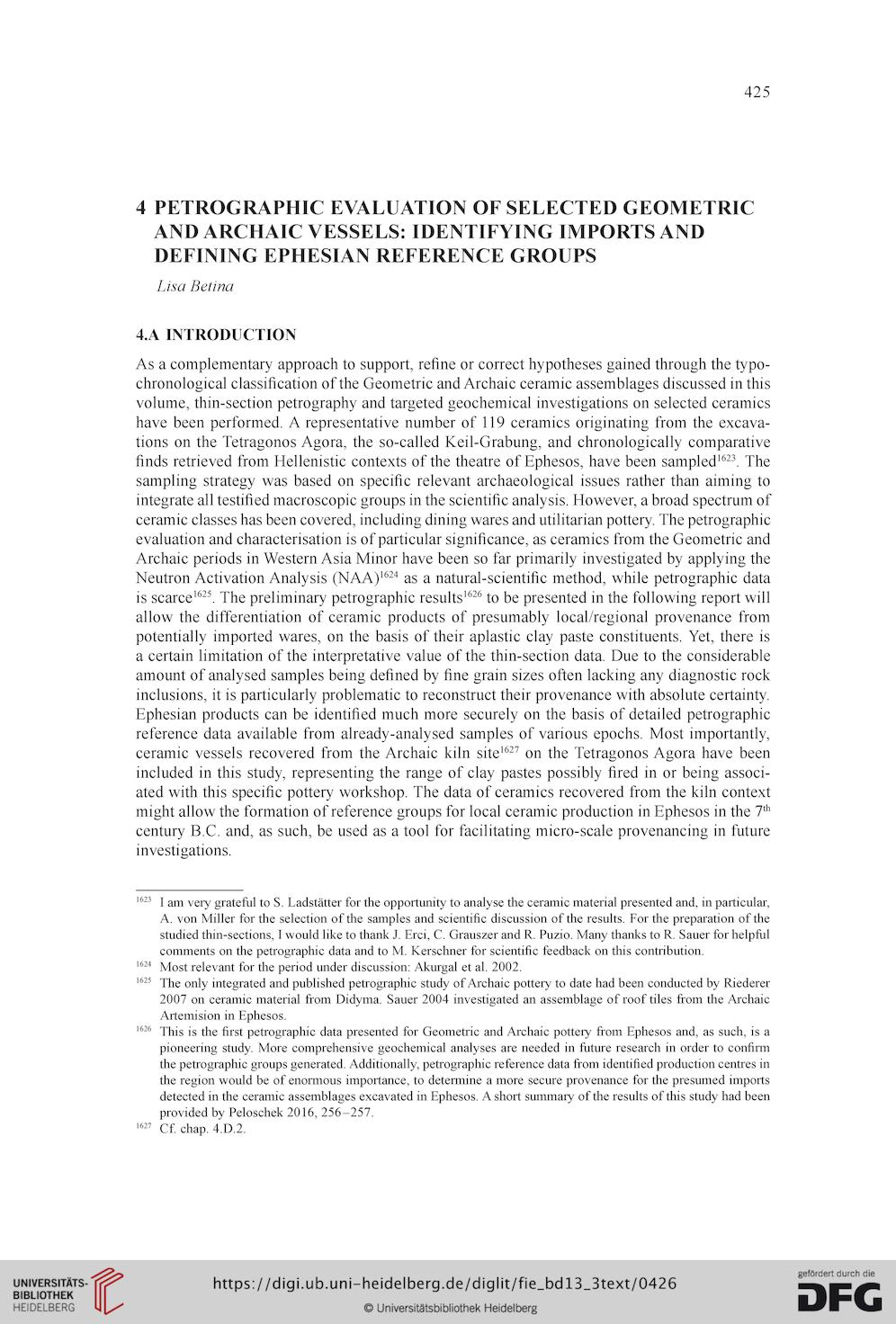 4 PETROGRAPHIC EVALUATION OF SELECTED GEOMETRIC
AND ARCHAIC VESSELS: IDENTIFYING IMPORTS AND
DEFINING EPHESIAN REFERENCE GROUPS
Lisa Betina
4.A INTRODUCTION
As a complementary approach to support, refine or correct hypotheses gained through the typo-
chronological Classification of the Geometrie and Archaic ceramic assemblages discussed in this
volume, thin-section petrography and targeted geochemical investigations on selected ceramics
have been performed. A representative number of 119 ceramics originating from the excava-
tions on the Tetragonos Agora, the so-called Keil-Grabung, and chronologically comparative
finds retrieved from Hellenistic contexts of the theatre of Ephesos, have been sampled1623. The
sampling strategy was based on specific relevant archaeological issues rather than aiming to
integrate all testified macroscopic groups in the scientific analysis. However, a broad spectrum of
ceramic classes has been covered, including dining wares and utilitarian pottery. The petrographic
evaluation and Characterisation is of particular significance, as ceramics from the Geometrie and
Archaic periods in Western Asia Minor have been so far primarily investigated by applying the
Neutron Activation Analysis (NAA)1624 as a natural-scientific method, while petrographic data
is scarce1625. The preliminary petrographic results1626 to be presented in the following report will
allow the differentiation of ceramic products of presumably local/regional provenance from
potentially imported wares, on the basis of their aplastic clay paste constituents. Yet, there is
a certain limitation of the interpretative value of the thin-section data. Due to the considerable
amount of analysed samples being defined by fine gram sizes often lacking any diagnostic rock
inclusions, it is particularly problematic to reconstruct their provenance with absolute certainty.
Ephesian products can be identified much more securely on the basis of detailed petrographic
reference data available from already-analysed samples of various epochs. Most importantly,
ceramic vessels recovered from the Archaic kiln site1627 on the Tetragonos Agora have been
included in this study, representing the ränge of clay pastes possibly fired in or being associ-
ated with this specific pottery workshop. The data of ceramics recovered from the kiln context
might allow the formation of reference groups for local ceramic production in Ephesos in the 7th
Century B.C. and, as such, be used as a tool for facilitating micro-scale provenancing in future
investigations.

1623 I am very grateful to S. Ladstätter for the opportunity to analyse the ceramic material presented and, in particular,
A. von Miller for the selection of the samples and scientific discussion of the results. For the preparation of the
studied thin-sections, I would like to thank J. Erci, C. Grauszer and R. Puzio. Many thanks to R. Sauer for helpful
comments on the petrographic data and to M. Kerschner for scientific feedback on this contribution.
1624 Most relevant for the period under discussion: Akurgal et al. 2002.
1625 The only integrated and published petrographic study of Archaic pottery to date had been conducted by Riederer
2007 on ceramic material from Didyma. Sauer 2004 investigated an assemblage of roof tiles from the Archaic
Artemision in Ephesos.
1626 This is the first petrographic data presented for Geometrie and Archaic potteiy from Ephesos and, as such, is a
pioneering study. More comprehensive geochemical analyses are needed in future research in order to confirm
the petrographic groups generated. Additionally, petrographic reference data from identified production centres in
the region would be of enonnous importance, to determine a more secure provenance for the presumed imports
detected in the ceramic assemblages excavated in Ephesos. A short summary of the results of this study had been
provided by Peloschek 2016, 256-257.
1627 Cf. chap. 4.D.2.