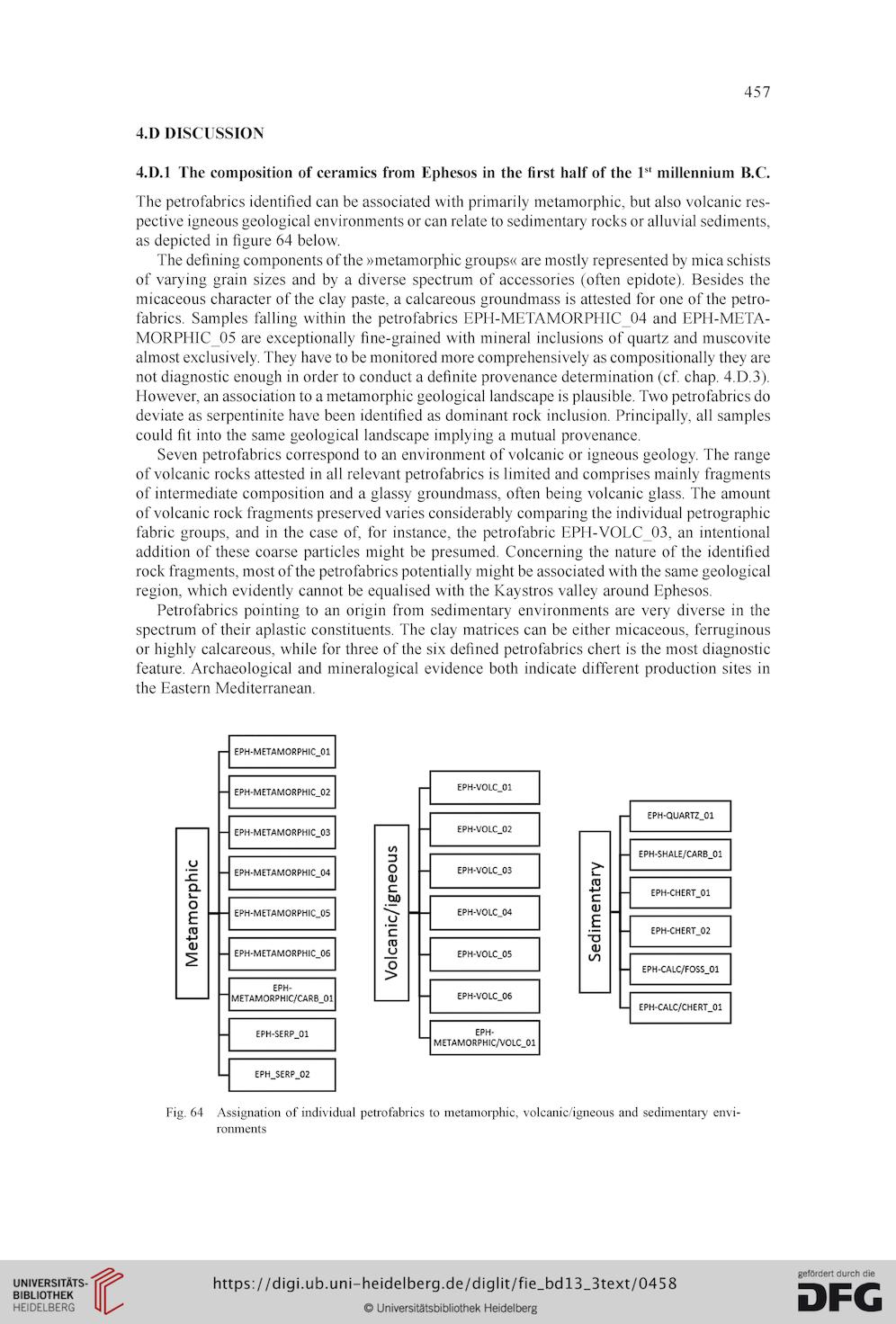 4.D DISCUSSION
4.D.1 The composition of ceramics from Ephesos in the first half of the lst mifiennium B.C.
The petrofabrics identified can be associated with primarily metamorphic, but also volcanic res-
pective igneous geological environments or can relate to sedimentary rocks or alluvial Sediments,
as depicted in figure 64 below.
The defining components of the »metamorphic groups« are mostly represented by mica schists
of varying grain sizes and by a diverse spectrum of accessories (often epidote). Besides the
micaceous character of the clay paste, a calcareous groundmass is attested for one of the petro-
fabrics. Samples falling within the petrofabrics EPH-METAMORPHIC 04 and EPH-META-
MORPHIC 05 are exceptionally fine-grained with mineral inclusions of quartz and muscovite
almost exclusively. They have to be monitored more comprehensively as compositionally they are
not diagnostic enough in order to conduct a definite provenance determination (cf. chap. 4.D.3).
However, an association to a metamorphic geological landscape is plausible. Two petrofabrics do
deviate as serpentinite have been identified as dominant rock inclusion. Principally, all samples
could fit into the same geological landscape implying a mutual provenance.
Seven petrofabrics correspond to an environment of volcanic or igneous geology. The ränge
of volcanic rocks attested in all relevant petrofabrics is limited and comprises mainly fragments
of intermediate composition and a glassy groundmass, often being volcanic glass. The amount
of volcanic rock fragments preserved varies considerably comparing the individual petrographic
fabric groups, and in the case of, for instance, the petrofabric EPH-VOLC 03, an intentional
addition of these coarse particles might be presumed. Concerning the nature of the identified
rock fragments, most of the petrofabrics potentially might be associated with the same geological
region, which evidently cannot be equalised with the Kaystros valley around Ephesos.
Petrofabrics pointing to an origin from sedimentary environments are very diverse in the
spectrum of their aplastic constituents. The clay matrices can be either micaceous, ferruginous
or highly calcareous, while for three of the six defined petrofabrics chert is the most diagnostic
feature. Archaeological and mineralogical evidence both indicate different production sites in
the Eastern Mediterranean.