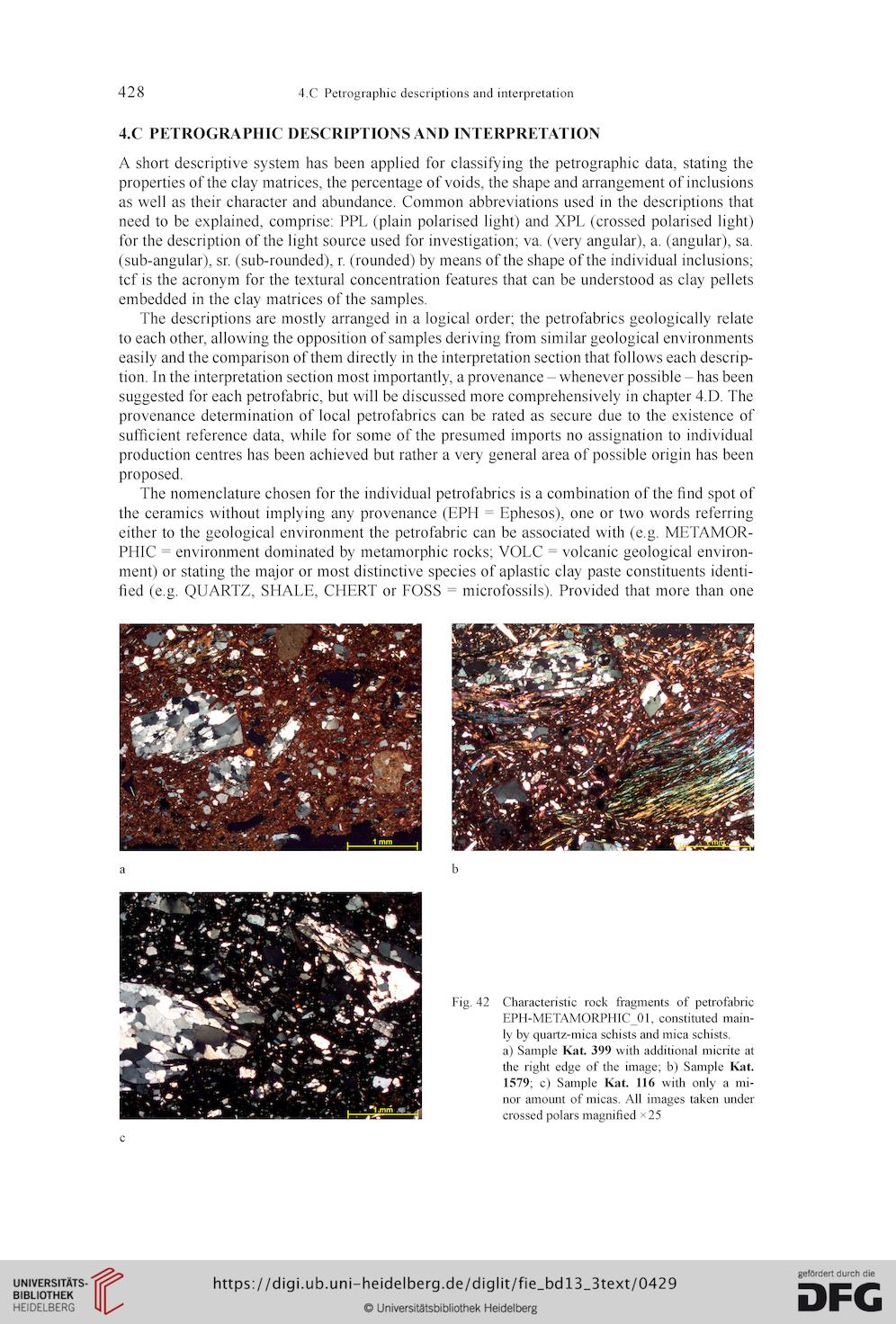 A short descriptive System has been applied for classifying the petrographic data, stating the
properties of the clay matrices, the percentage of voids, the shape and arrangement of inclusions
as well as their character and abundance. Common abbreviations used in the descriptions that
need to be explained, comprise: PPL (plain polarised light) and XPL (crossed polarised light)
for the description of the light source used for investigation; va. (very angular), a. (angular), sa.
(sub-angular), sr. (sub-rounded), r. (rounded) by means of the shape of the individual inclusions;
tef is the acronym for the textural concentration features that can be understood as clay pellets
embedded in the clay matrices of the samples.
The descriptions are mostly arranged in a logical order; the petrofabrics geologically relate
to each other, allowing the Opposition of samples deriving from similar geological environments
easily and the comparison of them direetly in the Interpretation section that follows each descrip-
tion. In the Interpretation section most importantly, a provenance - whenever possible - has been
suggested for each petrofabric, but will be discussed more comprehensively in chapter 4.D. The
provenance determination of local petrofabrics can be rated as secure due to the existence of
sufficient reference data, while for some of the presumed imports no assignation to individual
production centres has been achieved but rather a very general area of possible origin has been
proposed.
The nomenclature chosen for the individual petrofabrics is a combination of the find spot of
the ceramics without implying any provenance (EPH = Ephesos), one or two words referring
either to the geological environment the petrofabric can be associated with (e.g. METAMOR-
PHIC = environment dominated by metamorphic rocks; VOLC = volcanic geological environ-
ment) or stating the major or most distinctive species of aplastic clay paste constituents identi-
fied (e.g. QLTARTZ, SHALE, CHERT or FOSS = microfossils). Provided that more than one

Fig. 42 Characteristic rock Fragments of petrofabric
EPH-METAMORPHIC Ol, constituted main-
ly by quartz-mica schists and mica schists.
a) Sample Kat. 399 with additional micrite at
the right edge of the image; b) Sample Kat.
1579; c) Sample Kat. 116 with only a mi-
nor amount of micas. All images taken ander
crossed polars magnified x 25