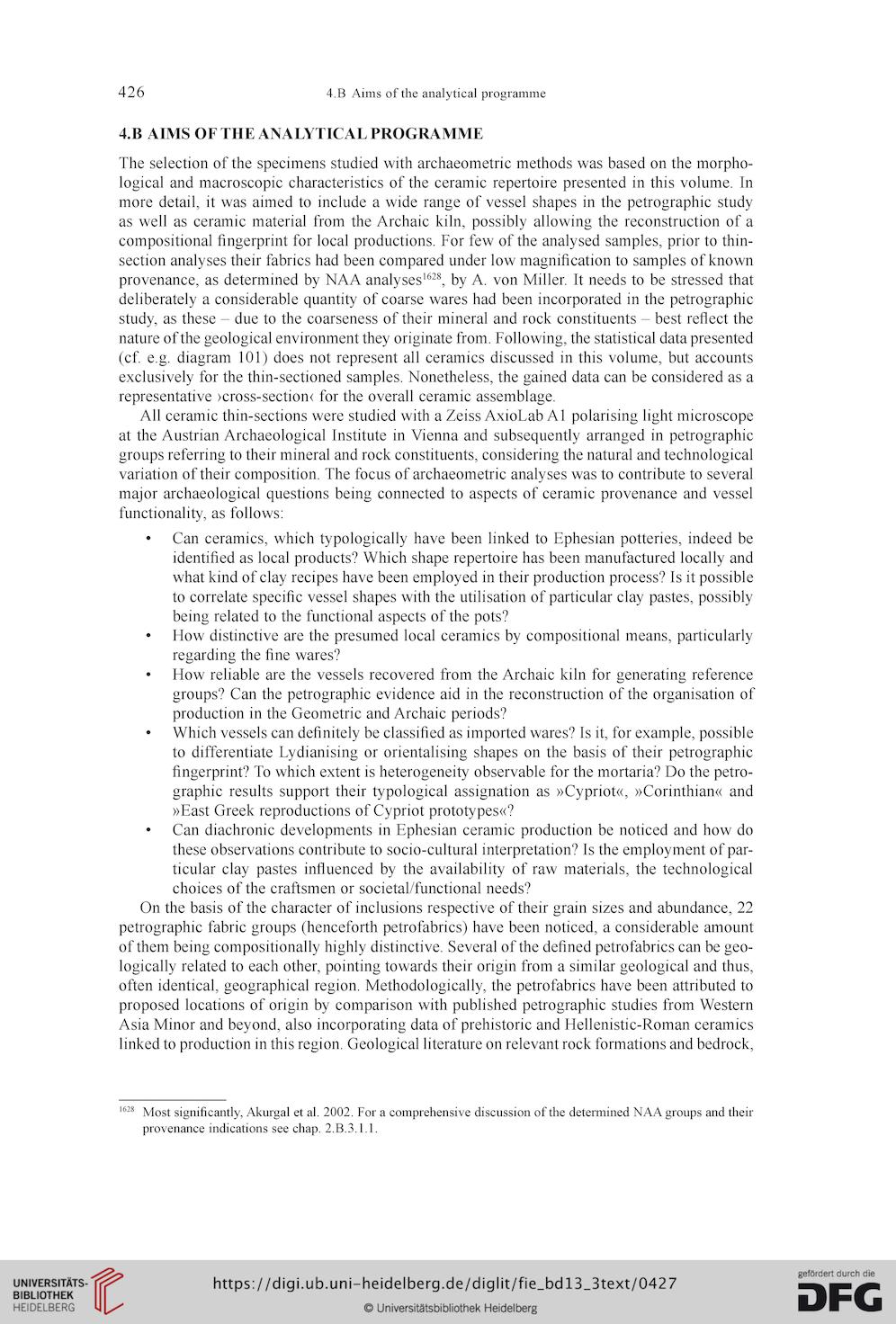 4.B Aims of the analytical Programme

4.B AIMS OF THE ANALYTICAL PROGRAMME
The selection of the specimens studied with archaeometric methods was based on the morpho-
logical and macroscopic characteristics of the ceramic repertoire presented in this volume. In
more detail, it was aimed to include a wide ränge of vessel shapes in the petrographic study
as well as ceramic material from the Archaic kiln, possibly allowing the reconstruction of a
compositional fingerprint for local productions. For few of the analysed samples, prior to thin-
section analyses their fabrics had been compared ander low magnification to samples of known
provenance, as determined by NAA analyses1628, by A. von Miller. It needs to be stressed that
deliberately a considerable quantity of coarse wares had been incorporated in the petrographic
study, as these - due to the coarseness of their mineral and rock constituents - best reflect the
nature of the geological environment they originate from. Following, the Statistical data presented
(cf. e.g. diagram 101) does not represent all ceramics discussed in this volume, but accounts
exclusively for the thin-sectioned samples. Nonetheless, the gained data can be considered as a
representative >cross-section< for the overall ceramic assemblage.
All ceramic thin-sections were studied with a Zeiss AxioLab Al polarising light microscope
at the Austrian Archaeological Institute in Vienna and subsequently arranged in petrographic
groups referring to their mineral and rock constituents, considering the natural and technological
Variation of their composition. The focus of archaeometric analyses was to contribute to several
major archaeological questions being connected to aspects of ceramic provenance and vessel
functionality, as follows:
• Can ceramics, which typologically have been linked to Ephesian potteries, indeed be
identified as local products? Which shape repertoire has been manufactured locally and
what kind of clay recipes have been employed in their production process? Is it possible
to correlate specific vessel shapes with the Utilisation of particular clay pastes, possibly
being related to the functional aspects of the pots?
• How distinctive are the presumed local ceramics by compositional means, particularly
regarding the fine wares?
• How reliable are the vessels recovered from the Archaic kiln for generating reference
groups? Can the petrographic evidence aid in the reconstruction of the Organisation of
production in the Geometrie and Archaic periods?
• Which vessels can definitely be classified as imported wares? Is it, for example, possible
to differentiate Lydianising or orientalising shapes on the basis of their petrographic
fingerprint? To which extent is heterogeneity observable for the mortaria? Do the petro-
graphic results Support their typological assignation as »Cypriot«, »Corinthian« and
»East Greek reproductions of Cypriot prototypes«?
• Can diachronic developments in Ephesian ceramic production be noticed and how do
these observations contribute to socio-cultural Interpretation? Is the employment of par-
ticular clay pastes influenced by the availability of raw materials, the technological
choices of the craftsmen or societal/functional needs?
On the basis of the character of inclusions respective of their grain sizes and abundance, 22
petrographic fabric groups (henceforth petrofabrics) have been noticed, a considerable amount
of them being compositionally highly distinctive. Several of the defined petrofabrics can be geo-
logically related to each other, pointing towards their origin from a similar geological and thus,
often identical, geographical region. Methodologically, the petrofabrics have been attributed to
proposed locations of origin by comparison with published petrographic studies from Western
Asia Minor and beyond, also incorporating data of prehistoric and Hellenistic-Roman ceramics
linked to production in this region. Geological literature on relevant rock formations and bedrock,

1628 Most significantly, Akurgal et al. 2002. For a comprehensive discussion of the determined NAA groups and their
provenance indications see chap. 2.B.3.1.1.