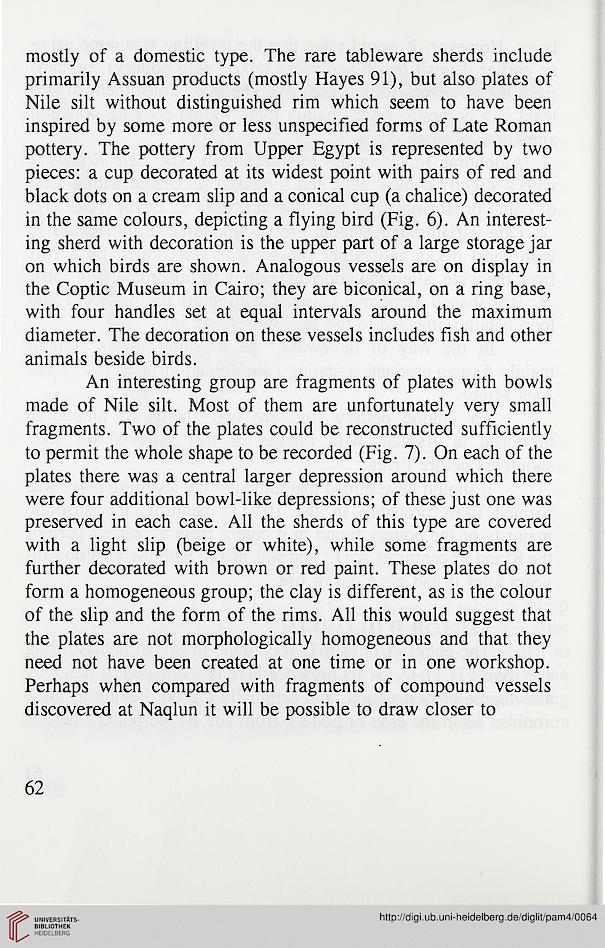 Hinweise zum OCR-Text
mostly of a domestic type. The rare tableware sherds include
primarily Assuan products (mostly Hayes 91), but also plates of
Nile silt without distinguished rim which seem to have been
inspired by some more or less unspecified forms of Late Roman
pottery. The pottery from Upper Egypt is represented by two
pieces: a cup decorated at its widest point with pairs of red and
black dots on a cream slip and a conical cup (a chalice) decorated
in the same colours, depicting a flying bird (Fig. 6). An interest-
ing sherd with decoration is the upper part of a large storage jar
on which birds are shown. Analogous vessels are on display in
the Coptic Museum in Cairo; they are biconical, on a ring base,
with four handles set at equal intervals around the maximum
diameter. The decoration on these vessels includes fish and other
animals beside birds.
An interesting group are fragments of plates with bowls
made of Nile silt. Most of them are unfortunately very small
fragments. Two of the plates could be reconstructed sufficiently
to permit the whole shape to be recorded (Fig. 7). On each of the
plates there was a central larger depression around which there
were four additional bowl-like depressions; of these just one was
preserved in each case. All the sherds of this type are covered
with a light slip (beige or white), while some fragments are
further decorated with brown or red paint. These plates do not
form a homogeneous group; the clay is different, as is the colour
of the slip and the form of the rims. All this would suggest that
the plates are not morphologically homogeneous and that they
need not have been created at one time or in one workshop.
Perhaps when compared with fragments of compound vessels
discovered at Naqlun it will be possible to draw closer to