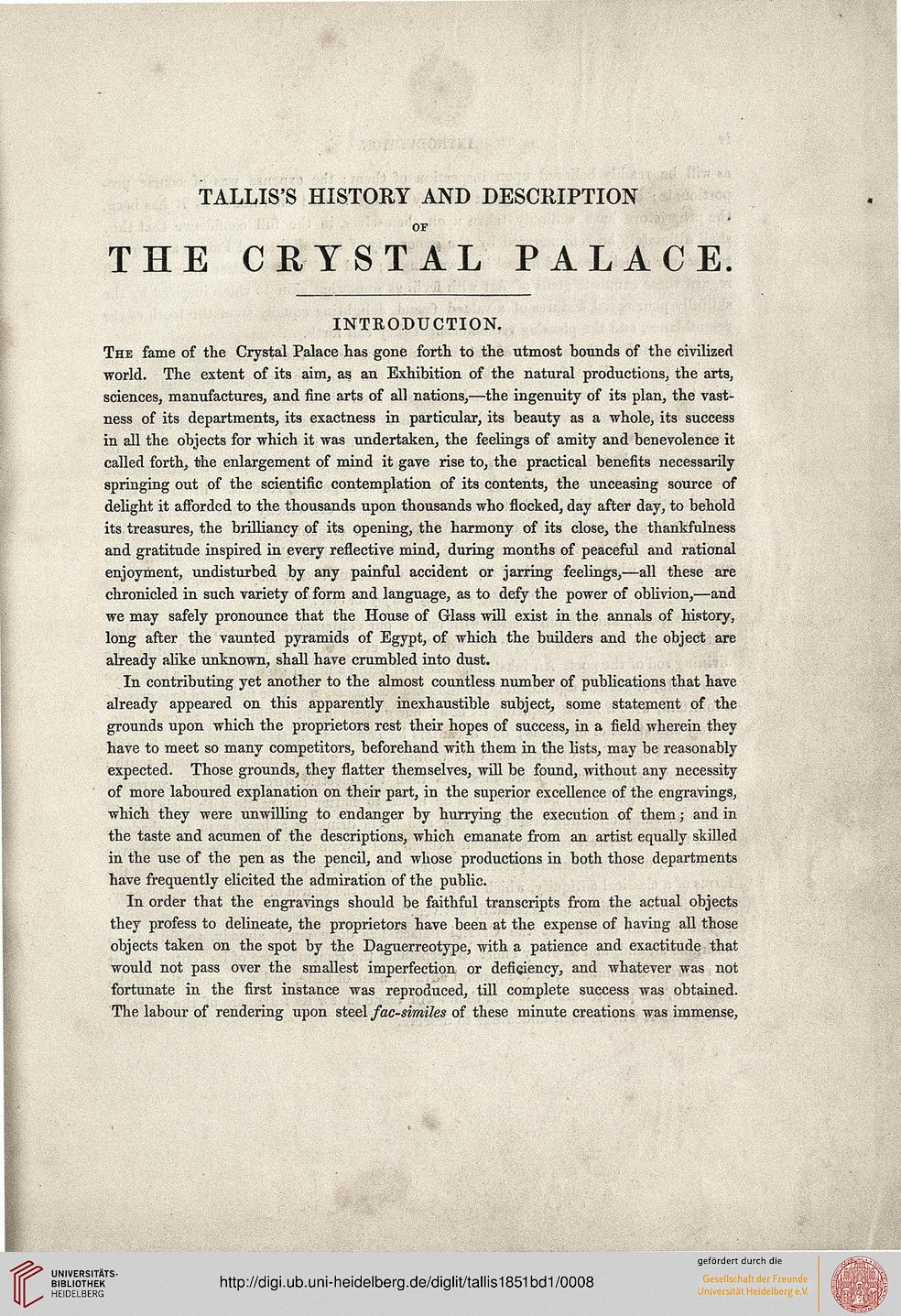 The fame of the Crystal Palace has gone forth to the utmost bounds of the civilized
world. The extent of its aim, as an Exhibition of the natural productions, the arts,
sciences, manufactures, and fine arts of all nations,—the ingenuity of its plan, the vast-
ness of its departments, its exactness in particular, its beauty as a whole, its success
in all the objects for which it was undertaken, the feelings of amity and benevolence it
called forth, the enlargement of mind it gave rise to, the practical benefits necessarily
springing out of the scientific contemplation of its contents, the unceasing source of
delight it afforded to the thousands upon thousands who flocked, day after day, to behold
its treasures, the brilliancy of its opening, the harmony of its close, the thankfulness
and gratitude inspired in every reflective mind, during months of peaceful and rational
enjoyment, undisturbed by any painful accident or jarring feelings,—all these are
chronicled in such variety of form and language, as to defy the power of oblivion,—and
we may safely pronounce that the House of Glass will exist in the annals of history,
long after the vaunted pyramids of Egypt, of which the builders and the object are
already alike unknown, shall have crumbled into dust.

In contributing yet another to the almost countless number of publications that have
already appeared on this apparently inexhaustible subject, some statement of the
grounds upon which the proprietors rest their hopes of success, in a field wherein they
have to meet so many competitors, beforehand with them in the lists, may be reasonably
expected. Those grounds, they flatter themselves, will be found, without any necessity
of more laboured explanation on their part, in the superior excellence of the engravings,
which they were unwilling to endanger by hurrying the execution of them j and in
the taste and acumen of the descriptions, which emanate from an artist equally skilled
in the use of the pen as the pencil, and whose productions in both those departments
have frequently elicited the admiration of the public.

In order that the engravings should be faithful transcripts from the actual objects
they profess to delineate, the proprietors have been at the expense of having all those
objects taken on the spot by the Daguerreotype, with a patience and exactitude that
would not pass over the smallest imperfection or deficiency, and whatever was not
fortunate in the first instauce was reproduced, till complete success was obtained.
The labour of rendering upon steel facsimiles of these minute creations was immense,