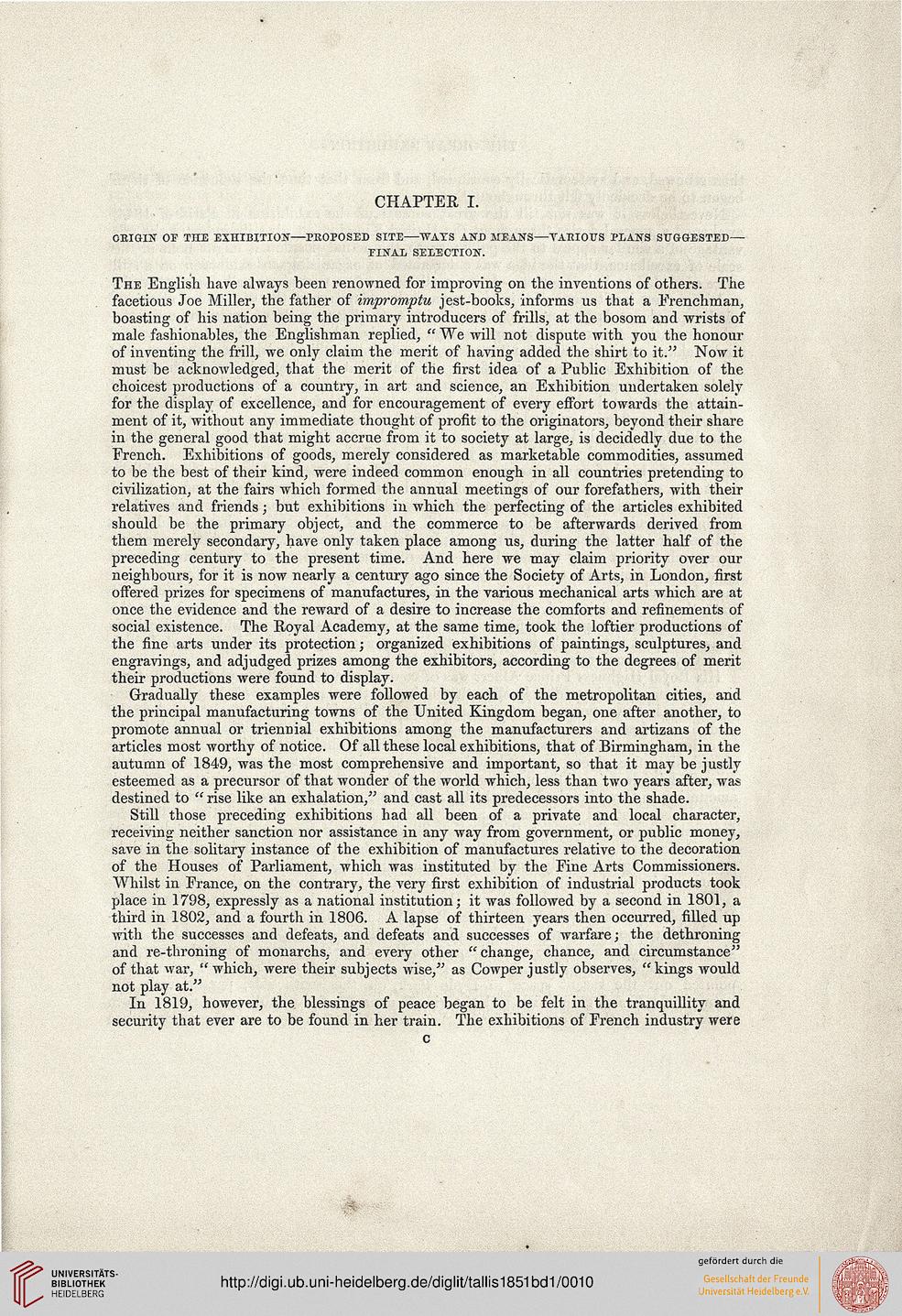 Information about OCR text
CHAPTER I.

The English have always been renowned for improving on the inventions of others. The
facetious Joe Miller, the father of impromptu jest-books, informs us that a Frenchman,
boasting of his nation being the primary introducers of frills, at the bosom and wrists of
male fashionables, the Englishman replied, " We will not dispute with you the honour
of inventing the frill, we only claim the merit of having added the shirt to it." Now it
must be acknowledged, that the merit of the first idea of a Public Exhibition of the
choicest productions of a country, in art and science, an Exhibition undertaken solely
for the display of excellence, and for encouragement of every effort towards the attain-
ment of it, without any immediate thought of profit to the originators, beyond their share
in the general good that might accrue from it to society at large, is decidedly due to the
French. Exhibitions of goods, merely considered as marketable commodities, assumed
to be the best of their kind, were indeed common enough in all countries pretending to
civilization, at the fairs which formed the annual meetings of our forefathers, with their
relatives and friends; but exhibitions in which the perfecting of the articles exhibited
should be the primary object, and the commerce to be afterwards derived from
them merely secondary, have only taken place among us, during the latter half of the
preceding century to the present time. And here we may claim priority over our
neighbours, for it is now nearly a century ago since the Society of Arts, in London, first
offered prizes for specimens of manufactures, in the various mechanical arts which are at
once the evidence and the reward of a desire to increase the comforts and refinements of
social existence. The Royal Academy, at the same time, took the loftier productions of
the fine arts under its protection; organized exhibitions of paintings, sculptures, and
engravings, and adjudged prizes among the exhibitors, according to the degrees of merit
their productions were found to display.

Gradually these examples were followed by each of the metropolitan cities, and
the principal manufacturing towns of the United Kingdom began, one after another, to
promote annual or triennial exhibitions among the manufacturers and artizans of the
articles most worthy of notice. Of all these local exhibitions, that of Birmingham, in the
autumn of 1849, was the most comprehensive and important, so that it may be justly
esteemed as a precursor of that wonder of the world which, less than two years after, was
destined to "rise like an exhalation," and cast all its predecessors into the shade.

Still those preceding exhibitions had all been of a private and local character,
receiving neither sanction nor assistance in any way from government, or public money,
save in the solitary instance of the exhibition of manufactures relative to the decoration
of the Houses of Parliament, which was instituted by the Fine Arts Commissioners.
Whilst in France, on the contrary, the very first exhibition of industrial products took
place in 1798, expressly as a national institution; it was followed by a second in 1801, a
third in 1802, and a fourth in 1806. A lapse of thirteen years then occurred, filled up
with the successes and defeats, and defeats and successes of warfare; the dethroning
and re-throning of monarchs, and every other " change, chance, and circumstance"
of that wax*, "which, were their subjects wise," as Cowper justly observes, "kings would
not play at."

In 1819, however, the blessings of peace began to be felt in the tranquillity and
security that ever are to be found in her train. The exhibitions of French industry were