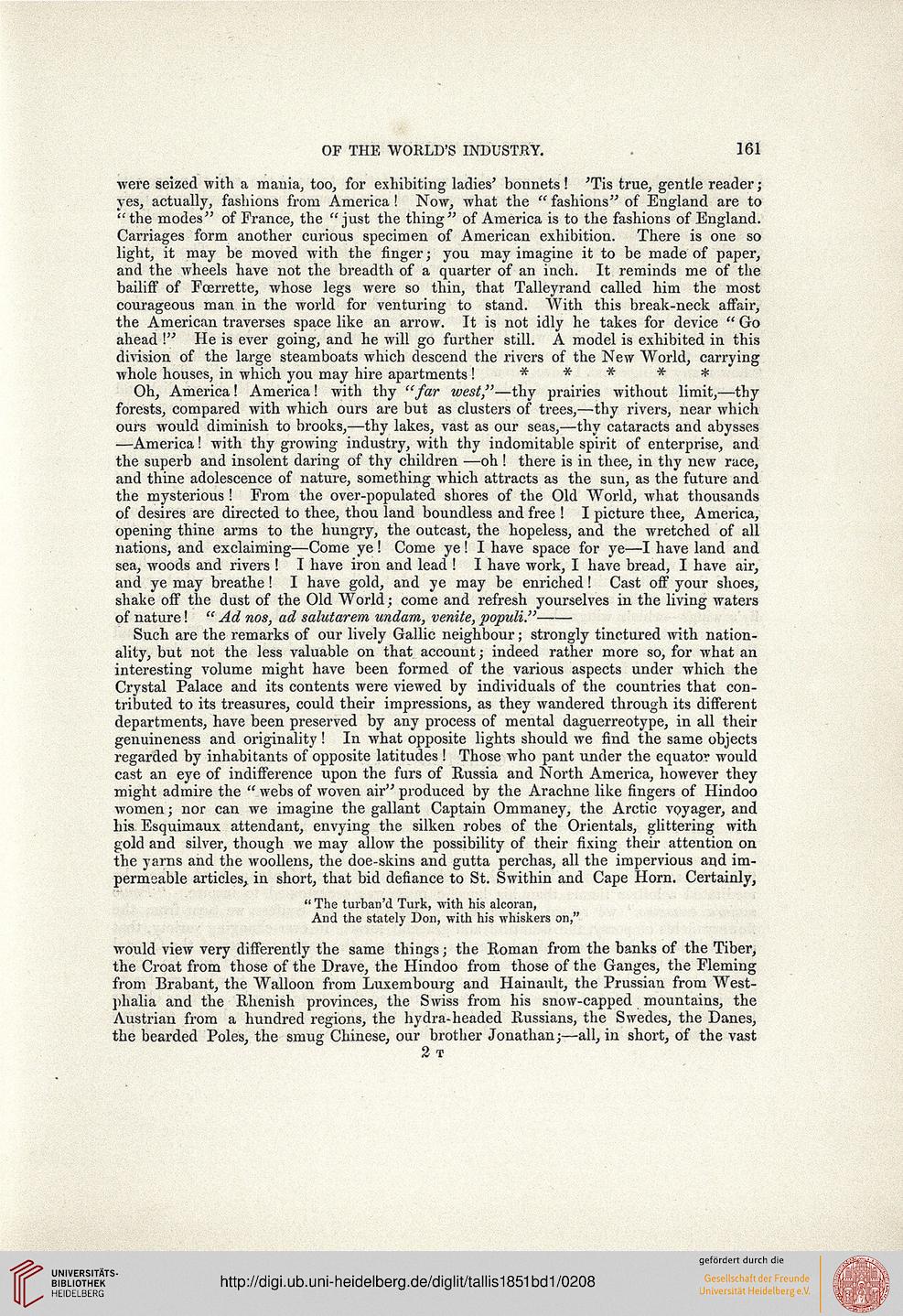 Information about OCR text
OF THE "WORLD'S INDUSTBY. . 161

were seized with a mania, too, for exhibiting ladies' bonnets ! JTis true, gentle reader;
yes, actually, fashions from America ! Now, what the " fashions" of England are to
"the modes" of France, the "just the thing" of America is to the fashions of England.
Carriages form another curious specimen of American exhibition. There is one so
light, it may be moved with the finger; you may imagine it to be made of paper,
and the wheels have not the breadth of a quarter of an inch. It reminds me of the
bailiff of Fcerrette, whose legs were so thin, that Talleyrand called him the most
courageous man in the world for venturing to stand. With this break-neck affair,
the American travei'ses space like an arrow. It is not idly he takes for device " Go
ahead !" He is ever going, and he will go further still. A model is exhibited in this
division of the large steamboats which descend the rivers of the New World, carrying
whole houses, in which you may hire apartments ! *****

Oh, America! America! with thy "far west"—thy prairies without limit,—thy
forests, compared with which ours are but as clusters of trees,—'thy rivers, near which
ours would diminish to brooks,—thy lakes, vast as our seas,—thy cataracts and abysses
—America! with thy growing industry, with thy indomitable spirit of enterprise, and
the superb and insolent daring of thy children —oh ! there is in thee, in thy new race,
and thine adolescence of nature, something which attracts as the sun, as the future and
the mysterious ! From the over-populated shores of the Old World, what thousands
of desires are directed to thee, thou land boundless and free ! I picture thee, America,
opening thine arms to the hungry, the outcast, the hopeless, and the wretched of all
nations, and exclaiming—Come ye! Come ye! I have space for ye—I have land and
sea, woods and rivers ! I have iron and lead ! I have work, I have bread, I have air,
and ye may breathe! I have gold, and ye may be enriched! Cast off your shoes,
shake off the dust of the Old World; come and refresh yourselves in the living waters
of nature! " Ad nos, ad salutarem undam, venite, populi."------

Such are the remarks of our lively Gallic neighbour; strongly tinctured with nation-
ality, but not the less valuable on that account; indeed rather more so, for what an
interesting volume might have been formed of the various aspects under which the
Crystal Palace and its contents were viewed by individuals of the countries that con-
tributed to its treasures, could their impressions, as they wandered through its different
departments, have been preserved by any process of mental daguerreotype, in all their
genuineness and originality! In what opposite lights should we find the same objects
regarded by inhabitants of opposite latitudes ! Those who pant under the equator would
cast an eye of indifference upon the furs of Russia and North America, however they
might admire the " webs of woven air" produced by the Arachne like fingers of Hindoo
women; nor can we imagine the gallant Captain Ommaney, the Arctic voyager, and
his Esquimaux attendant, envying the silken robes of the Orientals, glittering with
gold and silver, though we may allow the possibility of their fixing their attention on
the yarns and the woollens, the doe-skins and gutta perchas, all the impervious and im-
permeable articles,, in short, that bid defiance to St. Swithin and Cape Horn. Certainly,

" The turban'd Turk, with his alcoran,
And the stately Don, with his whiskers on,"

would view very differently the same things; the Roman from the banks of the Tiber,
the Croat from those of the Drave, the Hindoo from those of the Ganges, the Fleming
from Brabant, the Walloon from Luxembourg and Hainault, the Prussian from West-
phalia and the Rhenish provinces, the Swiss from his snow-capped mountains, the
Austrian from a hundred regions, the hydra-headed Russians, the Swedes, the Danes,
the bearded Poles, the smug Chinese, our brother Jonathan;—all, in short, of the vast