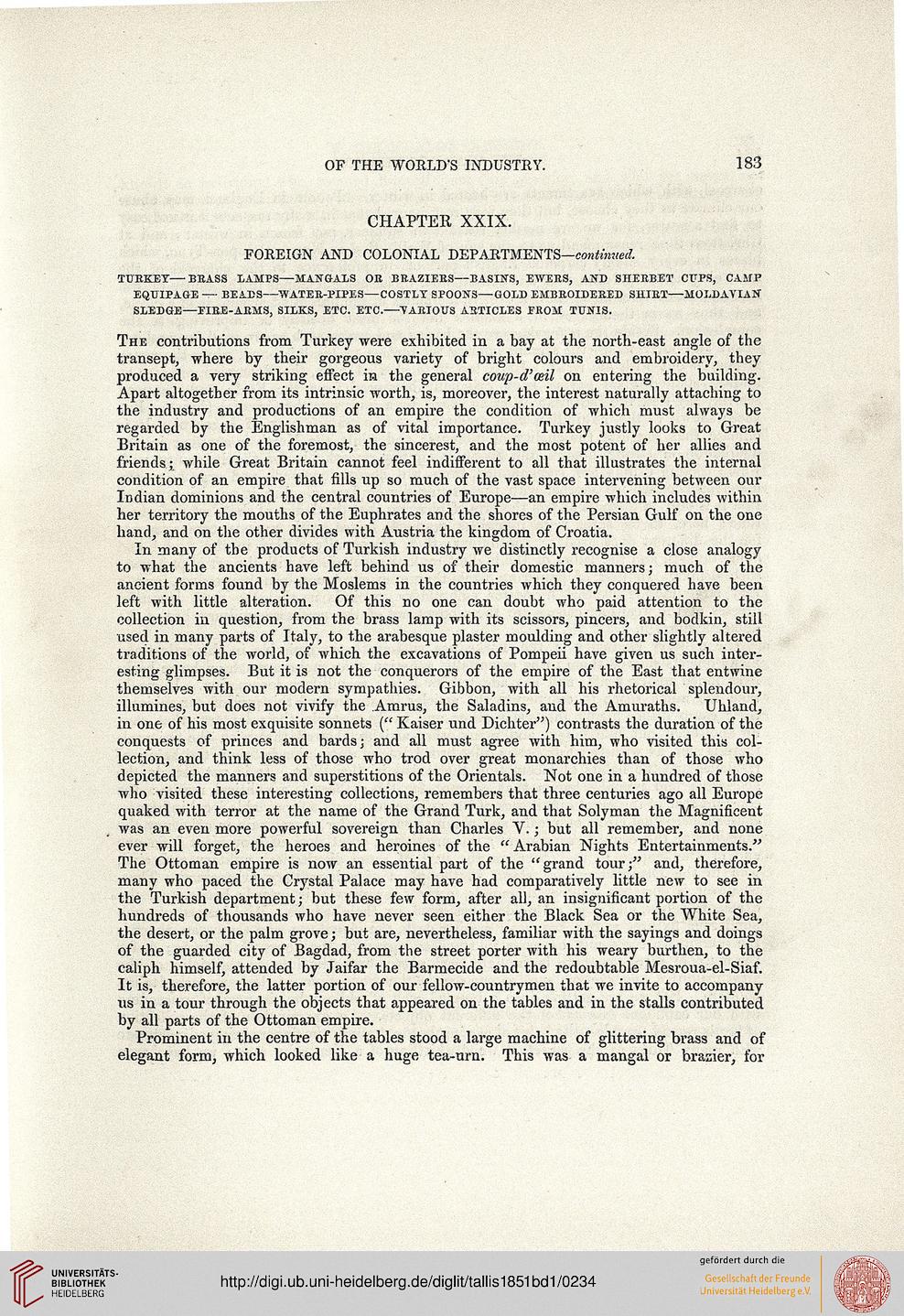 Information about OCR text
OF THE WORLD'S INDUSTRY. 183

The contributions from Turkey were exhibited in a bay at the north-east angle of the
transept, where by their gorgeous variety of bright colours and embroidery, they
produced a very striking effect in the general coup-d'ceil on entering the building.
Apart altogether from its intrinsic worth, is, moreover, the interest naturally attaching to
the industry and productions of an empire the condition of which must always be
regarded by the Englishman as of vital importance. Turkey justly looks to Great
Britain as one of the foremost, the sincerest, and the most potent of her allies and
friends; while Great Britain cannot feel indifferent to all that illustrates the internal
condition of an empire that fills up so much of the vast space intervening between our
Indian dominions and the central countries of Europe—an empire which includes within
her territory the mouths of the Euphrates and the snores of the Persian Gulf on the one
hand, and on the other divides with Austria the kingdom of Croatia.

In many of the products of Turkish industry we distinctly recognise a close analogy
to what the ancients have left behind us of their domestic manners; much of the
ancient forms found by the Moslems in the countries which they conquered have been
left with little alteration. Of this no one can doubt who paid attention to the
collection in question, from the brass lamp with its scissors, pincers, and bodkin, still
used in many parts of Italy, to the arabesque plaster moulding and other slightly altered
traditions of the world, of which the excavations of Pompeii have given us such inter-
esting glimpses. But it is not the conquerors of the empire of the East that entwine
themselves with our modern sympathies. Gibbon, with all his rhetorical splendour,
illumines, but does not vivify the Amrus, the Saladins, and the Amuraths. Uhland,
in one of his most exquisite sonnets (" Kaiser und Dichter") contrasts the duration of the
conquests of princes and bards; and all must agree with him, who visited this col-
lection, and think less of those who trod over great monarchies than of those who
depicted the manners and superstitions of the Orientals. Not one in a hundred of those
who visited these interesting collections, remembers that three centuries ago all Europe
quaked with terror at the name of the Grand Turk, and that Solyman the Magnificent
was an even more powerful sovereign than Charles Y.; but all remember, and none
ever will forget, the heroes and heroines of the " Arabian Nights Entertainments."
The Ottoman empire is now an essential part of the "grand tour;" and, therefore,
many who paced the Crystal Palace may have had comparatively little new to see in
the Turkish department; but these few form, after all, an insignificant portion of the
hundreds of thousands who have never seen either the Black Sea or the White Sea,
the desert, or the palm grove; but are, nevertheless, familiar with the sayings and doings
of the guarded city of Bagdad, from the street porter with his weary burthen, to the
caliph himself, attended by Jaifar the Barmecide and the redoubtable Mesroua-el-Siaf.
It is, therefore, the latter portion of our fellow-countrymen that we invite to accompany
us in a tour through the objects that appeared on the tables and in the stalls contributed
by all parts of the Ottoman empire.

Prominent in the centre of the tables stood a large machine of glittering brass and of
elegant form, which looked like a huge tea-urn. This was a mangal or brazier, for