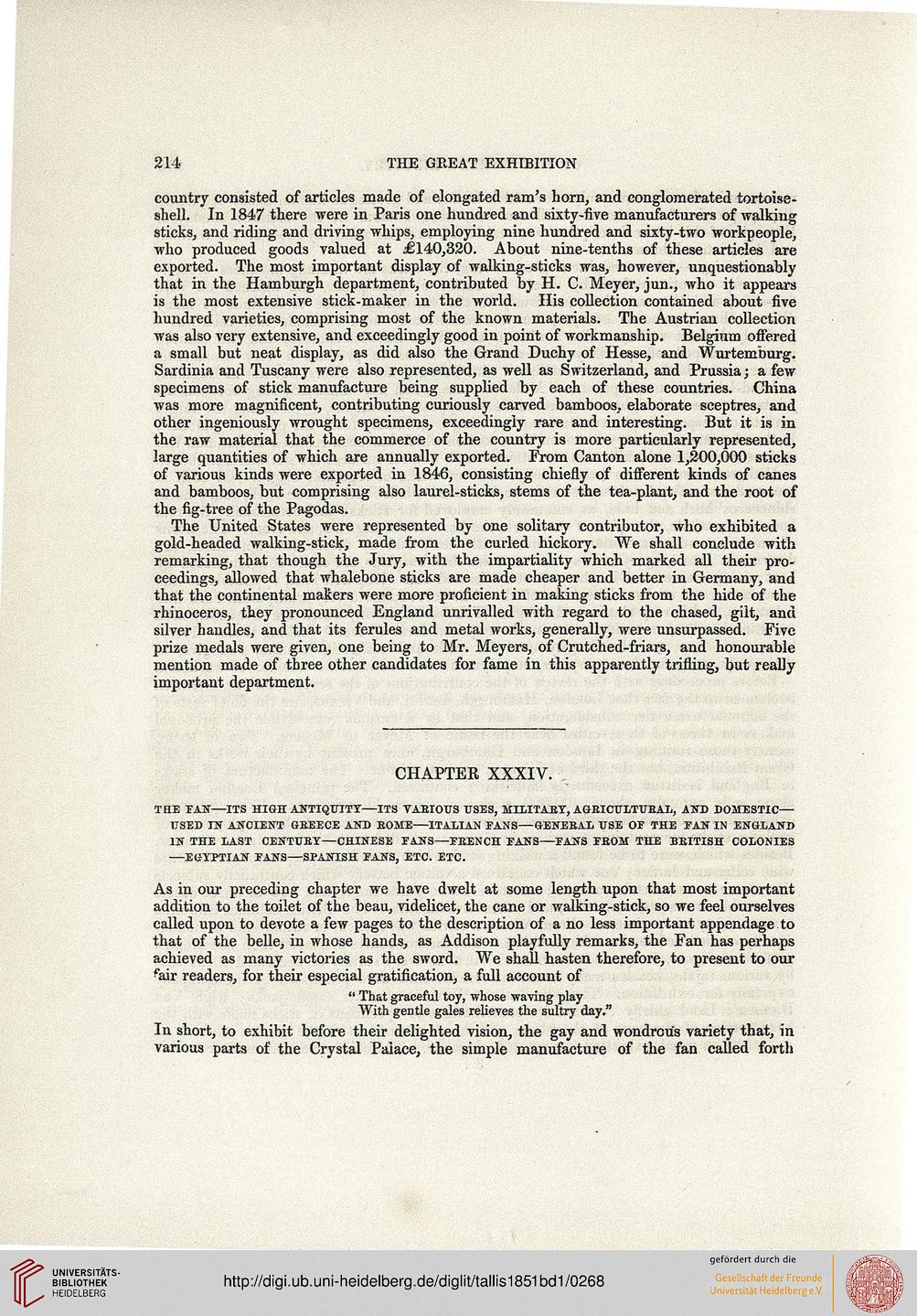 country consisted of articles made of elongated ram's horn, and conglomerated tortoise-
shell. In 1847 there were in Paris one hundred and sixty-five manufacturers of walking
sticks, and riding and driving whips, employing nine hundred and sixty-two workpeople,
who produced goods valued at £140,320. About nine-tenths of these articles are
exported. The most important display of walking-sticks was, however, unquestionably
that in the Hamburgh department, contributed by H. C. Meyer, jun., who it appears
is the most extensive stick-maker in the world. His collection contained about five
hundred varieties, comprising most of the known materials. The Austrian collection
was also very extensive, and exceedingly good in point of workmanship. Belgium offered
a small but neat display, as did also the Grand Duchy of Hesse, and Wurtemburg.
Sardinia and Tuscany were also represented, as well as Switzerland, and Prussia; a few
specimens of stick manufacture being supplied by each of these countries. China
was more magnificent, contributing curiously carved bamboos, elaborate sceptres, and
other ingeniously wrought specimens, exceedingly rare and interesting. But it is in
the raw material that the commerce of the country is more particularly represented,
large quantities of which are annually exported. From Canton alone 1,200,000 sticks
of various kinds were exported in 1846, consisting chiefly of different kinds of canes
and bamboos, but comprising also laurel-sticks, stems of the tea-plant, and the root of
the fig-tree of the Pagodas.

The United States were represented by one solitary contributor, who exhibited a
gold-headed walking-stick, made from the curled hickory. "We shall conclude with
remarking, that though tide Jury, with the impartiality which marked all their pro-
ceedings, allowed that whalebone sticks are made cheaper and better in Germany, and
that the continental makers were more proficient in making sticks from the hide of the
rhinoceros, they pronounced England unrivalled with regard to the chased, gilt, ana
silver handles, and that its ferules and metal works, generally, were unsurpassed. Five
prize medals were given, one being to Mr. Meyers, of Crutched-friars, and honourable
mention made of three other candidates for fame in this apparently trifling, but really
important department.

As in our preceding chapter we have dwelt at some length upon that most important
addition to the toilet of the beau, videlicet, the cane or walking-stick, so we feel ourselves
called upon to devote a few pages to the description of a no less important appendage.to
that of the belle, in whose hands, as Addison playfully remarks, the Fan has perhaps
achieved as many victories as the sword. "We shall hasten therefore, to present to our
fair readers, for their especial gratification, a full account of

" That graceful toy, whose waving play
"With gentle gales relieves the sultry day."

In short, to exhibit before their delighted vision, the gay and wondrous variety that, in
various parts of the Crystal Palace, the simple manufacture of the fan called forth