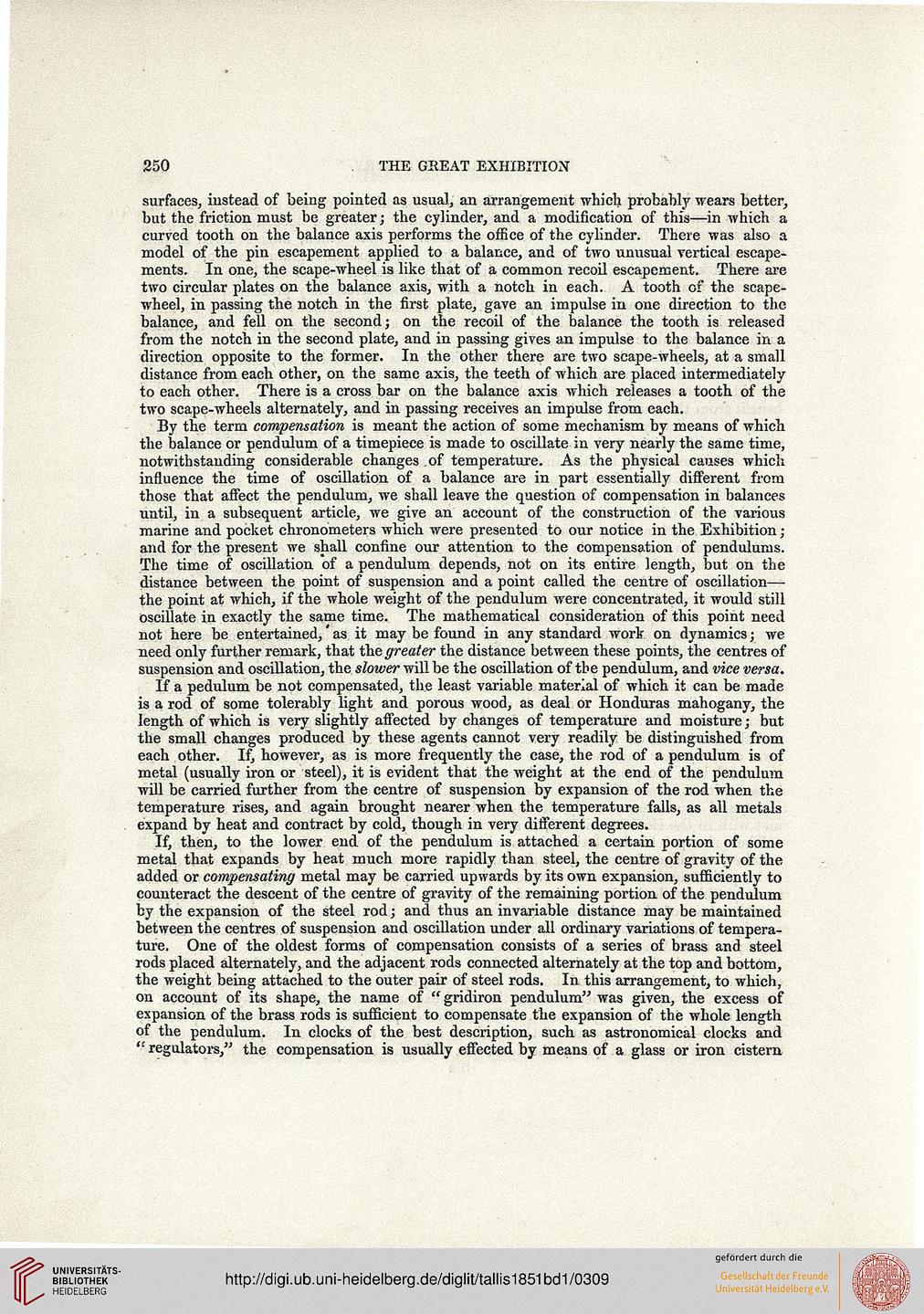 surfaces, instead of being pointed as usual, an arrangement which probably wears better,
but the friction must be greater; the cylinder, and a modification of this—in which a
curved tooth on the balance axis performs the office of the cylinder. There was also a
model of the pin escapement applied to a balance, and of two unusual vertical escape-
ments. In one, the scape-wheel is like that of a common recoil escapement. There are
two circular plates on the balance axis, with, a notch in each. A tooth of the scape-
wheel, in passing the notch in the first plate, gave an impulse in one direction to the
balance, and fell on the second; on the recoil of the balance the tooth is released
from the notch in the second plate, and in passing gives an. impulse to the balance in a
direction opposite to the former. In the other there are two scape-wheels, at a small
distance from each other, on the same axis, the teeth of which are placed intermediately
to each other. There is a cross bar on the balance axis which releases a tooth of the
two scape-wheels alternately, and in passing receives an impulse from each.

By the term compensation is meant the action of some mechanism by means of which
the balance or pendulum of a timepiece is made to oscillate in very nearly the same time,
notwithstanding considerable changes of temperature. As the physical causes which
influence the time of oscillation of a balance are in part essentially different from
those that affect the pendulum, we shall leave the question of compensation in balances
until, in a subsequent article, we give an account of the construction of the various
marine and pocket chronometers which were presented to our notice in the Exhibition ;
and for the present we shall confine our attention to the compensation of pendulums.
The time of oscillation of a pendulum depends, not on its entire length, but on the
distance between the point of suspension and a point called the centre of oscillation—
the point at which, if the whole weight of the pendulum were concentrated, it would still
oscillate in exactly the same time. The mathematical consideration of this point need
not here be entertained, * as it may be found in any standard work on dynamics; we
need only further remark, that the greater the distance between these points, the centres of
suspension and oscillation, the slower will be the oscillation of the pendulum, and vice versa.

If a pedulum be not compensated, the least variable material of which it can be made
is a rod of some tolerably light and porous wood, as deal or Honduras mahogany, the
length of which is very slightly affected by changes of temperature and moisture; but
the small changes produced by these agents cannot very readily be distinguished from
each other. If, however, as is more frequently the case, the rod of a pendulum is of
metal (usually iron or steel), it is evident that the weight at the end of the pendulum
will be carried further from the centre of suspension by expansion of the rod when the
temperature rises, and again brought nearer when the temperature falls, as all metals
expand by heat and contract by cold, though in very different degrees.

If, then, to the lower end of the pendulum is attached a certain portion of some
metal that expands by heat much more rapidly than steel, the centre of gravity of the
added or compensating metal may be carried upwards by its own expansion, sufficiently to
counteract the descent of the centre of gravity of the remaining portion of the pendulum
by the expansion of the steel rod; and thus an invariable distance may be maintained
between the centres of suspension and oscillation under all ordinary variations of tempera-
ture. One of the oldest forms of compensation consists of a series of brass and steel
rods placed alternately, and the adjacent rods connected alternately at the top and bottom,
the weight being attached to the outer pair of steel rods. In this arrangement, to which,
on account of its shape, the name of " gridiron pendulum" was given, the excess of
expansion of the brass rods is sufficient to compensate the expansion of the whole length
of the pendulum. In clocks of the best description, such as astronomical clocks and
" regulators," the compensation is usually effected by means of a glass or iron cistern