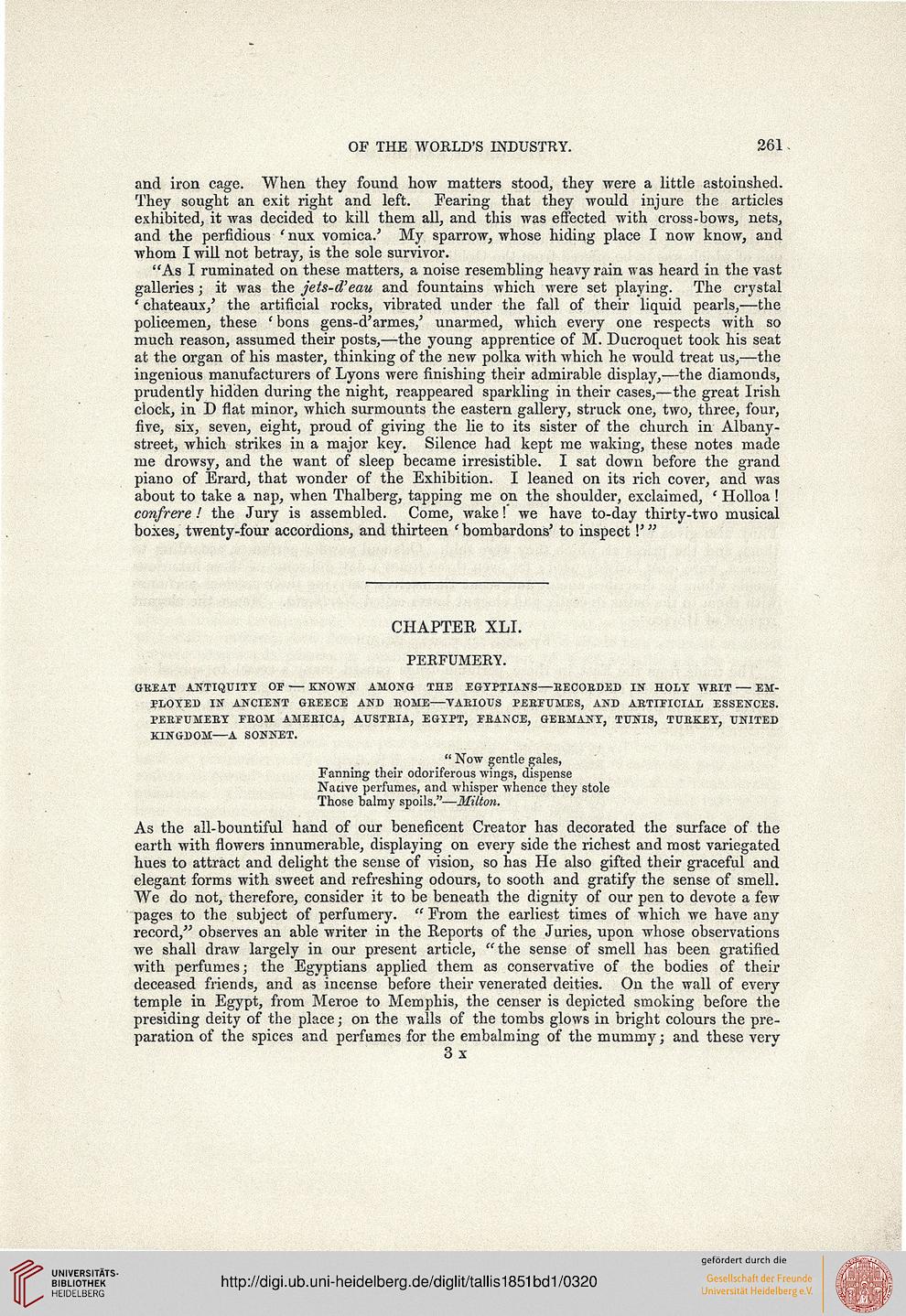 Information about OCR text
OF THE WORLD'S INDUSTRY. 261,

and iron cage. When they found how matters stood, they were a little astoinshed.
They sought an exit right and left. Fearing that they would injure the articles
exhibited, it was decided to kill them, all, and this was effected with cross-bows, nets,
and the perfidious *nux vomica.' My sparrow, whose hiding place I now know, and
whom I will not betray, is the sole survivor.

"As I ruminated on these matters, a noise resembling heavy rain was heard in the vast
galleries; it was the jets-d'eau and fountains which were set playing. The crystal
(chateaux/ the artificial rocks, vibrated under the fall of their liquid pearls,—the
policemen, these ' bons gens-d'armes,' unarmed, "which every one respects with so
much reason, assumed their posts,—the young apprentice of M. Ducroquet took his seat
at the organ of his master, thinking of the new polka with which he would treat us,—the
ingenious manufacturers of Lyons were finishing their admirable display,—the diamonds,
prudently hidden during the night, reappeared sparkling in their cases,—the great Irish
clock, in D flat minor, which surmounts the eastern gallery, struck one, two, three, four,
five, six, seven, eight, proud of giving the lie to its sister of the church in Albany-
street, which strikes in a major key. Silence had kept me waking, these notes made
me drowsy, and the want of sleep became irresistible. I sat down before the grand
piano of Erard, that wonder of the Exhibition. I leaned on its rich cover, and was
about to take a nap, when Thalberg, tapping me on the shoulder, exclaimed, (Holloa !
confrere! the Jury is assembled. Come, wake! we have to-day thirty-two musical
boxes, twenty-four accordions, and thirteen 'bombardons' to inspect!'"

As the all-bountiful hand of our beneficent Creator has decorated the surface of the
earth with flowers innumerable, displaying on every side the richest and most variegated
hues to attract and delight the sense of vision, so has He also gifted their graceful and
elegant forms with sweet and refreshing odours, to sooth and gratify the sense of smell.
We do not, therefore, consider it to be beneath the dignity of our pen to devote a few
pages to the subject of perfumery. " From the earliest times of which we have any
record," observes an able writer in the Reports of the Juries, upon whose observations
we shall draw largely in our present article, "the sense of smell has been gratified
with perfumes; the Egyptians applied them as conservative of the bodies of their
deceased friends, and as incense before their venerated deities. On the wall of every
temple in Egypt, from Meroe to Memphis, the censer is depicted smoking before the
presiding deity of the place; on the walls of the tombs glows in bright colours the pre-
paration of the spices and perfumes for the embalming of the mummvj and these very