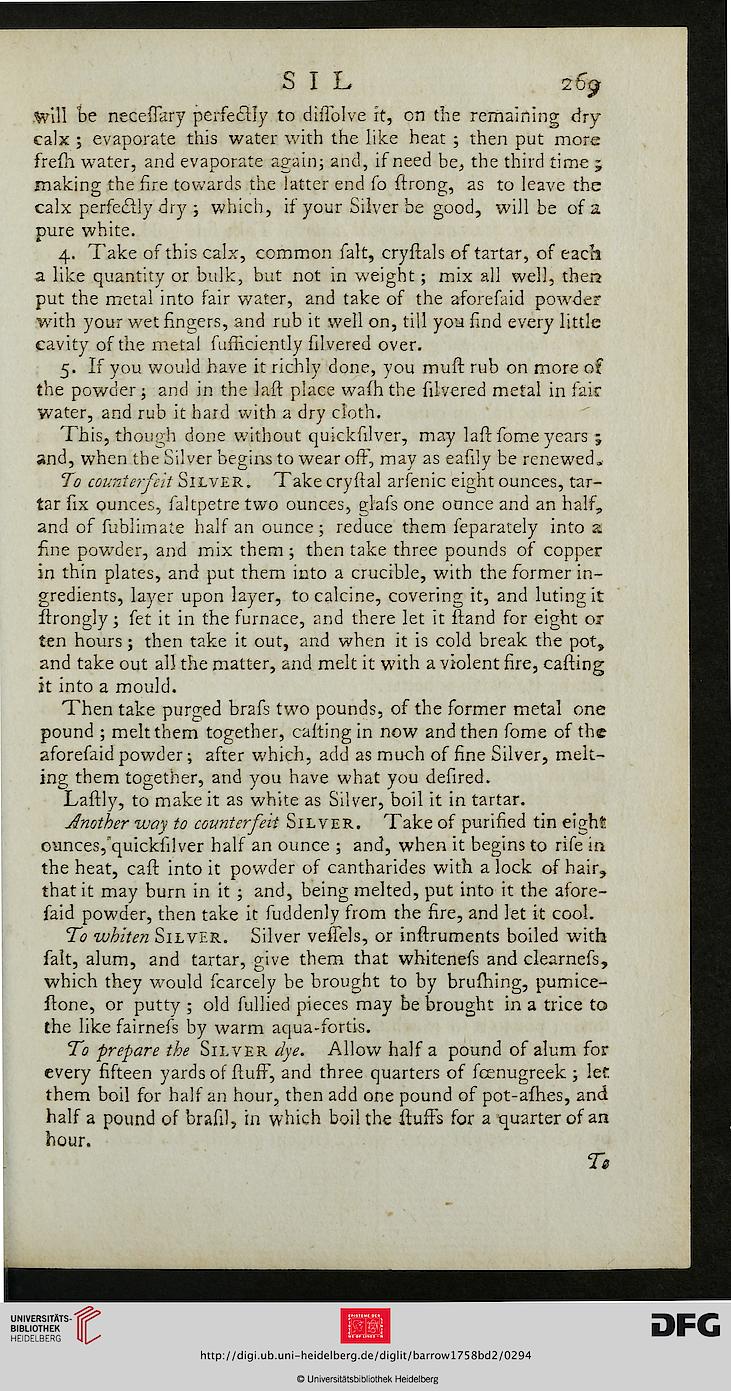 will be neceiTary perfectly to diffolve it, cn the remaining dry
calx ; evaporate this water with the like heat ; then put more
frefh water, and evaporate again; and, if need be, the third time ;
making the fire towards the latter end fo ftrong, as to leave the
calx perfectly dry ; which, if your Silver be good, will be of a
pure white.

4. Take of this calx, common fait, cryffals of tartar, of each
a like quantity or bulk, but not in weight; mix all well, then
put the metal into fair water, and take of the aforefaid powder
with your wet fingers, and rub it well on, till you find every little
cavity of the metal fufficiently filvered over.

5. If you would have it richly done, you muft rub on more of
the powder ; and in the laft place wafh the filvered metal in fair
water, and rub it hard with a dry cloth.

This, though done without quickfilver, may 1 aft fome years ;
and, when the Silver begins to wear off, may as eafily be renewed,
To counterfeit Silver. Take cryftal arfenic eight ounces, tar-
tar fix ounces, faltpetre two ounces, glafs one ounce and an half,
and of fublimate half an ounce; reduce them feparately into a
fine powder, and mix them ; then take three pounds of copper
in thin plates, and put them into a crucible, with the former in-
gredients, layer upon layer, to calcine, covering it, and luting it
ftrongly; fet it in the furnace, and there let it Hand for eight or
ten hours ; then take it out, and when it is cold break the pot,
and take out all the matter, and melt it with a violent fire, cafting
it into a mould.

Then take purged brafs two pounds, of the former metal one
pound ; melt them together, calling in now and then fome of the
aforefaid powder; after which, add as much of fine Silver, melt-
ing them together, and you have what you defired.
Laftly, to make it as white as Silver, boil it in tartar.
Another way to counterfeit Silver. Take of purified tin eight
ounces/quickiilver half an ounce ; and, when it begins to rife in
the heat, caff, into it powder of cantharides with a lock of hair,
that it may burn in it ; and, being melted, put into it the afore-
faid powder, then take it fuddenly from the fire, and let it cool.

To whiten Silver. Silver vefTels, or inftruments boiled with
fait, alum, and tartar, give them that whitenefs and clearnefs,
which they would fcarcely be brought to by brufhing, pumice-
flone, or putty ; old fullied pieces may be brought in a trice to
the like fairnefs by warm aqua-fortis.

To prepare the Silver dye. Allow half a pound of alum for
every fifteen yards of fluff, and three quarters of fcenugreek ; let
them boil for half an hour, then add one pound of pot-afhes, and
half a pound of braftl, in which boil the Huffs for a quarter of an
hour.