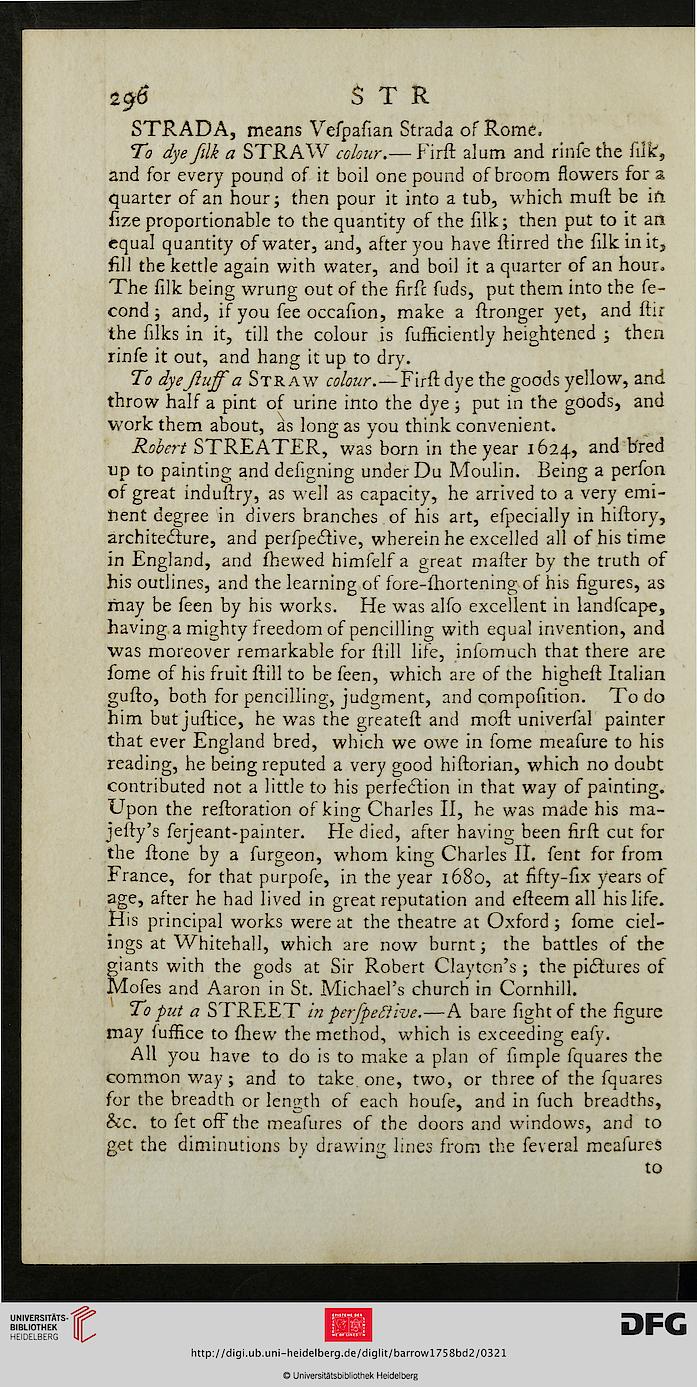 To dye filk a STRAW colour.— Firft alum and rinfe the fu%
and for every pound of it boil one pound of broom flowers for a
quarter of an hour; then pour it into a tub, which muff, be in.
fize proportionable to the quantity of the filk; then put to it an
equal quantity of water, and, after you have ftirred the filk in it,
fill the kettle again with water, and boil it a quarter of an hour,
The filk being wrung out of the firft fuds, put them into the fe-
cond ; and, if you fee occafion, make a ftronger yet, and ftir
the filks in it, till the colour is fufHciently heightened ; then
rinfe it out, and hang it up to dry.

To dyejiuff a Straw colour.—Firft dye the goods yellow, and
throw half a pint of urine into the dye 5 put in the goods, and
work them about, as long as you think convenient.

Robert STREATER, was born in the year 1624, and bred
up to painting and defigning under Du Moulin. Being a perfon
of great induftry, as well as capacity, he arrived to a very emi-
nent degree in divers branches of his art, efpecially in hiftory,
architecture, and perfpeclive, wherein he excelled all of his time
in England, and fhevved himfelf a great matter by the truth of
his outlines, and the learning of fore-fhortening of his figures, as
may be feen by his works. He was alfo excellent in landfcape,
having a mighty freedom of pencilling with equal invention, and
was moreover remarkable for ftill life, infomuch that there are
fome of his fruit ftill to be feen, which are of the higheft Italian
gufto, both for pencilling, judgment, and compofition. To do
him but juftice, he was the greateft and moft univerfal painter
that ever England bred, which we owe in fome meafure to his
reading, he being reputed a very good hiftorian, which no doubt
contributed not a little to his perfection in that way of painting.
Upon the reftoration of king Charles II, he was made his ma-
jetty's ferjeant-painter. He died, after having been firft cut for
the ftone by a furgeon, whom king Charles II. fent for from
France, for that purpofe, in the year 1680, at fifty-fix years of
age, after he had lived in great reputation and efteem all his life.
His principal works were at the theatre at Oxford; fome ciel-
ings at Whitehall, which are now burnt; the battles of the
giants with the gods at Sir Robert Clayton's ; the pictures of
Mofes and Aaron in St. Michael's church in Cornhill.

To put a STREET in perfpettive.—A bare fight of the figure
may luffice to (hew the method, which is exceeding; eafy.

All you have to do is to make a plan of limple fquares the
common way; and to take one, two, or three of the fquares
for the breadth or length of each houfe, and in fuch breadths,
Sec. tofetoffthe meafures of the doors and windows, and to
get the diminutions by drawing lines from the feveral meafures