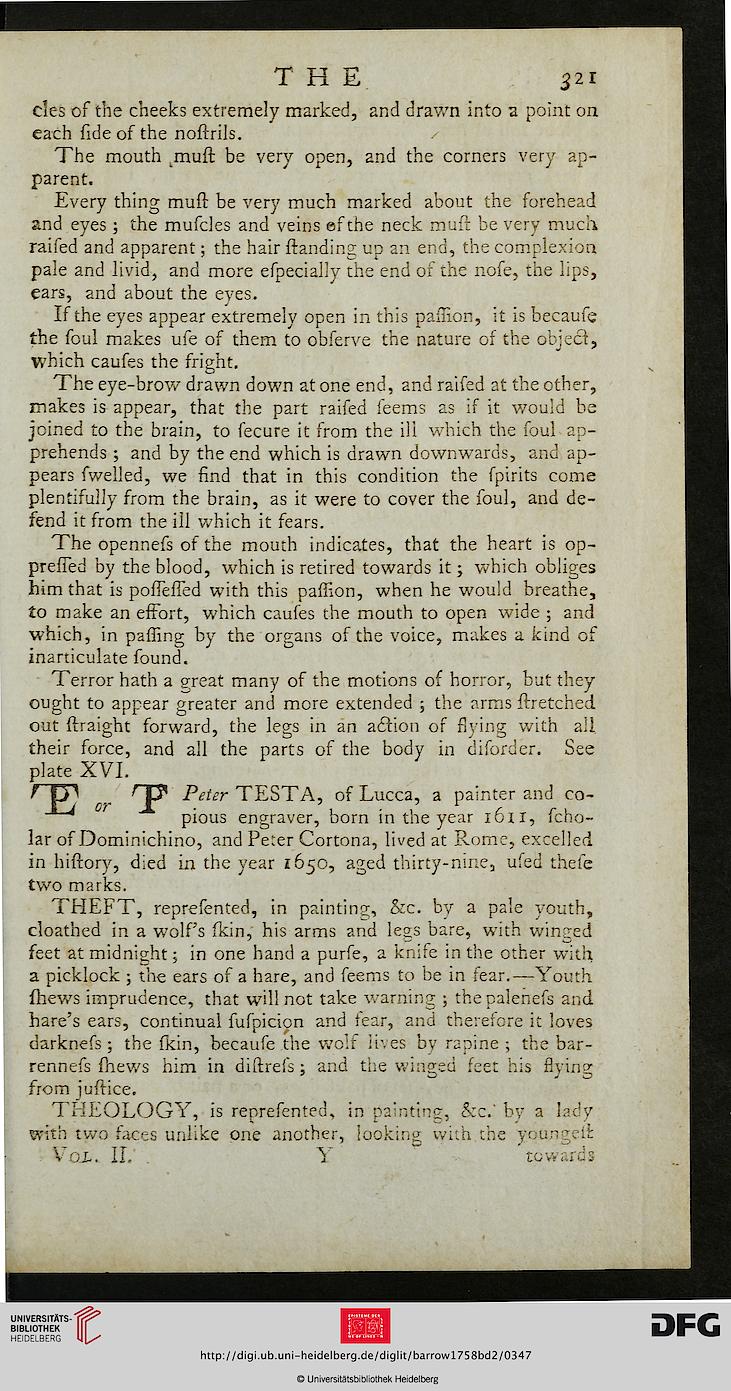 cles of the cheeks extremely marked, and drawn into a point on
each fide of the noftrils.

The mouth vmuft be very open, and the corners very ap-
parent.

Every thing muff be very much marked about the forehead
and eyes; the mufcles and veins ef the neck muft be very much
raifed and apparent; the hair ftanding up an end, the complexion
pale and livid, and more efpecially the end of the nofe, the lips,
ears, and about the eyes.

If the eyes appear extremely open in this pafllon, it is becaufe
the foul makes ufe of them to obferve the nature of the object,
which caufes the fright.

The eye-brow drawn down at one end, and raifed at the other,
makes is appear, that the part raifed feems as if it would be
joined to the brain, to fecure it from the ill which the foul ap-
prehends ; and by the end which is drawn downwards, and ap-
pears fwelled, we find that in this condition the fpirits come
plentifully from the brain, as it were to cover the foul, and de-
fend it from the ill which it fears.

The opennefs of the mouth indicates, that the heart is op-
preffed by the blood, which is retired towards it; which obliges
htm that is poffeffed with this paffion, when he would breathe,
to make an effort, which caufes the mouth to open wide ; and
which, in paffing by the organs of the voice, makes a kind of
inarticulate found.

Terror hath a great many of the motions of horror, but they
ought to appear greater and more extended ; the arms ftretched
out ftraight forward, the legs in an adtion of flying with all
their force, and all the parts of the body in diforder. See
plate XVI.

f or r Peter TESTA, of Lucca, a painter and co-
pious engraver, born in the year 1611, fcho-
lar of Dominichino, and Peter Cortona, lived at Rome, excelled
in hiftory, died in the year 1650, aged thirty-nine, ufed thefe
two marks.

THEFT, reprefented, in painting, &c. by a pale youth,
cloathed in a wolf's fkin, his arms and legs bare, with winged
feet at midnight; in one hand a purfe, a knife in the other with
a picklock ; the ears of a hare, and feems to be in fear.—Youth
fhews imprudence, that will not take warning ; thepalenefs and
hare's ears, continual fufpicion and fear, and therefore it loves
darknefs ; the fkin, becaufe the wolf lives by rapine 5 the bar-
rennefs fhews him in diftrefs ; and the winged feet his flying
from iuftice.

THEOLOGY, is reprefented, in painting, &c.' by a l&dy
with two faces unlike one another, looking with the youngclfc
Vol. II.' . Y towards