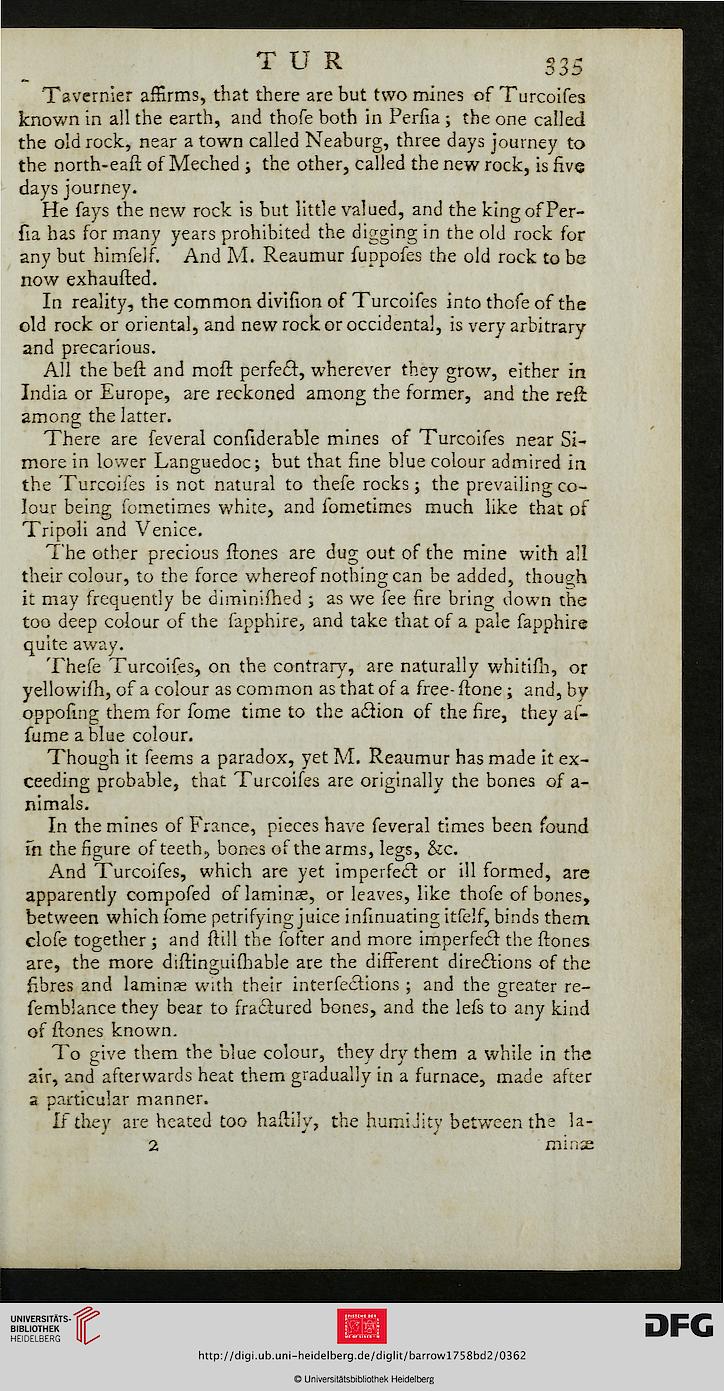 Tavernier affirms, that there are but two mines of Turcoifes
known in all the earth, and thofe both in Perfia ; the one called
the old rock, near a town called Neaburg, three days journey to
the north-eaft of Meched j the other, called the new rock, is five
days journey.

He fays the new rock is but little valued, and the king of Per-
fia has for many years prohibited the digging in the old rock for
any but himfelf. And M. Reaumur fuppofes the old rock to be
now exhaufted.

In reality, the common divifion of Turcoifes into thofe of the
old rock or oriental, and new rock or occidental, is very arbitrary
and precarious.

All the beft and moft perfect, wherever they grow, either in
India or Europe, are reckoned among the former, and the reft
among the latter.

There are feveral confiderable mines of Turcoifes near Si-
more in lower Languedoc; but that fine blue colour admired in
the Turcoifes is not natural to thefe rocks; the prevailing co-
lour being icmetirnes white, and fometimcs much like that of
Tripoli and Venice.

The other precious ftones are dug out of the mine with all
their colour, to the force whereof nothing can be added, though
it may frequently be diminifhed ; as we fee fire bring down the
too deep colour of the fapphire, and take that of a pale fapphire
quite away.

Thefe Turcoifes, on the contrary, are naturally whitifh, or
yellowifh, of a colour as common as that of a free- ffone; and, bv
oppofing them for fome time to the action of the fire, they af-
fume a blue colour.

Though it feems a paradox, yet M. Reaumur has made it ex-
ceeding probable, that Turcoifes are originally the bones of a-
nimals.

In the mines of France, pieces have feveral times been found
fn the figure of teeth, bones of the arms, legs, &c.

And Turcoifes, which are yet imperfect or ill formed, are
apparently compofed of laminae, or leaves, like thofe of bones,
between which fome petrifying juice infinuating itfelf, binds them
clofe together ; and frill the fofter and more imperfect the ftones
are, the more diftinguifhable are the different directions of the
fibres and laminae with their interfections ; and the greater re-
femblance they bear to fractured bones, and the lefs to any kind
of ftones known.

To g-ive them the blue colour, thevdrv them a while in the
air, and afterwards heat them gradually in a furnace, made after
a particular manner.

If they are heated too hafiily, the humidity between the la-
2 minae