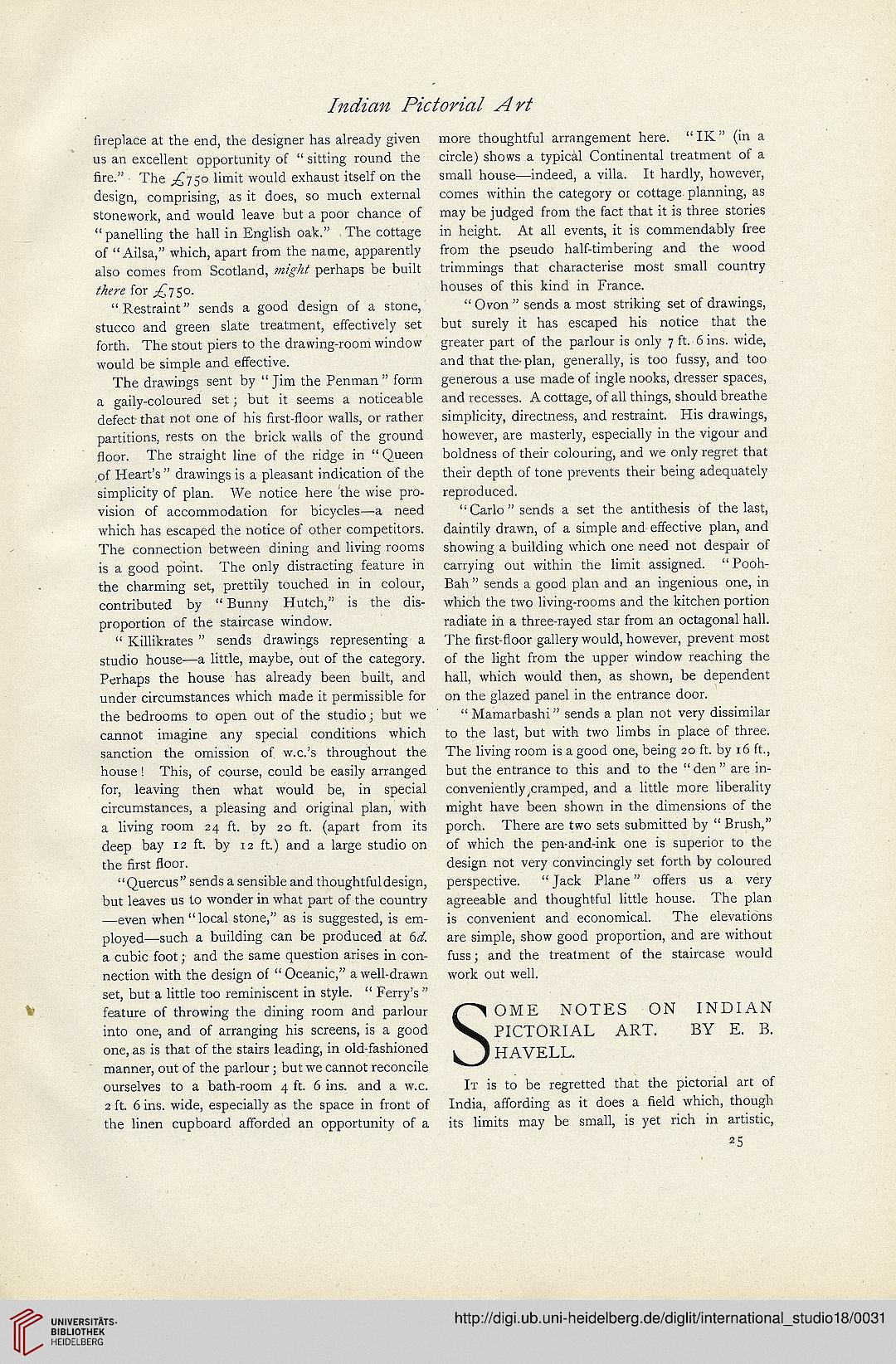 flrepla.ce at the end, the designer has already given
us an excellent opportunity of " sitting round the
hre." The _^7go limit would exhaust itself on the
design, comprising, as it does, so much external
stonework, and would leave but a poor chance of
" panelling the hall in English oak." The cottage
of " Aiisa," which, apart from the name, apparently
also comes from Scotland, perhaps be built
for ^750.
" Restraint" sends a good design of a stone,
stucco and green slate treatment, effectively set
forth. The stout piers to the drawing-room window
would be simple and effective.
The drawings sent by " Jim the Penman " form
a gaily-coloured set; but it seems a noticeable
defect that not one of his frrst-door walls, or rather
partitions, rests on the brick walls of the ground
Soor. The straight iine of the ridge in " Queen
of Heart's " drawings is a pleasant indication of the
simplicity of plan. We notice here the wise pro-
vision of accommodation for bicycles—a need
which has escaped the notice of other competitors.
The connection between dining and living rooms
is a good point. The only distracting feature in
the charming set, prettily touched in in colour,
contributed by " Bunny Hutch," is the dis-
proportion of the staircase window.
" Killikrates " sends drawings representing a
studio house—a little, maybe, out of the category.
Perhaps the house has already been built, and
under circumstances which made it permissible for
the bedrooms to open out of the studio; but we
cannot imagine any special conditions which
sanction the omission of w.c.'s throughout the
house! This, of course, could be easily arranged
for, leaving then what would be, in special
circumstances, a pleasing and original plan, with
a living room 24 ft. by 20 ft. (apart from its
deep bay 12 ft. by 12 ft.) and a large studio on
the flrst Roor.
"Quercus" sends a sensible and thoughtfuldesign,
but leaves us to wonder in what part of the country
—even when " local stone," as is suggested, is em-
ployed—such a building can be produced at 6<f.
a cubic foot; and the same question arises in con-
nection with the design of " Oceanic," a well-drawn
set, but a little too reminiscent in style. " Ferry's "
feature of throwing the dining room and parlour
into one, and of arranging his screens, is a good
one, as is that of the stairs leading, in old-fashioned
manner, out of the parlour ; but we cannot reconcile
ourselves to a bath-room 4 ft. 6 ins. and a w.c.
2 ft. 6 ins. wide, especially as the space in front of
the Hnen cupboard afforded an opportunity of a

more thoughtful arrangement here. " IK " (in a
circle) shows a typical Continental treatment of a
small house—indeed, a villa. It hardly, however,
comes within the category or cottage pianning, as
may be judged from the fact that it is three stories
in height. At all events, it is commendably free
from the pseudo half-timbering and the wood
trimmings that characterise most smali country
houses of this kind in France.
" Ovon " sends a most striking set of drawings,
but surely it has escaped his notice that the
greater part of the parlour is only 7 ft. 6 ins. wide,
and that the-plan, generally, is too fussy, and too
generous a use made of ingle nooks, dresser spaces,
and recesses. A cottage, of all things, should breathe
simplicity, directness, and restraint. His drawings,
however, are masterly, especially in the vigour and
boldness of their colouring, and we only regret that
their depth of tone prevents their being adequately
reproduced.
"Carlo"sends a set the antithesis of thelast,
daintily drawn, of a sirnple and effective plan, and
showing a building which one need not despair of
carrying out within the limit assigned. "Pooh-
Bah " sends a good plan and an ingenious one, in
which the two living-rooms and the kitchen portion
radiate in a three-rayed star from an octagonal hall.
The flrst-floor gallery would, however, prevent most
of the light from the upper window reaching the
hall, which would then, as shown, be dependent
on the glazed panel in the entrance door.
" Mamarbashi" sends a plan not very dissimilar
to the last, but with two limbs in place of three.
The living room is a good one, being 20 ft. by 16 ft.,
but the entrance to this and to the " den " are in-
conveniently cramped, and a little more liberality
might have been shown in the dimensions of the
porch. There are two sets submitted by " Brush,"
of which the pen-and-ink one is superior to the
design not very convincingly set forth by coloured
perspective. " Jack Plane" offers us a very
agreeable and thoughtful little house. The plan
is convenient and economical. The elevations
are sirnple, show good proportion, and are without
fuss; and the treatment of the staircase would
work out weil.
/^OME NOTES ON INDIAN
^^PICTORIAL ART. BY E. B.
HAVELL.
IT is to be regretted that the pictorial art of
India, affording as it does a field which, though
its limits may be small, is yet rich in artistic,
25